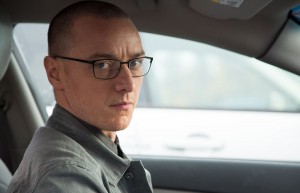 I’m not really a horror film fan. Actually, I like Alien (1979) and Dawn of the Dead (both versions -1978 and 2004) and The Vanishing (1988 – the original Dutch version). I guess I was never into the slasher horror films. I never watched your Friday the 13th or your Halloweens or you Nightmares On Elm Streets. But I was interested in this one for several reasons: 1) It’s not a slasher film. It’s more of a thriller. 2) It stars James McAvoy who I think is a very good actor. 3) It was written and directed by the infamous M. Night Shyamalan.

Shyamalan hit it big with The Sixth Sense (1999), Unbreakable (2000) and Signs (2002) and his style and Twilight Zone twist endings seemed fresh and new. But he started to see diminishing returns with his next few films. The Village (2004) was good. The Lady In The Water (2006) was not good. The happening (2008) had an interesting premise but a terrible script. The magic seemed to run out and his career went into a tailspin especially after the flop After Earth (2013). He started to work his way back in 2015 by producing the successful TV show Wayward Pines and making a low budget found footage horror film called The Visit with Blumhouse Productions (Paranormal Activity franchise). He teams up with Blumhouse again for this low budget thriller and it seems he’s found his mojo. 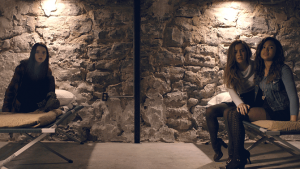 Split is about three young girls who are kidnapped by a young man named ‘Dennis’ (James McAvoy) one of 23 personalities that live inside ‘Kevin’. He keeps them captive in an underground lair where they await the coming of a mysterious person or thing called ‘The Beast’. The young women try to find a way to escape but one of them, Casey (Anya Taylor Joy) seems to have a better understanding of their situation and what to do and not to do. Dennis/Kevin also sees a therapist, Karen (Betty Buckley), who has tried to help him control his many personalities and knows something is wrong. 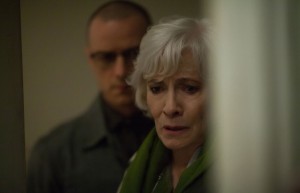 I won’t go into much more because it’s the twists and turns that make that make a film like this fun. Shyamalan’s directorial style is the same as it was from his very first film; he presents the information in a very matter a fact fashion, layering in a back story that ties into what is happening in the present and comes together for the twist at the end. There is a constant tension throughout that is unsettling and I admit, I jumped a couple of times. 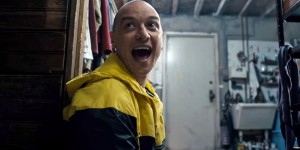 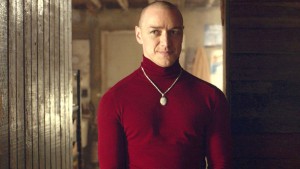 A lot of the success of the film rests on the performance of its lead and McAvoy really delivers. He is creepy. He plays the multiple personalities with complete believability. Also very good is Anya Taylor Joy who plays Casey. I didn’t recognize her, at first, because her hair was dark brown in this film but she was the lead in last year’s horror film The Witch. She’s very good and is the co-lead with McAvoy and she plays a very smart, savvy young woman who finds interesting ways to battle Dennis/Kevin.

The endings of films are always a problem and especially in this genre but Split has a very interesting ending and actually adds a ‘Marvel-like’ coda scene that hints at a sequel. Don’t miss it! I actually started clapping! I was so thrilled! I was the only one at first but then a few others joined in. I was very excited about where the possible sequel could go.

Split is a good thriller, with very good performances and a thrilling finale with a fun coda at the end! Obviously, I really enjoyed it!