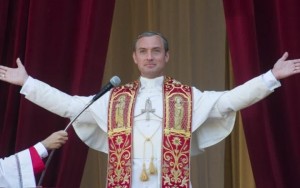 I tuned in to watch The Young Pope on HBO last night and was treated to a very interesting, disturbing, puzzling work of art. The episode began with Jude Law as The Young Pope, obviously, climbing out from under a pile of dead babies. It seemed to be a dream. But what followed also seemed very dream like. Several times I turned to look at my friend, Kyle, who looked back at me as we both wondered, “WTF?”. 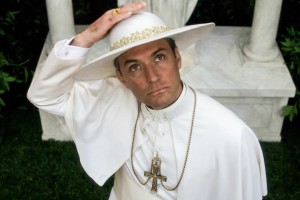 This is an Italian production created, directed and co-written by Paulo Sorrentino (Youth 2015). It’s about (I think) a young cardinal, Lenny Belardo (Law) who somehow becomes Pope. He takes the name of Pius and becomes Pope Pius VIII. There seems to have been a highly political decision to bypass the leading nominee, Cardinal Spencer (James Cromwell) for the younger Belardo, believing he would be easily manipulated to do what he was instructed. This quickly proves not to be the case. This is a new type of Pope. He is curt with people, likes shaking things up and is not beneath breaking the sanctity of the confessional to learn everyone’s dirty little secrets. Oh and he smokes. 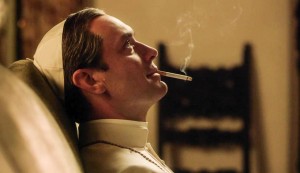 He choppers in an elderly nun, Sister Mary (Diane Keaton), who, we see in flashback, raised the young Lenny in an orphanage from the time he was seven. He seems to trust her and breaks with protocol by making her his assistant. 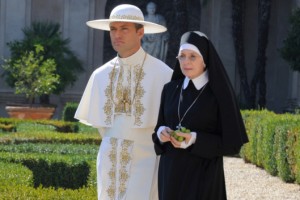 It was hard getting my footing on this one. The tone is quite abstract and seriously dark. I assume we will learn more about this ‘young pope’ and what his intentions are. The previews for the season indicate there will be a movement amongst the cardinals to upend this young trouble maker and perhaps the series will fall into a more normal narrative but we’ll see. It reminded me a little of a Stanley Kubrick film., a touch of madness rooted in a realistic setting.

The performances are good. Jude Law’s rascally Lenny seems to be ‘playing’ as Pope but you can see there is a method to his madness. I’m just not quite sure what it is. Diane Keaton as Sister Mary seems to be in on the joke. Late in the episode, Lenny confesses to a priest that he doesn’t believe in God before smiling and telling him he was kidding. Was he? 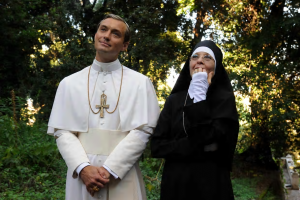 I don’t know if I like it yet. But I am intrigued and will keep watching.