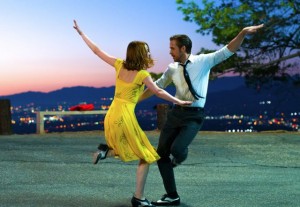 “This is the dream! It’s conflict and it’s compromise, and it’s very, very exciting!” Sebastian

This quote fits the film to a t! Sebastian (Ryan Gosling) is a serious minded jazz pianist trying to stay pure to his art and Mia (Emma Stone) is a struggling actor working as a barista on a studio lot. They don’t get along at first but eventually fall in love and struggle together to make it big in Los Angeles. Their struggles challenge their relationship as they both try to remain true to their dreams while maintaining a very real relationship. From the opening traffic jam scene on the dreaded Los Angeles freeways to the wonderful Griffith Park Observatory scene to the final big dance number La La Land reaches for that old time Hollywood magic and mostly manages to bring it. 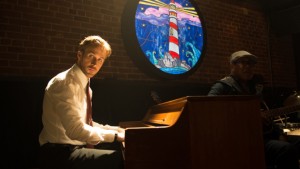 Have I mentioned that this is a musical? Oh, you knew it already! Yes, Los Angeles comes alive with magic and song and love in this delightful film which is a sweet homage to Hollywood musicals. While a lot of people think of Astaire and Rogers and those wonderful 1930’s happy musicals, I’m more reminded of those Gene Kelly –Stanley Donen directed 1950’s musicals. La La Land is a lot of Singin’ In The Rain (1951) and more than just a little of It’s Always Fair Weather (1956). 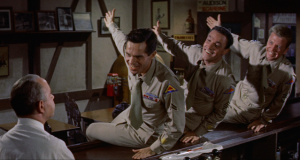 Singin’ In The Rain was itself, already homage to Hollywood’s beginnings. It was having fun with the way that movies were made and by doing so, making one of the best movies of all time. Gene Kelly, Donald O’Connor and Debbie Reynolds were all amazing dancers, singers, entertainers and they did just that. (As an FYI, my college dance instructor and musical director was a dancer in this film at the age of 18!)

It’s Always Fair Weather came at the tail end of those classic Hollywood musicals and it had a bittersweet quality which La La Land also has. 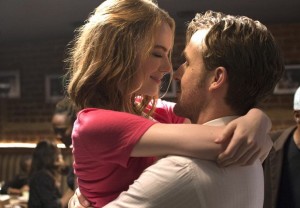 Ryan Gosling and Emma Stone are not the best singers or dancers but that doesn’t take away from the enjoyment of the film or their performances. They have a great chemistry and will hopefully keep making films together (this is their 3rd and as many genres). There are a few good songs and some good dance numbers. The main piano theme is good but not memorable and I do wish that Gosling and Stone were able to cut a rug a little better, that felt lacking. But taken as a whole, La La Land transports you to another place, magical and wistful and with likeable people to root for. The perfect confection for a Trump world. 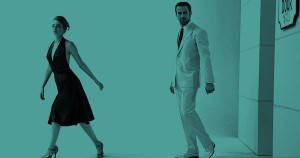 Director Damien Chazelle (Whiplash) is an incredibly talented filmmaker and it is clear that he poured a lot of heart and soul into this one. It really pays off. Modern day musicals are rare and usually animated. Chazelle fills his film with energy and inventiveness and Gosling and Stone give the film real people at the center of the dream. It’s nice to just lose yourself in an old fashioned ‘movie.

Just for a little touch of old Hollywood, here is Stanley Donen receiving his lifetime achievement award in 1997. It’ll bring a smile to your face just as La La land will.