Moonlight is an intensely personal film. Written and Directed by Barry Jenkins, based on the play In Moonlight Black Boys Look Blue by Tarell Alvin McCraney, Moonlight tells the story of a young black man, named Chiron, in three parts, as he explores questions of his own sexuality and growing up with a drug addicted parent. 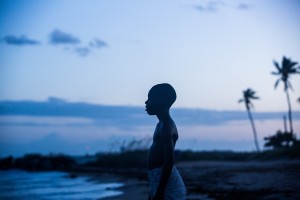 We follow Chiron as a young boy being harassed and bullied by a group of other young boys. He is mentored by Juan, a local drug dealer, who takes a liking to him and tries to help as best he can, along with his sweet and understanding girlfriend, Teresa (Janelle Monae). Chiron’s mother, Paula (Naomie Harris) is a nurse but a drug habit will worsen over the years and Chiron will look to Teresa more and more for emotional support. We then see a teenage Chiron, still the outsider and bullied but he is befriended by Kevin, a schoolmate. They form a strong bond which turns tragic. We then see an adult Chiron who has now become a carbon copy of Juan, a drug dealer. He gets a call out of the blue one day from Kevin, flooding him with both good and bad memories but maybe a chance to reconcile them and move forward.

Moonlight is quite a journey, a very sad and solitary journey for this young man who started out behind the eight ball and spends years trying to find a way to just be himself. The film is beautifully and heart achingly acted. Mahershala Ali plays Juan as a drug dealer who seems decent. He sees himself in Chiron, I suspect. He reaches out and tries to help the kid. But he is an imperfect mentor to be sure. Naomie Harris is phenomenal as Chiron’s mother. She’s not a villain. She, too, is a victim, who unfortunately, does great harm to her son. The three young actors that play Chiron, Alex Hibbert, Ashton Sanders and Trevante Rhodes are all very good. It was also good to see Andre Holland (The Knick) as adult Kevin. He’s a fine actor and he shines in the few scenes he has. 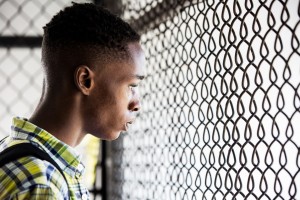 This is only Barry Jenkins second feature film and you can see it was project close to his heart. It’s a tough film and it stays with you but I felt there was some hope for this young man before all was said and done.

Previous ALLIED Next MANCHESTER BY THE SEA