Casablanca is my favorite film. So when I hear that Allied is a modern day Casablanca I have to be leery. It is not. Although the first half of the film does take place in Casablanca in 1942 (the year that Casablanca was released) it does not have the magic or romance of that film. It looks beautiful and stars ridiculously beautiful people but there’s a coldness around the heart that could not be penetrated. 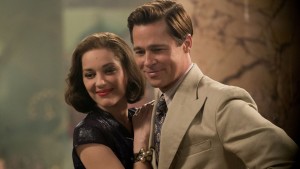 Brad Pitt plays dashing spy Max Vatan who goes to Casablanca to meet up with a French resistance fighter, Marianne Beausejour played by the lovely Marion Cotillard. They pretend to be husband and wife and cozy up to the local German officials with a plan to assassinate the German ambassador. They try to keep it professional but, come on, you’re in Casablanca on a suicide mission and you look like Brad Pitt and Marion Cotillard. You’re going to want to touch. And touch they do, in their car, in the middle of the desert during a sand storm! Their big moment comes and they manage to do their job and stay alive. So what next? “Come to England. Be my wife.” Max tells Marianne as they speed away from the scene of their assassination. “Oui Oui!” (She doesn’t actually say that but every woman in the audience did!) 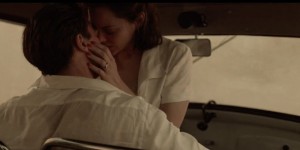 Cut to London, one year later. Max and Marianne are happily married with a little girl. All seems right in the world until Max is told that Marianne is suspected of being a German spy. He’s told they have to run a ‘blue dye’ operation. He’s to write a piece of information down and leave it for her to access. If the info is picked up in intercepted German transmissions then they’ll know she did it and he will have to personally execute her. At first, Max doesn’t believe it but eventually he starts wondering if it’s possible. Is she or isn’t she? 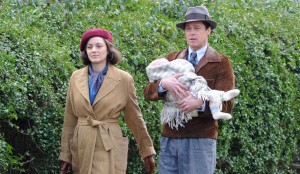 This isn’t a bad movie. It’s well made and entertaining. Only. Only as I was watching it, I kept thinking of better movies that were similar. That’s not a good thing. Cotillard is very engaging but she isn’t given much in the second half of the film. Pitt looks great but he’s stiff. I never felt the passion between these two people to really care about the outcome. I turned to my friend, Charlotte, afterwards and said ‘it was pretty thin’. The suspense never really gets ratcheted up. The story starts following Max as he runs around trying to prove that his wife isn’t a spy when it may have been much better to have just stayed with the two of them as they play cat and mouse. But maybe the powers that be thought that would be boring. 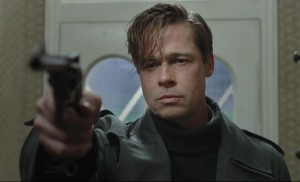 Director Robert Zemeckis is not really known for his love stories. This should have been a love story. They tell you your wife is a German spy for chrissakes! The tension comes from the love and the increasing thought that she’s not who you thought she was. A lost opportunity. 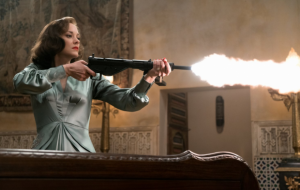 My friend, Charlotte, by the way, loved Marion Cotillard’s wardrobe though. Absolutely stunning!