THE WALKING DEAD S7EP7 SING ME A SONG 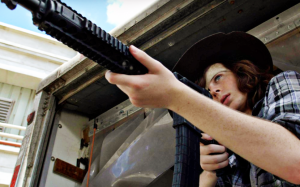 There were a lot of really good moments in this, another, ‘extended’ episode, but there were so many commercials! This probably is actually a normal 60 minute episode with an additional 30 minutes of commercials. 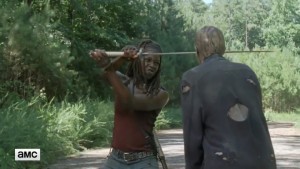 Michonne walks down the road whistling like a Savior but she was really trying to lure unsuspecting walkers her way so she can kill them and make a road block. Later on a female Savior is stopped by the ‘walker barrier’ and Michonne commandeers her and the car. “Take me to Negan”, she commands. After a futile struggle by the Saviorette, she does as Michonne commands and turns the car around. 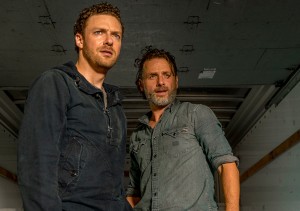 The boys are out looking for ‘stuff’ for Negan and come across a property with a lengthy warning sign. “If you’ve read this far and are still alive then I must be dead” the sign reads. So they venture in and find a house on an island surrounded by a body of water filled with walker-gators. A ‘walker moat’ if you will. They need stuff so they agree to traverse the dangerous pond to retrieve whatever is on that little island. I guess we’ll see how that works out next week.

Rosita gets Eugene to make her some bullets but she had to be pretty cruel to him to get him to agree. Poor Eugene. Spencer and father Gabriel go looking for stuff but the padre could not stand Spencer bad mouthing Rick all the time. He has him stop the car so he could chide him and then gets out and walks back to Alexandria.

Spencer, however, runs across a walker in a tree! He gets him down and finds a note written in Latin. Luckily, he knows Latin and it leads him to be able to scavenge a load of canned food and medicine that he shows off to Rosita and Eugene later.

As the supply truck carrying Jesus and Carl nears the Savior camp Jesus tells Carl they should jump out.  Carl agrees but then does not jump.  He waves by to Jesus as he and the truck makes its way through the gates. Damn if Carl doesn’t come out shooting!  He takes out a couple of Saviors before Dwight overtakes him. Negan loves it!

He takes Carl on a little tour of the place as Daryl looks on with concern.  It seems Daryl has slowly made his way out of his cell but still on a tight leash. 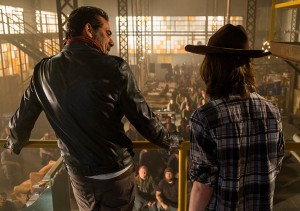 Negan let’s Carl witness how much power he wields as he addresses his ‘subjects’. He turns his back on the crowd below him and turns to Carl, “Are they still kneeling?”

Next, he takes him into the boudoir that is his harem. We see all of Negan’s wives lounging in a salon, dressed very nicely but with looks of fear and dread on their faces. 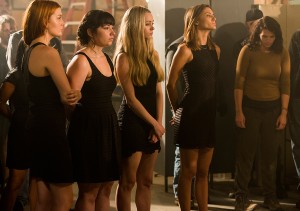 His newest wife, Amber, is crying. It was discovered that she met with her actual husband, Mark in secret. Well, that’s cheating on Negan! And that is not allowed. He tells Amber that she can go back to Mark but that decision would have dire consequences for them and her mother.  Amber says it won’t happen again.  Sherry calls him an asshole.

“I know,” he says, “but the messed-up thing is you like me anyway.” He starts kissing Sherry, pretty passionately, too, when Dwight walks in with Daryl who’s carrying a plate of food.  He tells Dwight to get the iron ready. He has Carl take the tray and he takes him to his room for a little chat to discuss what he’s going to do with him. 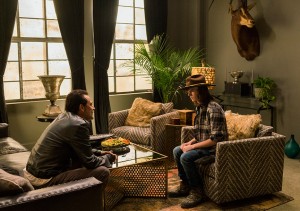 “That is disgusting! Have you seen it? It’s as gross as hell! I wanna touch it.  Can I touch it?”

“I want you to sing me a song” Negan tells Carl. Carl protests but Negan won’t take no for an answer.

Carl sings “You are my sunshine” while Negan violently swings Lucille as if coming down on someone’s skull. Carl’s voice is understandably shaky.

Negan seems to bond a little with Carl. He kids Carl about how his dad should have taught him about ‘breaking each other’s balls’ a step to masculinity in his eyes. When he asks Carl if his mother sang him that song, Carl admits to him that he was the one to shoot her.

“No wonder you’re a serial killer in the making,” he says. 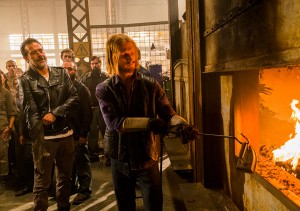 Negan takes Carl down to witness what punishment he has in store for poor Mark. Dwight passes him the hot iron and in front of everyone assembled, he presses the iron to Mark’s face. The poor guy passes out. Daryl looks over at Dwight. I’m sure it brought back memories for him. When Negan pulls the iron away from Mark’s face it rips some skin off! Ouch! 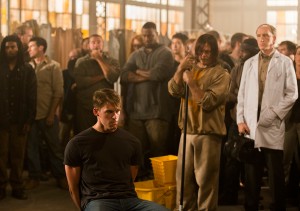 Back in Negan’s room Carl asks why he hasn’t killed him or his dad. Negan gives him a careful answer. Rick is getting him some good ‘stuff! Negan asks Carl what he thinks he should do.  Carl tells him to jump out the window to save him the trouble of killing him. That Carl sure does have gumption! And Negan loves it!  Negan decides to give him a ride home.  Daryl dares say something as they get in the car and Negan tells Dwight to give Daryl a ‘time out’ and put him back in his cell. No one seemed to notice that Jesus was clinging to the top of that truck except Daryl but by the time it took off for Alexandria, Jesus, somehow had gotten down undetected. 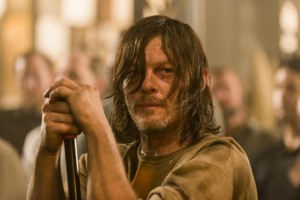 Later in his cell, someone passes a note to Daryl saying ‘Go Now’ with a key taped to it. Was it Jesus? Sherry? Dwight?

Negan walks into Rick’s house with Carl in tow to be greeted by Olivia who tells him that Rick is out scavenging and she doesn’t know when he’ll be back. Negan decides to wait. He even offers to have sex with Olivia, if she would find that ‘enjoyable’. Olivia slaps him hard!  Negan smiles and leans in close to her and says, “I’m 50% more into you now.”  Then he asks Carl to show him around.

We are then entertained by a cute montage showing Negan squishing his toes in the carpet in Carl’s room, marveling at the running water, shooting darts until he finally opens a door to discover a baby!  Judith. Carl looks so worried but Negan is delighted. They relax on the porch, Negan holding Judith as people walk by.

“Hi neighbor! Come by later and we’ll grill!” Negan says to one passerby. “Oh, I like it here. I think I’ll stay.” 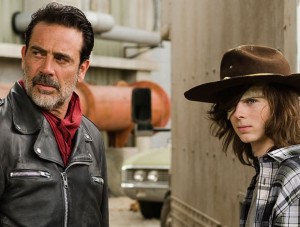 Negan notices that Carl has did dad’s stink eye look but it’s only half as good because he only has one eye. He’s such a card!

Dwight meets Sherry in the stairwell for a smoke and a chat, their usual meeting place.  Reminded me of those scenes in Better Call Saul where Jimmy and Kim meet for a smoke in the parking garage.

Next week is the midseason finale. I am assuming something major goes down. At least we get to see carol and Morgan again!

Who is the next to die?