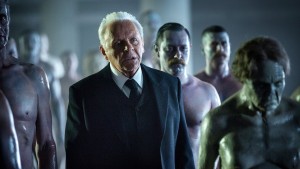 Shades of Dr. Zaius in Planet Of The Apes right before Charlton Heston discovers he’s back on earth.

Maeve, Delores, Teddy, they’re all now experiencing their past lives which are just as vivid as their current ‘life’. While Teddy has just started seeing flashbacks and Delores seems to be being driven mad by them, Maeve has gained a new consciousness and has begun to take control of her life.

The great Michelle Mclaren (Breaking Bad, Game Of Thrones) directed this episode. I hope she gets to do more episodes in Season 2! 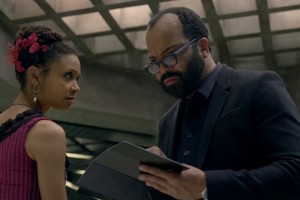 “We’ve been down this road before, haven’t we?” Maeve

After killing New Clem (“a very serious unscripted incident”), Maeve is brought back to the lab to be examined by Bernard. It’s obvious that Maeve is playing dumb for Bernard. He looks at her program and sees all the upgrades and is about to alert Ford when Maeve grabs his arm. “Don’t”.

She remembers him being there when she committed suicide in the lab after Blackie killed her and her daughter. She realizes he is a host like herself but that he doesn’t realize it. She is able to control Bernard with her newly acquired administrative authorities.

“You’re going to clear me for safe return to the park. I have a date with a homicidal bandit and I’m late enough as it is.” Maeve says matter of factly.

Bernard does as she asks, of course, and is about to go on his own way before Maeve tells him one more thing:

“Bernard, if you go looking for the truth, get the whole thing. It’s like a good fuck. Half is worse than none at all.” 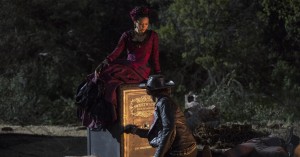 Later on, in the park, we see Hector, Armistice and their gang camped out and still unable to open that safe. Hector goes to take a piss and encounters Maeve. She knows everything about his past loops. She tells him exactly what’s going to happen next; his men will get in a fight and kill each other and then Armistice will kill him. It all happens as she says except she kills Armistice first.

“I want you to break into hell with me and rob the gods blind” Maeve tells him.

Maeve and Hector move into the tent and start having sex. “Getting to hell is easy”, she says as she knocks over a lantern setting the tent and everything in it on fire.

She has now seduced a co-conspirator to assist her in her plan. She intends to break out somehow. 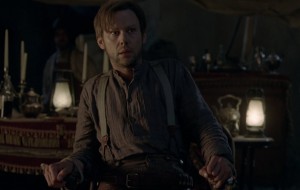 “It’s Delores. She’s not like the others. She remembers things. She has her own thoughts and desires.” William

Logan ties up William thinking he’s gotten lost in this world and needs to be brought back to reality, so to speak. William asks Logan to use his contacts to help get Delores out of there.

“You both keep assuming that I won’t out, whatever that is. If it’s such a wonderful place out there why are you all clamoring to get here? Delores

Logan is impressed with Delores but needs to prove to William that Delores isn’t special and that he has a real woman back home, namely Logan’s sister. He takes a saber and cuts open her belly to expose her circuits. This is a clue. Metal? The modern hosts are much more sophisticated. Delores takes the saber and cuts Logan’s face. She grabs a gun and shoots her way out.

“Run! I’ll find you!” William tells her. As she runs for her life she hears Arnold. 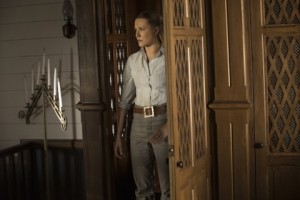 Suddenly, her wound is gone. Her clothes keep changing too. This, to me, signifies we are seeing her in two different timelines. Delores finds herself back in the town they found in the last episode. She goes into the church to find all the hosts glitching, looking crazy. She walks into the confessional and that triggers an elevator that takes her down into the lab. We see a young Dr. Ford and overhear him arguing with Arnold. This is certainly the past now. She moves further in and finds a room where she sits and waits.

Back at the Confederate camp Logan and William seem to make up.
“What happens here stays here!” Logan tells William. This is the new Las Vegas apparently. They party it up and the next morning, Logan awakes to find everyone dead, ripped apart, except himself and William.

“You said this place was a game. Last night I finally figured out how to play it.” William tells Logan. He tells him that they are going to go looking for Delores.

THE MAN IN BLACK 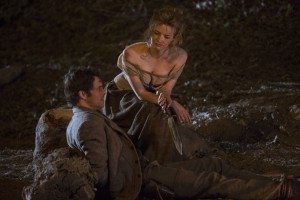 Teddy is still alive! But not for long!
Teddy remembers himself killing all these union soldiers at the behest of that dastardly villain, Wyatt. But Angela doubts his memory. He then remembers killing townspeople, including Angela! He’s now not a soldier but wearing a sheriff’s badge. Could this be the same town that Delores has been seeing?
She tells him he’s not ready, maybe in another life. Angela kills Teddy. She then turns her attention to Blackie.
“A city swallowed by sand. I’ve been there. The Maze has taken me full circle.” Blackie realizes. This is referring to Delores’ town.
“The Maze is not for you. But if you like to play games how about a real one?” Angela says and then knocks him out. He wakes with a noose around his neck and the rope swung over a tree branch and attached to a skittish horse. Blackie manages to save himself just as a surprise visitor arrives on the scene; Charlotte Hale. “Why don’t you try golf?” She asks. 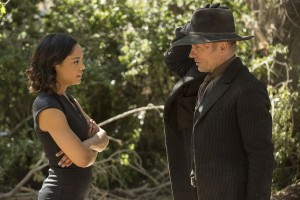 She tells him that Cullen was killed trying to send the data they wanted. She wants the board to oust Ford.
“It was you who kept Ford in business all those years ago.” She tells him.

Blackie doesn’t care. He tells her to do what she wants but to not disturb him again. He knows where he’s going now. 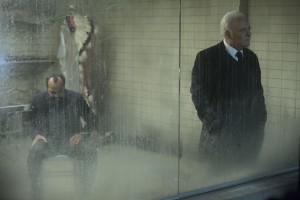 Bernard sneaks into Ford’s office. Then arranges to meet Ford on the 84th floor where all the retired hosts reside.

“I took a look at my code, and the most elegant parts of me weren’t written by you. Arnold built us, didn’t he? Which means, maybe he had something different in mind for us and maybe you killed him for it.” Bernard

He has reprogrammed Old Clementine to only listen to him. They lobotomized her but didn’t change her settings. Bernard can’t kill Ford but Clementine can.

He allows Bernard to see everything in his program. He sees himself kill Elsie.
“I’m going to finish the work that Arnold began. I’m going to find all the sentient hosts and set them free,” Bernard. 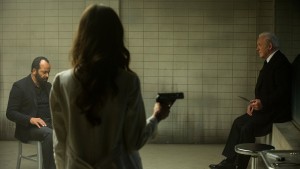 He doesn’t believe Ford when he tells him that he made him, not Arnold. He asks Ford to take him back to his first memory. “If he made me then I met him.”
Ford obliges. We see newly made, naked Bernard hop off the table. But it’s Ford that greets him. “Who am I?” he asks Ford. Then we see that photo again, the one that was on Ford’s desk. We see Bernard is in the photo. When Bernard was a human. When Bernard was Arnold. Ford has recreated he old friend and partner as he had his family. 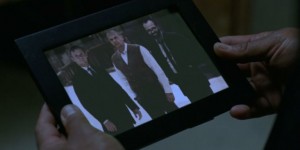 Bernard tells Clementine to kill Ford. But she cannot. Ford has built a backdoor? No, Bernard did, as he has with all the hosts, including himself. Ford then instructs Bernard to take the gun from Clementine and to kill himself once Ford has left the room. “Goodbye, old friend” Ford says. Is Bernard really done? We don’t see him actually do it. We just hear the shot. 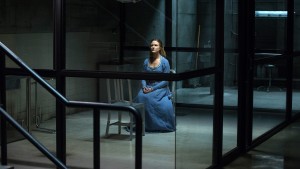 We cut back to Delores, waiting in that room. Arnold/Bernard comes to speak with her. Delores feels lost and asks for help. “Remember? I can’t help you. Why is that Delores?” Arnold says.

She goes back up the elevator and into the church when the church door swings open. She’s terrified. It’s The Man In Black.

Did she really kill Arnold? Physically?  Or cause him to die? Heart attack?

Maeve is fully clothed when she is in the lab speaking with Bernard. It breaks with protocol but she controls all now. 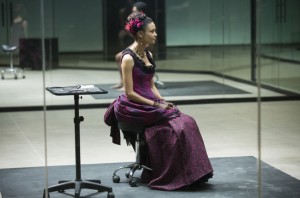 Maeve knows everything now, even the combination of the safe!

Stubbs goes looking for Elsie and gets jumped by members of The Ghost nation. They are not responding to voice commands. Do they kill him? Why not? He hasn’t been much of a head of security.

The picture of Logan’s sister that he shows William is the same photo Abernathy finds in the dirt in episode one. 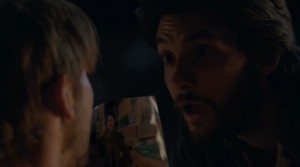 When we see Bernard speaking with his wife, the digital feed blurs and you see it’s actually Ford.

5 THINGS I THINK I KNOW – FOR THE SEASON FINALE 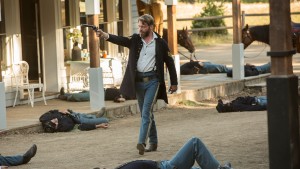 1 It will be confirmed that William and Blackie are one and the same.
2 William will shoot Delores – in the past timeline.
3 Blackie finds Wyatt. It’s Lawrence!
4 Bernard is not dead.
5 Maeve will escape on the train but find that the park is on another planet.

This has been a wonderful ride so far.  This is the closest experience to watching my beloved LOST as I have come to. I’m looking forward to the finale blowing my mind!