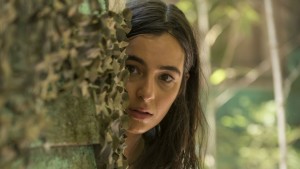 In a little homage to Glenn, Tara quotes him to Heath; “There’s nothing left in this world that isn’t hidden.” 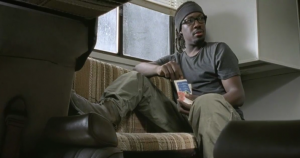 Heath is agitated and still traumatized about what he felt they were forced to do back at the outpost. Tara feels completely justified for their actions. She’s has that Us or Them mentality that Rick tried to instill in all of them. 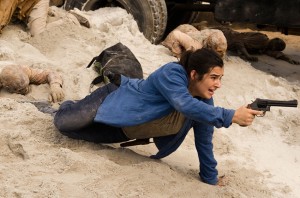 They come across a bridge where it seemed there used to be a small group living on. They soon discover a whole bunch of walkers under a huge pile of sand – “SAND WALKERS!”. Heath and Tara get separated. The episode begins with a woman, Cyndi and a young girl Rachel, find Tara washed up on a beach. The little girl wants to kill her because ‘that’s what were supposed to do.” But Cyndi stops her. Later on Cyndi brings Tara some water and salted raw fish (Yum!). 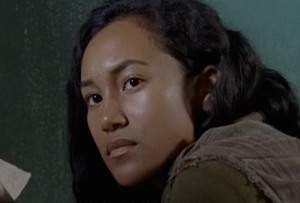 Tara wakes up and follows Cyndi back to her community. There are only women and girls, no men. She spies a healthy stockpile of weapons, though. She is soon discovered and captured. She meets Natania, the matriarch of the community. They do not want to let her go for fear that she will tell of their community and they will be attacked. 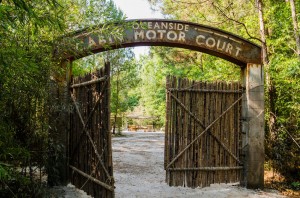 They eventually untie her and invite her to a friendly dinner at Natania’s home. They offer her a home there and even offer to go look for her friend and allow him to stay there. Tara tells them all about how she is part of a strong group and how they took out that Savior outpost. She soon learns that it was The Saviors that killed all their men and made them work for them until they just sneaked away one day and found this spot by the beach. They are scared to death that The Saviors will find them. Tara tells them they should come back with her to Alexandria. Natania agrees to send some scouts with her back to Alexandria and report back before they make that kind of decision. 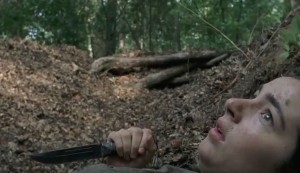 The next day, Tara and two of the women set out but it’s the old double cross! Luckily, Cyndi followed them and helps her get back to the bridge and safely across. She never finds Heath. She does find a curio shop and picks up a cool looking pair of shades!

She arrives back at Alexandria only to be greeted by a blubbering Eugene who tells her all the awful things that happened while she was away. Thankfully, we’re spared the scene and it just cuts to them looking sad.

The episode ends with Rosita and Tara consoling each other and Rosita prying her for info about what she found out there. Did she find any guns? Of course we know she did but she tells Rosita she didn’t. She doesn’t want to betray the all lady beach commune. Noble of her. But you and I both know that she will eventually spill the beans! They will need that cache of guns when they go to war with Negan!

This episode did not need to be 70 minutes long. It felt like filler. But we needed to see those guns! Hopefully the last two episodes before the Winter Break will knock it out of the park!

I doubt we’ll see Heath again or if we do, he’ll be a walker. The actor that plays him, Corey Hawkins, will be the lead in the 24 reboot series, 24:Legacy on Fox. 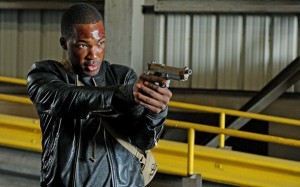 Tara takes a handgun from the outpost massacre and we get a close up of the handle. There’s sweet old Lucille’ carved into it! Those saviors sure are sentimental. 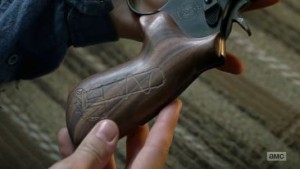