What was amazing about this episode is that the fragments of memories we have been shown in the previous episodes are starting to come together and be explained. There are some amazingly powerful sequences in ‘Trace Decay’. The performances are all Emmy worthy. Let me try to make some sense of it all. 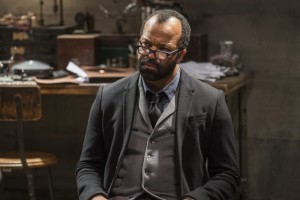 “Bring yourself back online, Bernard” Ford

Bernard is completely freaking out about killing Theresa.

“You killed her because I told you to.” Ford simply tells him.

“I will not help you! I will raze this place to the ground!”

But he is a host. Ford simply tells him to calm down and so he does. He tells him to clean up his mess and when he is done, “I will free you from the memories of what you have done and of your relationship with Theresa. When you look back you will remember Theresa with the affection of a respected colleague.”

The whole scene is so creepy. Bernard is a host who was in charge of programming other hosts. Those scenes with Delores were conversations between two beings that are lost and longing for connection, looking for meaning.

Bernard proceeds to make it look like Cullen was trying to steal secrets from the company and transmit them when she falls to her death in the same ravine where the stray was found in episode three. Stubbs shows Ford and Hale her bruised body. Ford now takes the high ground and claims Cullen was responsible for the erratic behavior of the hosts. He gets her to agree to reinstate Bernard to help him keep the park going until they find a replacement for Cullen. Hale goes along but she knows something’s wrong. 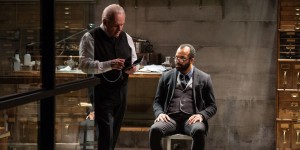 Ford prepares to erase his memory but they have a conversation first.
“What is the difference between my pain and yours? That differentiates you from me? Bernard asks.

“There is no threshold, no inflection point … we live in loops as tight and closed as the hosts do. You’re not missing anything at all.” Ford tells him.

“Have you ever made me hurt anyone before? Bernard asks.
“No, never, Bernard.” Ford says. 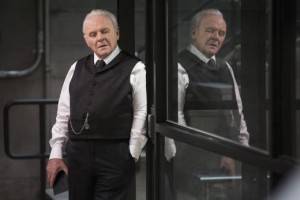 Then, right before Ford erases Bernard’s memory he remembers strangling Elsie. He is startled by the memory but then goes blank.

Later on, Stubbs runs into him and welcomes him back to the job and apologizes for disturbing him. Stubbs, being head of security, was well aware of his relationship with Cullen.

“You have the wrong idea. I respected Theresa very much but I hardly knew her.” Bernard tells him, echoing what Ford had told him he would program him to feel. This raises all kinds of flags for Stubbs who knows otherwise. 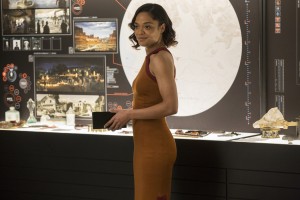 Sizemore is in the middle of programming a human leg eating host he believes will be the new ‘Wyatt’ when Hale strolls along and tells him to forget about all that. Ford is just giving him busy work while he does all the real work on the new narrative. She tells him she has a special project she wants him to work on.

Sizemore and Hale go to the floor where hosts have been retired.
“Even the dead fulfill a purpose” Hale says.
They find the original Abernathy. “He’ll do. ” Hale says.
She starts uploading data into him and asks Sizemore to give him a semblance of personality, get him on the train and out of the park.

I think hale suspects Ford will try to shut out the Board for good and she is trying to sneak out the technology for their own use, perhaps fro some other nefarious purpose. 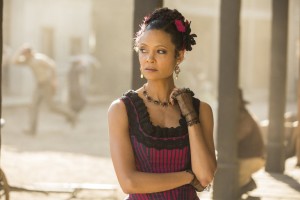 Back at The Mariposa, Maeve meets the new blonde Clementine. She is not impressed and soon she is back in Repair. She tells Sylvester and Felix to set it up so that she can control other hosts. Sylvester is livid but Felix is like hypnotized by her.

“The things I need you touching are quite sophisticated but I can write them down for you” , Maeve tells them.

She describes the confusion happening in her thoughts. “It’s complex like two minds arguing with each other.” She tells them.

Sylvester tries to convince Felix to just erase her memory and end this or they are going to be in mucho trouble. “Look, I know you and she had some weird inner species simpatico going on but she’s a fucking host!” he tells Felix.

Once they have Maeve on the table she turns to Sylvester.

“Sylvester. Good luck.” , which sounds threatening. Of course, Felix can’t go through with it.  He told Maeve the plan and Maeve jumps off the table scaring the hell out of Sylvester.

“We’ve been tinkering with my core code. Let me show you”  Maeve says then grabs a scalpel and slices Sylvester’s throat. Holy Crap! It was just a warning, though and instructs Felix to cauterize the wound. Vicious! 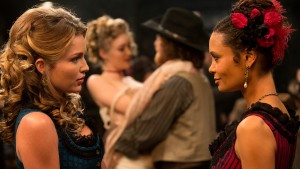 She tries out her new powers back in Sweetwater. She simply tells a host what to do and they do it. When Hector and Armistice ride into town to steal the safe, Maeve makes sure they get away unscathed. Experiment successful! 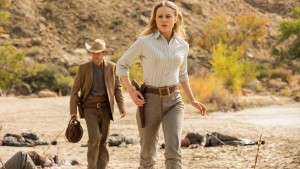 “Where are we? When are we?  Delores

Delores and William come to a town – the place with the church steeple we see in the future, where Ford wants to stage his new narrative. We see this from Delores’ point of view. She believes she is home. The first clue something is wrong is that she’s back in that blue dress. She strolls through the town and she see lab techs are training hosts. Maeve is there learning to dance along with a group of other hosts. There is Lawrence’s daughter!

“Did you find what you were looking for Delores?” She asks.

Then Delores sees everyone get shot dead. She sees herself holding a gun to her head. Suddenly William stops her as she is now holding a gun to her own head. She’s back in her new attire.  She looks again at the town and it keeps changing as if she’s seeing both the present and the past at the same time.

Where are we? When are we? Is this now? Am I going mad?  Are you real?  I can’t tell anymore. It’s like I’m trapped in a dream or memory from a life long ago.”

William has no idea what’s happening but figures it’s because they traveled so far away from Sweetwater. They keep moving and eventually run into a  group of Confederates led by our old friend, Logan!

“Billy I’ve been looking for you for days.  Man, are you two fucked”  Logan

THE MAN IN BLACK 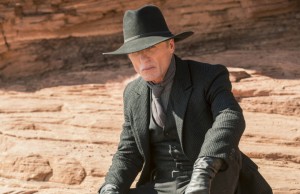 “I wanted to see if I had it in me to do something truly evil, to see what I was truly made of.” The Man In Black

As Teddy and Blackie ride on Teddy starts having flashbacks to Blackie attacking him and Delores in the first episode. Then they come across some murdered settlers. One blonde woman is still alive.

“It’s you! I figured they retired you.  I guess Ford doesn’t like to waste a pretty face”  Blackie says to the woman. He recognizes her. I did, too. It’s Angela, the host that welcomed him when arrived at Westworld for the first time. Or I should say, welcomed William.

“You can’t remember shit but you managed to lead us to Wyatt’s crew. The man must be near.” Blackie says.
“Actually I did remember something. You.” Teddy knocks him out and ties him up.

That night, Blackie confides to Teddy who he is, a titan of industry in the outside world. His wife recently died. His daughter told him that she committed suicide and that she blamed him. They’d never seen the man he was when he was in the park but they sensed it anyway. The departed things he did while in the park changed him. How could it not. he decided to come back and conduct an experiment. He would do something horrible just to just if he felt anything. 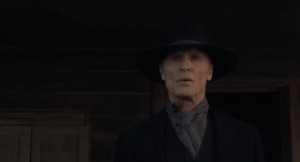 “An animal would have felt something.  I felt nothing. Then something miraculous happened.  in all my years coming here i’d never seen anything like it.  she was alive, truly alive if only for a moment.  and that was when the maze revealed itself to me.” She and her daughter fall dead on a patch of ground where the maze was inscribed.

Angela yells at Teddy to kill him but he can’t. He’s not allowed. But there’s nothing preventing Angela from killing Teddy. Black looks shocked. The she summons a ton of crazy followers of Wyatt who come creeping out of nowhere.

Coinciding with Blackie’s tale told to Teddy, we see Maeve planning her getaway but problems arise when she starts flashbacking to her and her daughter on the plains and being killed by Blackie. She was unable to kill Blackie but as she relives the memory she ends up slicing new Clem’s throat.  The sheriff comes after her but she causes a diversion.

Security becomes aware that she has gone loco and sends a team to retrieve her and bring her back to the lab.

We then see Maeve in repair still mourning the death of her daughter. She is not responding to voice commands. Ford then does something on his iPad, “You need not suffer, Maeve.  I’ll take it from you.
She calms down but is still present in the now.
“No please, this pain is all I have left of her.  Please”

Ford eases her memory. A fresh start.  A new role for you and tomorrow this will just be a distant dream.  But that still doesn’t work.  She suddenly awakens and stabs herself in the throat.

Damn! What the hell!!!!! How did they trust her enough to put her back in play as the mistress of The Mariposa? 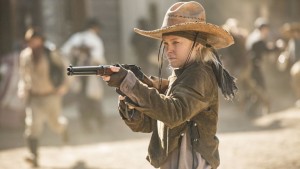 Maeve downs that double shot like nothing.  Can hosts get drunk?

“Mayhem”  Hector responds then shoots him!

The player piano plays ‘House Of The Rising Sun”

Why is Delores always seeing herself? In the carnival parade in Pariah, face down in the river. Is it just a symptom of her losing her mind?

“If there was a shortcut to hell I’d take it.” Teddy

“I’m sure there is one somewhere in this place.” Black

I like how Sylvester and Felix walk outside and argue as Maeve observes from inside. Reminds me of 2001 when HAL observes the two astronauts talking about him and reading their lips. 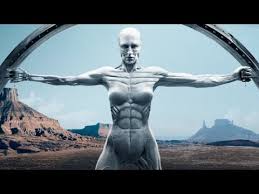 1 Teddy will end up back in repair and will hook up with Maeve for the rebellion.

3 Ford is a sociopath…or is he also synthetic?

4 We are seeing Delores with William in the past but where is she in the present?
Still in her loop?

5 Stubbs will discover that Bernard is a host.