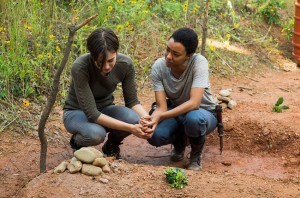 “My name is Maggie Rhee!” Maggie

This week we travel to The Hilltop to check up on Maggie and Sasha. Some people don’t like these stand alone episodes where they concentrate on specific characters and places but this is how the show has operated since Season Four. Especially with so many characters and an expanding world, it makes more sense. But before we travel to The Hilltop we check in on the ‘Grimes Family”

Rick and Aaron are about to head out to find ‘stuff’ for Negan. Rick wants Carl to come with but he’s too busy playing darts. His aim is for crap! I guess losing that eye has hindered his depth perception. I don’t think he hits the board once! Rick wants Michonne to come with, too but she decides to stay behind. He moves in to kiss her goodbye on the cheek but she stops him, grabs his face and they engage in a passionate, tender lip lock. Remember when you were a man, Rick! She’s trying to reassure him that she’s still with him but she’s struggling with it. 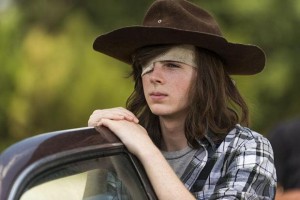 Ah, young love! It’s no different in a zombie apocalypse. Carl catches Enid jumping the wall. She wants to go to The Hilltop to be with Maggie. Carl thinks she’s crazy! (That’s just the love talking) He tells her “I’m not saving you anymore”. Enid can take care of herself just fine, thank you! 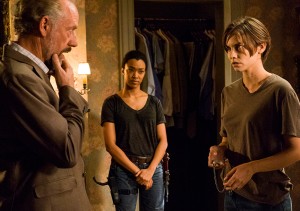 Maggie wakes up. She looks better. There are some nice blue flowers in a vase by her bedside. The doctor tells her she’s fine, the baby’s fine and that she should remain at The Hilltop in case of further complications.

She asks Sasha to take her tow where she buried Abraham and Glen. The scene at the graveside when she takes her father’s watch and places it on Glenn’s grave was so sad!
“Abraham only had a cigar in his pocket”, Sasha says.
Jesus comes along with green flowers to lie on the graves. Green represents release. He also left the blue flowers which were meant to inspire strength and calming. But when Gregory shows up he is anything but calm. 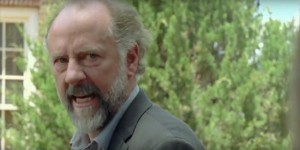 He is mad because Rick promised they would take care of The Saviors but they failed and now more heat is coming down on them. He wants Maggie and Sasha gone! Jesus tries to intercede on their behalf but he can only get Gregory to allow them to stay one night. 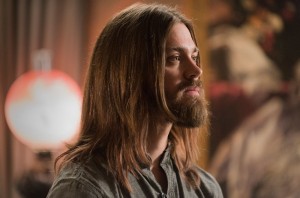 Sasha tries to push Jesus to do more but Jesus can only muster “I’m not a leader!” Funny thing to hear coming out of someone calling themselves Jesus. In the middle of the night they hear music blaring. They see that it’s coming out of Gremlin! The front gates are open, some fires have been started and a horde of walkers are streaming in! Maggie takes charge and starts yelling out instructions. Gregory just observes from his window. “If only he could reach them!” he must have been thinking. Yeah. Right! Jesus goes into kung fu mode! Sasha takes out one walker after another but she can’t open that damn Gremlin to shut off the music. No problem. Here comes farm girl Maggie driving a huge tractor and just plows over a bunch of walkers and flattens the Gremlin! Disaster averted. Those darn Saviors love causing mayhem. 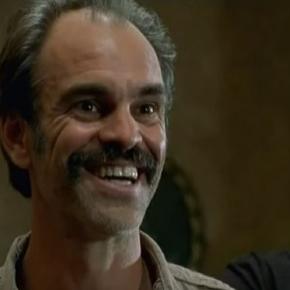 The next morning The Saviors show up led by Negan’s right hand man, Simon. They’ve come for ‘stuff’! Gregory is hilarious! He’s so spineless and squirrelly! He’s played wonderfully by Xander Berkeley. Gregory tells Jesus to hide Sasha and Maggie in the closet. I’d be worried about Negan finding out that Maggie is alive. He obviously took a fancy to her plus he’d be pissed at Rick for lying to him. 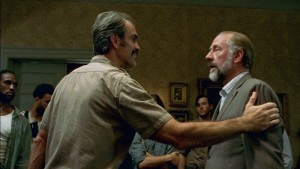 Simon and Gregory have a tense, play friendly conversation and Gregory is unnerved enough that he is prepared to turn over Maggie and Sasha. But when he goes to the closet they’re not there! But his case of Scotch is there and Simon says ‘thank you’ and takes it for Negan. Once The Saviors are safely away Gregory finds that Jesus hid them in a different closet, one in Gregory’s bedroom. Gregory is furious! And that’s when Maggie punches him right in the jaw! Then she reaches into Gregory’s pocket to find Glenn’s watch! Oh, that dirty bastard!
“You’re going to have to start using my name. Not Marsha, not Dear, not Honey. Maggie. Maggie Rhee.” Maggie tells him. Damn! She is going to take over this place! 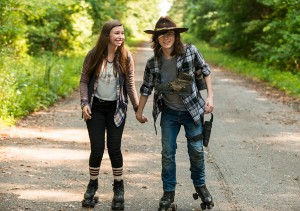 Meanwhile Enid gets into some trouble on the road and who should come to her rescue? Carl! Driving (badly) and running over some meddlesome walkers. They journey together to The Hilltop and along the way Carl finds a bag containing two pair of roller skates! Couples Skate through Zombieland! So sweet! They arrive at Hilltop in time to see The saviors loading up their trucks. They share their first kiss! Awful cute! But then Carl goes and blows it! He wants to kill Negan so badly he is willing to go it alone! Enid begs him not to go but he’s a stupid little punk! Kid! Stay with Enid! Cuddle in a tree somewhere and smooch!

Enid finds her way to Maggie and Sasha. Maggie gives her the watch. She’s family now. But she should have saved it to give her baby, right? Sasha and Maggie ask Jesus to do them a solid and find out where Negan lives so Jesus puts on his traveling gear and hops into the back of one of The Savior’s trucks as it takes off and lo and behold! Who had the same idea? The dork Carl! Jesus looks amused by this quite frankly. Who knows what trouble these two are going to get into!

Gregory and Jesus were on Talking Dead after the episode and it was insinuated that Jesus may be Gregory’s son. Interesting. Explains why Jesus would defer to him and defend him. 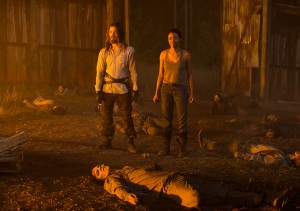 The music playing from that hideous Gremlin was Sibelius’ “Finlandia. Just so you know.

What does Carl think? He’s going to sneak into Negan’s house, kill him and get out alive? Does he accept that it’s a suicide mission? He’s going to get caught and Negan is going to make Rick do something god awful to get him back. Dammit, Carl!