Phillip K. Dick pondered this question in his 1968 novel which later was adapted for the big screen as Blade Runner. Westworld has been asking similar questions about what synthetic life forms may be thinking, feeling, dreaming and how could that even be possible? This weeks’ episode delivers a startling revelation. One that I predicted by the way! Take that Milo! 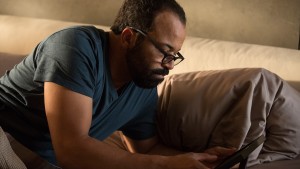 “The longer I work here, the more I think I understand the hosts. It’s the human beings that confuse me.” Bernard

Bernie has a dream of reading Alice’s Adventures in Wonderland to his sick son in the hospital. His son then passes out, seemingly dies and Bernie wakes up in a sweat. He looks at a picture of his wife and son and himself that’s on his bedside. Poor Bernie.

He has a session with hector in the lab and shows him photos of the real world and asks him what he sees.

“They don’t look like anything to me” he answers.

Bernie inquires if anyone has heard from Elsie. He looks at his tablet and scans the park for her but nothing. She’s just gone. 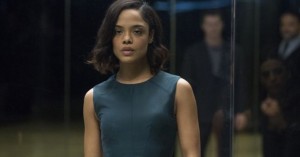 “But the gods. They require a blood sacrifice. We need to demonstrate just how dangerous Ford’s creations can be.” Charlotte Hale

Cullen goes to Hale’s room and is greeted by a completely naked hale and a tied up Hector in the bed. I would think this would be happening more often.
“Why don’t you have your friend join us” Hector says before Hale finds the controls and turns him off. 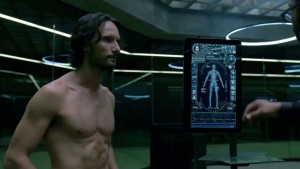 Hale tells Cullen that board is not happy about Ford and his new narrative. They won’t fire him but want to try and force him to retire. They plan a little demonstration for Ford and Bernie. They use Clementine and another host to demonstrate how dangerous a host can become after these new ‘reveries’ were programmed. Clementine becomes violent and won’t respond to voice commands. Stubbs has to shoot her. Ford looks uncomfortable for the first time. Hale places the blame on Bernie for not reacting quicker to the problem and fires him. 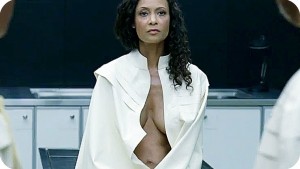 “You think I’m scared of death? I’ve done it a million times. I’m fucking great at it.” Maeve

Maeve is back in ‘Madame’ mode at the Mariposa Saloon but she is not the same old host. When Clementine comes over after being with a guest, Maeve can’t help but look at her with pity as she describes where she comes from and her family.
“I’m going to get my family out of the desert. We’re going to go somewhere…cold. Someday” Clementine tells Maeve.
But Maeve knows, as Delores realized with Teddy, a few episodes back, someday means never. 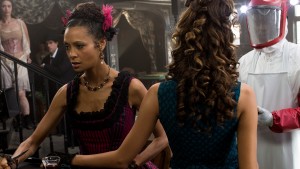 When some techs in hazmat suits walk into the bar talking about grabbing the girl at the bar, Maeve instinctively grabs a knife. Self preservation level has been raised. But they are after Clementine, not her.

Maeve ends up back in repair again, presumably by her own hand. Felix warns her that she’s back too often and someone is going to suspect something. But Maeve has come looking for Clementine. Felix walks her over to where Sylvester is performing a lobotomy on Clem – essentially ‘retiring’ her from operation. Maeve looks heartbroken.

Later on, Maeve has Felix and Sylvester in front of her and she is about to have them help her with a special project. I assume this will mean adjusting the levels on some other selected hosts.

It must be horrible to be aware of everything and still have to pretend to play along. Clem was her friend. The hosts seem capable of more empathy than the humans. This was also the premise for Blade Runner. 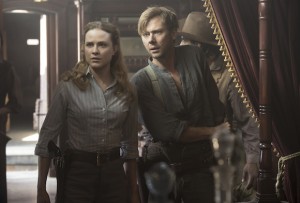 “This place you’re looking for; what makes you so sure it exists? William
“I’m not.” Delores

Meanwhile the train carrying William and Delores keeps rolling. William and Lawrence are very friendly and playful playing poker while Delores frets. Lawrence reminds them that they were the ones that wanted to come with him on this journey.
“My friend wanted, I guess he wanted to see what was behind all of this?” William says of Logan.
“Maybe you have more of an appetite for this than you think” Lawrence tells him.

Delores and William spend some time getting to know each other better.
“The only things I had when I was kid were books. I used to live in them. They had meaning. This place is like I woke up in one of those stories. I guess I want to find out what it means.” William

They are obviously falling for each other but William stops himself and tells her how he is engaged to Logan’s sister and that’s who he plans on returning to. Delores is visibly shaken and leaves the room. William can’t help himself and follows her. They fall into a passionate kiss that leads to the bed and we assume much more. The show is very discreet with their relationship. For now. 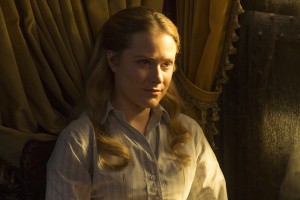 The next morning William awakes to see Delores painting – A lovely landscape with a river. She doesn’t know what or where it is but it’s in her thoughts. William tries to describe what he feels about this world.

“I used to think this place was all about pandering to your baser instincts. Now I understand. It doesn’t cater to your lower self, it reveals your deepest self; it shows you who you really are.” William tells Delores, “You’ve unlocked something in me.”
“I’m not a key, William. I’m just me.” Delores

Suddenly there’s an explosion. The train is being assaulted by the Confederate soldiers. But before they do any further damage a white flag is waived and a single rider comes out of one of the boxcars. As it reaches the soldiers we see that it’s that corpse that Lawrence filled with nitro. Lawrence fires his rifle and the corpse explodes giving our heroes cover to escape the train on horseback. Delores falls off her horse but William rides back and scoops her up! A rollicking adventure! Chivalry! Love! Excitement! He’s getting his money’s worth!

Once they get clear they come across a river just like the one that Delores was painting. This is where they part ways with Lawrence.

“What’s out that way?” William asks.
“You’re going to have to ask the dust. Ain’t nothing ever come back from there.” Lawrence tells him and rides off.

To where? Where is there beyond this point for Lawrence? 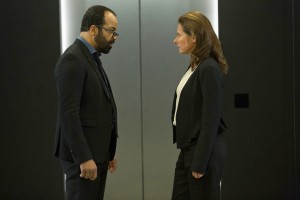 He takes her to Sector 17 where Ford has his little cottage and his synthetic family resides. They enter the house.

“Where does this door lead? Cullen asks.
“What door?” Bernie says.

They go through the door and down into a modern make shift lab where a machine is creating a host. It’s not as sophisticated as the ones back in the lab and it will take longer to create a host but that is exactly what it is doing.
Cullen looks through the papers lying around and sees various drawings of specs of different hosts. She sees one for Delores. But then she sees one that doesn’t look right. 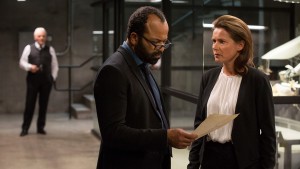 “Bernard, have you seen these?”

Bernard comes over to her and she shows him the one in her hand. It’s a drawing of a host that looks like Bernard!
“This doesn’t look like anything to me” Bernie tells her.

Yup! Bernard is a robot!

Then out of nowhere Ford appears.

“They can’t see the things that will hurt them.” Ford
“You’re a fucking monster” Cullen tells him.

“I’m not one. I can’t be. My wife, my son. They’re real. My poor boy.”
“That’s enough Bernard. Mustn’t get worked up.” Ford soothes him.  And with that Bernie just starts doing the mannequin challenge.

“Do you really think the board will stand for this?” Cullen asks

“The board will do nothing. Our arrangement is too valuable to them. They test me every now and then. I think they enjoy the sport of it. This time they sent you. Sadly, in order to restore things, the situation requires a blood sacrifice.” Ford tells her.

He then triggers Bernie to attack her and kill her.

When Maeve walks into the saloon the player piano is actually playing the Westworld theme song. Maeve shuts it off. 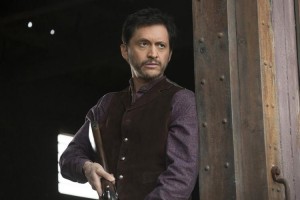 Lawrence blowing up the guy filled with nitro! Gnarly!

How long has Bernie worked there? Does he age? 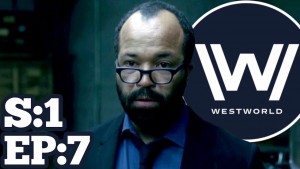 Well! I pegged that Bernie was a robot back in my Episode 4 recap! Vindication! (or lucky guess?)

1 Ford will create a host that looks like Theresa Cullen

2 Bernie is the host version of Arnold

4 William is The Man In Black. I’m pretty sure about this now.

5 William and Delores will find themselves back in Sweetwater – Going in circles.