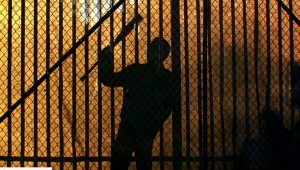 This was a tough week for the country. This episode didn’t make it any easier. I kept thinking this season is a metaphor for what’s happening now. A terrible person has taken over our world and we all feel awful and scared. But we also know that the day will come when we’ll turn it around! I have faith that Rick will get his mojo back and grow back a pair of what Negan took from him. But until then……..”Little piggy, little piggy! LET… ME… IN!!”

Michonne sneaks out of bed and out of the house, taking with her a rifle she had hidden in the fireplace. Rick sees her leave though. She heads out to a clearing and starts using a zombie for target practice. She’s trying to learn to be a marksmen but with terrible results. She ends up slicing the zombie’s head in half with her katana.

One of her stray shots killed a deer though! Too bad that once she hauls it back to Alexandria Negan will take it to feed his men instead. 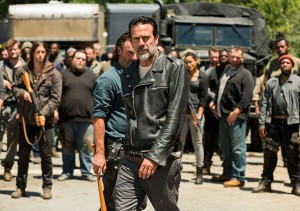 Negan arrives earlier than expected and brings a slew of men and trucks with him and a surprise guest: Daryl. The looks between Rick and Daryl are heartbreaking.

“We’ve separated half our supplies for you” Rick begins.
“No, Rick. You don’t get to choose. I do.”

He hands Rick Lucille to hold for him and then sets his crew loose and they start looking into every house for stuff to take. Making Rick hold Lucille the entire time he’s at Alexandria is such a mind game! He knows Rick wouldn’t dare turn it on him. He is just showing him and everyone that he owns Rick. 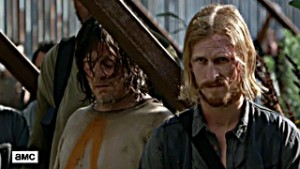 Then Carl decides to cause trouble. He shoots at one of Negan’s men! They rush to the house and Carl complains that they were going to take all of their medicine.
“You better go before you realize how dangerous we all are.” Carl tells Negan.

Damn! He’s showing more guts than his pa! Negan likes Carl’s spirit but he makes it clear to him that his will not put up with it. Carl has seen what Negan is capable of and smartly hands his gun to Rick. But Negan immediately grabs it. This little incident reminds him that there are far too many guns in Alexandria so he decides that they are going to take ALL of them. Way to go, Carl.

Rick shows them the armory where Olivia keeps track of all the weapons. Negan then tells Rick that he won’t take any of their food because he sees they have very little.
“What do you want me to say?” Rick asks.
“How about thank you”, Negan tells him.
When Negan is told that two handguns are missing he threatens to kill Olivia if they don’t find them. 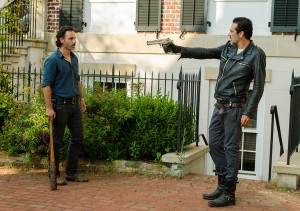 Rick holds a town hall meeting to tell everyone that he is no longer in charge. Negan is. And whoever took those guns needs to return them. Suffice it to say, these people are not very happy. They trusted Rick and went along with every plan he came up with and now look where they are!

Rick finds the guns in Spencer’s house along with hidden food and booze. He gives them to Negan. When Rick sees Michonne sneak back to town he asks Negan for permission to be excused for a minute while he goes to speak to Michonne. He gets her to give up the rifle and he gives it to Negan. Negan is impressed! It shows loyalty and that he ‘understands the room’. But he still needs to hear two words from Rick.
“Thank you”, Rick vomits out. Negan smiles and moves in close to Rick.
“In case you didn’t catch it, I just slipped my dick down your throat and you said thank you.” Ooof. He leaves Rick nothing. 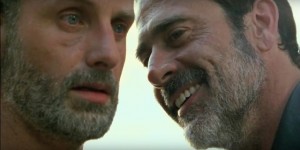 Negan and his crew ransack the place, taking not only all of the weapons but furniture and most of their mattresses. They load up and drive off and when they come back Alexandria better have something interesting to give them or else someone is going to die. Bleak. 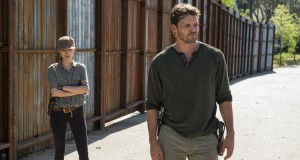 Dwight singles out Rosita and tasks her and Spencer with bringing him Daryl’s bike. He let’s them drive off for it but not before taking all of their guns and even the hat off of Rosita’s head. They drive off and get the bike. Spencer bellyaches about how this is their life now and that this is what following Rick got them. While he was droning on Rosita wandered off into the woods. She finds a group of zombies and takes them all out including one of the Saviors who was zombiefied. He was carrying a gun and she takes it but no bullets. 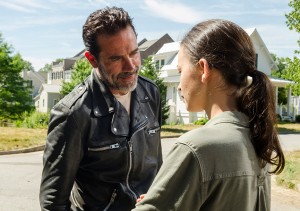 When they get back to town and Rosita finds out that Spencer had been hiding guns she was furious. But I have a feeling they will make an alliance and plan something stupid.

At the end of the episode she knocks on Eugene’s door and ask him to make her some bullets. What is she planning? 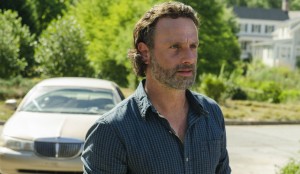 Michonne does not like this broken Rick. My friend Erin said ‘she’s going to fall out of love with him’ and that might happen but it may be her support that will get him back to the crazy Rick we all know and love and that she loves. She wants to fight. A lot of them do. Rick is still traumatized about losing Glenn and Abraham and feels responsible for their deaths. He cannot let anyone else die.

He tells her about Shane and how Shane took care of Lori and Carl when the zombie apocalypse started. They thought he was dead and so they got involved. He understood that. But then he admitted that Judith is not his and that he accepted that. But now he is her father and he wants her to grow up so that he can teach her how to protect herself. He asks Michonne to accept that this is how their lives are now. She reluctantly says she will try as they lay out their sleeping bag and sheets.

The next morning, Michonne goes back out to that open field to stand watch when she notices something. She finds that all the mattresses Negan took were lying in a pile and burned. 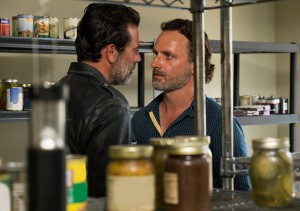 I love Negan’s reaction when he sees Father Gabriel. “Holy crap! You are creepy as shit sneaking up on me like that wearing that collar with that freaky smile!!

My friend Charlotte complained about Dwight taking Rosita’s hat. “Why would he take her hat? That doesn’t make sense!” I told her he was just pointing out that they can take anything they want. He gave it back!

Father Gabriel came up with the smart idea of digging a grave for Maggie so that Negan will not want to take her which is exactly what he was thinking of doing. But what if he discovers she’s alive and well and at The Hilltop? There’ll be hell to pay! 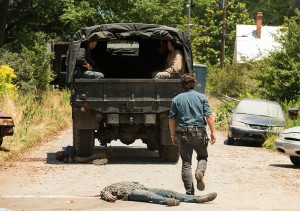 Rick asks if Daryl can stay but Negan says no. He does give Daryl the chance to make his case to stay but Daryl doesn’t take it. That’s smart. He knows Negan is taking him with him anyway. Why grovel unnecessarily?

One of Negan’s men takes Enid’s balloons! The green balloons that she and Glenn used to let everyone know he was alive way back when we thought he died the first time! He makes her say please a few times strokes her face before dropping the balloons on the ground. Oh, Carl did not like that.

Next week it looks like we travel to The Hilltop to check on Maggie, Sasha and Jesus. I’m thinking Maggie loses the baby. How can she fight Negan with a baby in tow!