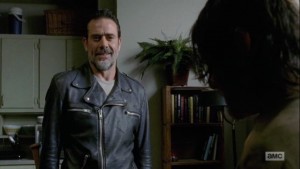 “Who are you?” Negan

You don’t usually see an episode of this show open with a montage to a jaunty little tune but this is a new Walking Dead. Much like the episode of Mr. Robot last season that started with Elliot trapped in a family sitcom, we see Dwight, watching an episode of ‘Who’s The Boss’ and going about his day proving that He is the boss by taking everything he needs to make a delicious looking fried egg sandwich! He doesn’t put as much effort in the sandwich he makes for poor Daryl, however. He just opened a can of dog food, plopped a spoon full between two pieces of bread and hands it to a naked, shivering Daryl in his cell. Daryl eats it up dutifully. And then the music is turned on. “We’re on Easy Street and it feels so sweet!” That would drive anyone crazy! 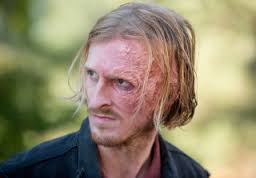 Dwight may be ‘the Boss’ to some but when Negan walks by Dwight must kneel and bow his head. Holy crap! It’s like that? This episode is as much or more about Dwight than it is about Daryl. We get to see a little what life is like in Negan’s camp and Dwight’s place in this world.

When we first met Dwight in S6EP6 ‘Always Accountable” he was trying to escape from Negan and The Saviors with his wife Sherry and her sister, Tina. Tina was killed and Dwight and Sherry stole Daryl’s bike and crossbow and decided to go back to Negan. We now learned the price they paid for this. 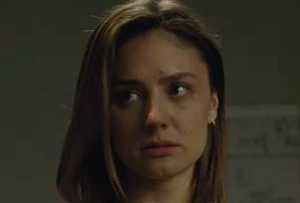 Tina was to become Negan’s wife. Sherry offered herself in Tina’s place in exchange for Dwight’s life. Negan accepted but burned Dwight’s face as punishment and made Dwight work for points. He has become one of Negan’s best workers. But he does not look happy. He can barely conceal his hatred of Negan. And Negan knows it.  He messes with him. He offered him a shot at sleeping with his former wife as reward for doing such a great job at breaking Daryl! How cold is that?

“Are you cool, Dwight?  I just offered you a free seat at the pussy bar and you don’t want to eat? Is that cool?”  Negan digs at him. 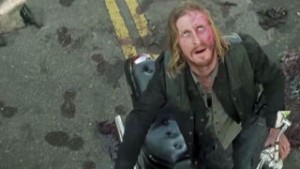 Instead Dwight volunteers to go after an escapee (Orange Alert!). It happens to be a friend of his. Dwight first has to dodge flying walkers falling from a highway overpass but he catches the guy and starts marching him back to meet Negan’s justice. The man pleads with Dwight to just kill him because he knows what is coming will be worse than death. They have an interesting discussion and you see a glimpse of how Negan came to power. 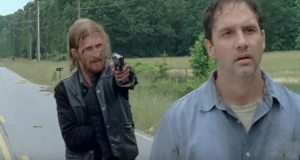 “We were losing, now we’re not,” Dwight answers.

Negan promised them protection and they’ve been safe from zombies but not from him. Dwight must bring him back but he shows some humanity by shooting his captor. 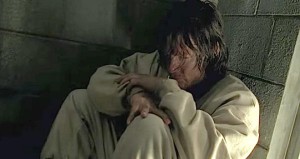 Meanwhile Daryl is in his cell being fed dog food sandwiches and being forced to listen to “East Street” day and night.  While Dwight is away trying to capture his friend, Daryl tries to make a run for it. He is discovered by Sherry who urges him to go back to his cell and if he gets caught it will only be worse for him.  Daryl doesn’t listen and soon finds himself surrounded by a group of ‘Negans” as well as Negan himself.  When he ask each of his mean “Who are you?”, they all respond “Negan”.  This is what he wants to hear Daryl say. He likes Daryl but nevertheless, his mean give him a beating.  Better that than a beating by Lucille.

“You got your friend killed, just like I got Tina killed.” Dwight tells him.  He then tapes a poloroid of Glenn’s body and smashed head on the wall, shuts the door and starts playing ‘Cryin’ by Roy Orbison.  That’s it!  Daryl breaks down crying. That was hard to watch. 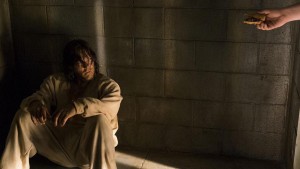 Dwight brings him to Negan thinking he’s finally broken but when Negan asks him “Who are you?”, Daryl answers, “Daryl”.  Dwight throws him back in the cell. Dwight wanders outside and looks at the zombie moat called ‘The Wall” and there’s a new recuit being led out there.  They take the bucket off his head and it’s his old friend, the one he mercy killed out on the road. But he didn’t shoot him in the head.  He had to bring him back one way or another. Because everyone must serve Negan in one way or another.

Dwight brings Daryl to see the doctor and runs into his ex Sherry getting the results of her pregnancy test. Awkward.  It was negative.

It’s obvious Dwight detests Negan but feels he has no way out. Sherry also does not like it there.  Maybe there are more that feel this way.  Maybe there will an opening to recruit these people to Rick’s side when the time comes. 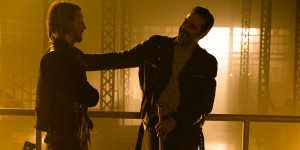 A strong episode. Some people don’t like that TWD chooses to do these character episodes that concentrate on one or two characters without showing what’s happening with everyone else but I like them.

I’ll leave you with the show that Dwight was watching at the open of the episode. A kinder, gentler ‘boss’.