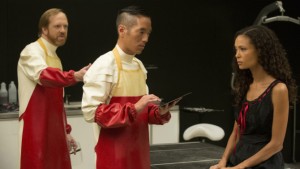 My friend Milo told me after last week’s recap that I might be in over my head. He may be right but I’m going to stay on top of this bucking bronco of a show! Each episode peels off another layer of the onion and brings us one step closer to discovery. The same is true for the characters in the show, guests and hosts alike. Last week we followed Delores on her journey of self discovery; this week, Maeve makes some startling discoveries of her own as well as unlikely but resourceful allies.

“Nobody makes me do something I don’t want to, sweetheart”  Maeve

Maeve wakes up. Walks down the street. A gunfight happens behind her. Another day of work at the saloon. Maeve takes a guest to her room. She taunts him. Insults his manhood. He gets rough with her. He chokes her to death. Obviously what she wanted so she could get back in the lab with Felix.

“Now, where were we?” she says to Felix, the young lab tech.

Felix explains how she has been programmed right down to her vocabulary. He hands her his tablet and as she speaks she sees the words come up on the screen. She short circuits like a robot in the old Star trek show when Kirk confuses it. “Does Not Compute!” Felix feverishly works his tablet and gets her back online. She wants him to take her upstairs to see the rest of the facility. She has him wrapped around her finger which is exactly what she’s been programmed to be able to do. He shows her how they make the sausage, so to speak. Each level they ascend she is shown every aspect of the operation: She sees where they repair the injured hosts, how they train the animals, buffaloes, horses. She sees hosts being taught to perform, a group of cowpokes laying cards get in an argument and draw their guns and then start over, a couple of female hosts are programmed lesbian activity. They go up another level to Design – she watches a Westworld commercial showing her with the little girl – a previous bill – story line. Maeve can remember a past life and that she’s been at the Mariposa for 10 years. 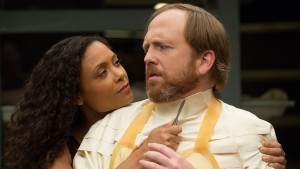 But these aren’t memories. It’s just what she’s been programmed to remember. She’s only been the Madame of the Mariposa for the last year. Felix’ bearded colleague, Sylvester discovers that he has been showing Maeve all these things and even teases him for dressing her up. He threatens to tell on him (wuss) but Maeve isn’t having it. She grabs a scalpel and threatens the guy. They show her all her programming – “I’d like to make some changes.” Maeve says. They discover that someone has already been tampering with her levels, someone with higher clearance than them. She wants to lower her loyalty and pain levels. . ”Apperception – “take that all the way to the top. please.” Maeve tells them. She physically responds to this, like an orgasm.

“Dear boys. We’re going to have some fun” Maeve.

MAN IN BLACK AND TEDDY 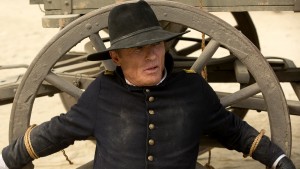 “The maze is an old native myth… The maze itself is the sum of a man’s life, the choices he makes, the dreams he hangs onto. And there at the center is a legendary man who has been killed over and over again countless times, but always clawed his way back to life. The man returned for the last time and vanquished all his oppressors in a tireless fury. He built a house and around that house he built a maze so complicated only he could navigate though it – I reckon he’d seen enough of fighting.”Teddy

Teddy explains what he knows of The Maze to Blackie. Could Arnold be there waiting? Blackie and Teddy come across a garrison of soldiers. They can’t get around them so they decide to try to go through them by disguising themselves as union soldiers. The problem is a couple of soldiers remember Teddy and Teddy kills them. They get captured and tied up. This is the first time Blackie actually doesn’t know what to do. But Teddy does. When they try to brand Teddy with The Maze insignia, Teddy remembers he helped Wyatt murder everyone in some past incident which is why they’re so mad at him. Teddy somehow breaks free mounts a wagon that has a gatling gun and mows down everyone in the camp. Blackie is impressed. 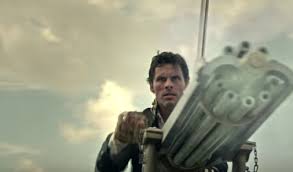 “You think you know someone” Blackie.

Teddy has become a new man since that meeting with Ford in the cantina. Did Ford trigger something in him by just speaking to him? It sure seems that way.

They continue they’re search for Wyatt and the entrance to The Maze. 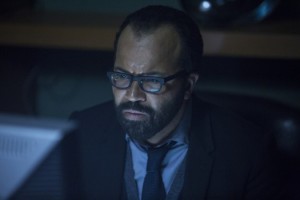 Elsie and Bernie try to figure out who is the saboteur. The stray was a legacy model, meaning one of the first hosts created. Bernie has to go down to Floor B82 for Restricted personnel to be able to access the old system. While he’s down there, you’ll find a cool Easter egg lurking in the background – You can make out Yul Brenner’s Man In Black from the 1973 film. Nice touch. Bernie sees that there are 5 anomalies detected in the park, 5 host not registered with the new system. 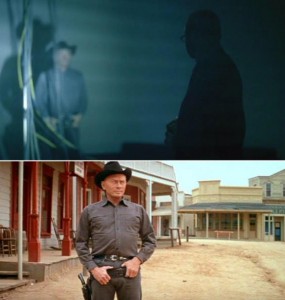 He locates them in Sector 17 – designated off limits for future narrative developments. Bernie travels there fast and easily. It looks more modern. A forest. A modern house. A man comes out for wood for the fireplace, Bernie enters the house. An older couple and 2 young boys “Are you Arnold?” Bernie asks. One of the boys is the same boy we’ve seen before. It’s obviously a young Ford and this is Ford’s family. The man speaks with a Scottish accent and attacks Bernie. Ford shows up and stops them.

”They respond to mine” Ford says. 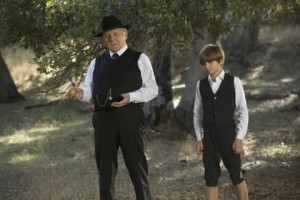 These hosts are first generation. “What our new designs gained in efficiency they lost in grace.” Ford. The only ones left in the park that Arnold built himself. Arnold built them as a gift to Ford. Bernard questions how ethical this is. “If you could see your son again Bernard, would you want to?” Ford asks. Bernie doesn’t answer but you know he would. He leaves them and goes back to the lab.

Later in the episode Ford finds young Ford in the woods and asks where their pet dog, Jacques, is. The boy leads him to where the dog lays dead. Ford takes the boy back to the lab and asks the boy what happened. The boy tells him a vague story. “Analysis”, Ford tells the boy which puts him in ‘truthful’ mode.

Someone told him to put it out of his misery. A voice, Arnold, said if it was dead it couldn’t hurt anything anymore. Ford seems disturbed by this. This is something he doesn’t control and it seems like he controls everything. 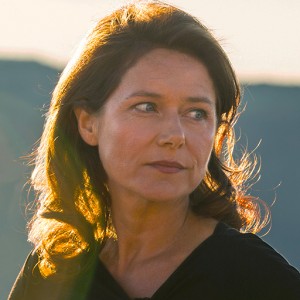 Bernie speaks with Cullen and tells her that Ford knows about them. She ends it, worried about how it will look to the board. Poor Bernie.

Lee Sizemore seems to have gone off the deep end after Ford nixed his Caligula style narrative. He’s boozing it up by the employee pool. Cullen wants him to help with the holes in the narratives caused by Ford’s new narrative. “If Ford can’t pull this off the board will be looking for a replacement but they won’t be looking here.”, Cullen tells him. Sizemore then spots a hot looking gal and comes on to her. At first, I thought Cullen may sent him a host to boost his confidence but that wasn’t the case. It turns out she’s Charlotte Hale, the top executive on the Davos Board who’s come to assess the situation. Sizemore is real loser.

Bernie comes knocking on Cullen’s door. She says ‘why you comin’ round here? I revoked your privileges!’ But he just wanted to confide in her about what he’s discovered. The issue started with the stray but it’s bigger than that. He explains that he always trusted Ford but now there is reason for concern. Just before he tells her about someone tampering with the data and sending voice messages to the legacy hosts Elsie calls him and tells him that Cullen is behind it. She also says that someone else is involved but she hasn’t figured out who yet.

Elsie keeps looking at the data when she must have found something juicy. She says “what the fuck” and “holy shit” then hears a noise. Someone grabs her from behind. ARNOLD!!!!! (And I don’t mean Schwarzenegger)

There are 82 first generation hosts and Arnold designed 47 of them. Bernie wants to know how many are still in rotation. Delores is the original but who else? The Man In Black? Himself?

Ford looks through a sketch book of drawings showing the development of the hosts. We see a drawing of Delores and a page that has The Maze. I assumed this was his book but could it be Arnold’s? He also sees The Maze carved into a table at Lawrence’s village. Is it possible that Ford doesn’t know where The Maze is or how to access it?

Sizemore shows up in the surveillance room and takes a piss all over the Westworld map!

This scene just gives me the creeps. Every time I see it I get the shivers. Yuck! 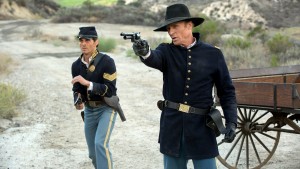 3 William is The Man In Black

5 Someone must die before the end of the season. I’m pulling for Sizemore.  He’s an ass.