THE WALKING DEAD S7EP2 THE WELL 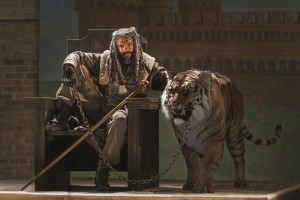 “Drink from the well, replenish the well.” King Ezekiel

Well, some of my friends were bored with this episode but who wouldn’t be after the season premiere! We absolutely needed a sorbet of pomegranates to sooth our battered psyches from last week. No pork for me, thanks. Episode Two provided our first look at a new community – The Kingdom, led by a very interesting fellow indeed. 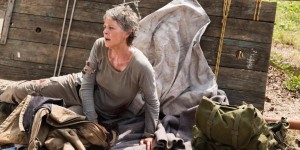 The cold open showed Morgan and Carol being attacked by Walkers and members of The Kingdom, in their makeshift suits of armor coming to the rescue. As seen by Carol’s POV, the Walkers appeared human again just before they were dispatched post haste. She was obviously in a fever state from her wounds and unable to protect herself. She stumbles near a house and sees a woman standing in the window but of course, the lady was no lady! The lady was a walker! 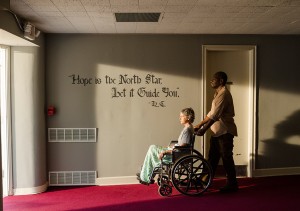 When she comes to, she finds herself in a bed with Morgan keeping watch. He explains to her (and to us) that the place is called The Kingdom and they have been taking care of her and he has been helping out in return. He wheels her through the community, which looks like quite a large community that grows a bountiful amount of produce. He wheels her into an auditorium and introduces her to the leader of The Kingdom – King Ezekiel. He sits on a throne in the middle of the stage, holding a staff and flanked by a huge tiger, Shiva, which is kept on a thick chain which the King holds.

Carol can’t help but find this all too ridiculous but plays along as only Carol can, using her sweet lady in the button down sweater act. King Ezekiel speaks in an old tyme language with a regal air. He offers Carol a pomegranate! His steward, Jerry, walks over to Carol with a large bowl and a big smile!

Carol’s reaction to all this is amazing. I’ve missed the old Carol and was growing tired of the ‘woe is me! I’ve killed so many people’ Carol. She was back to her wily ways, scheming and planning her escape from this crazy place she found herself. 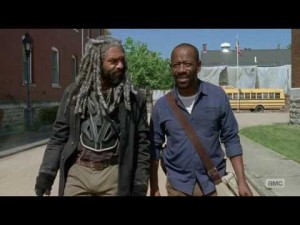 Meanwhile, Morgan was embracing the new community, helping them round up pigs. The unusual thing was that they were deeding the pigs ‘walkers’! This didn’t make sense until we found out why they were capturing the pigs in the first place. It seems The Kingdom is also under Negan’s thumb and they were tasked with tithing 8 hogs. So they fed them walkers in spite, so that Negan’s people will get sick. Pretty gnarly!

Not all of Ezekiel’s ‘knights’ are too happy about the arrangement. Richard, the leader of Ezekiel’s security force gets into it with one of the saviors. He easily got the best of him but Ezekiel had to tell him to stand down and then the Savior gave him a beat down. 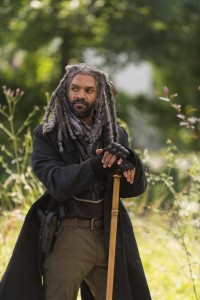 Ezekiel has not told his people about this arrangement for fear that they may want to rebel and fight back which would lead to much loss. I can already see Rick now looking at all of these people and counting them up with the Alexandrians and The Hilltop and plotting a war against the saviors. (Southern drawl) “I know if we all band together we can win!” Rick will tell them assuring more death and destruction which seems to follow Rick wherever he leads. 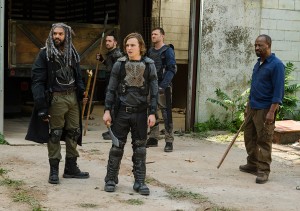 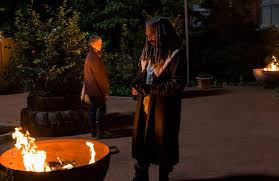 When Carol makes her move to leave she is intercepted by King Ezekiel and Jerry. He excuses Jerry and tells Carol that he sees through her act.

“This place is a joke. You are giving people a fairy tale.” Carol tells him.

He then drops his accent and regal dialect and confides in her that he used to be a zoo keeper and acted in community theater pre-zombie apocalypse. He saved Shiva and together they arrived at this community where he played the part of King Ezekiel because he felt that this is what the people needed. He asks her to stay but understands if she wants to leave. He makes a proposition: “You can leave and not leave.”

Morgan escorts her back to that house from the beginning of the episode. She kills the lady zombie inhabitant and sets up shop. As she’s settling in there’s a knock on the door. She hears the purring of a large cat. She opens the door to find King Ezekiel and Shiva. He’s brought a housewarming gift: a pomegranate. Carol smiles. Hmmmmm could this be a budding romance?

Ezekiel is great! Here is a guy who just wants to help and take care of people. The opposite of Negan. He also seeks the peaceful way. The opposite of Rick. I can see Morgan becoming a believer in this place which means it will be destroyed!

I really like Robert, the head of security for The Kingdom. He is going to come in handy when the time comes. 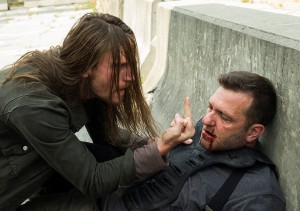 Pomegranates are known as known as the “fruit of the dead” in Greek mythology. 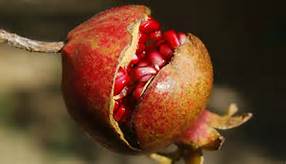 1 Ezekiel and Carol are going to become a thing.  Sorry Carol-Daryl shippers!

2 Morgan will start using his gun again when Ben gets killed.

3 Shiva is going to kill many Saviors! (before being destroyed!)

4 Robert is the new Abraham

5 We will hear more from The Kingdom Chior. What will they sing next?

I liked “The Well” and I liked Ezekiel and the new community. It was a nice light visit after last week and before next week where we delve into Negan’s lair and the torture of Daryl. Look for Swight to become a major player in things to come.