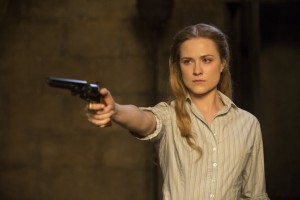 “You got any stories, friend? Old Bill

Ford is back in the basement talking to ‘Old Bill’ again. Just as Bernie likes talking with Delores, Ford likes talking to ‘Old Bill’. But Ford isn’t into what Bill thinks. He uses him more as therapist he can talk to about himself. He tells Bill a story about the time his father bought his brother and he a greyhound, a racing dog. The dog was raised to chase a piece of felt around a track but they never get to catch it. One day his brother let the dog off his leash just as the dog spied a cat. The dog took off like a flash after that cat. Only this time the greyhound caught its prey and to the horror of everyone watching, ripped that cat to pieces. It had spent its life chasing that piece of felt and now that it had caught it but had no idea what to do afterwards. Obviously, this is a metaphor for the hosts, especially Delores and Maeve. They have been in their story loops for so long and now they are going off on their own. What will they do? Whatever it is, destruction will most certainly be included. 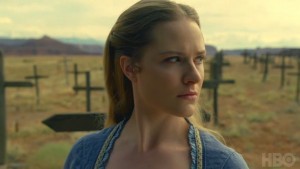 “Show me how” Delores

As Delores wanders through a graveyard she hears Arnold’s voice. They are now clearly communicating with each other. William, Logan and Delores arrive at a town that seems as debauched as it gets. It’s aptly named ‘Pariah’.

When they finally get to meet El Lazo he turns out to be Lawrence. They are tasked to steal a shipment of nitro from some Union soldiers to give to the confederates. Delores wants to do it without killing anyone but Logan starts trouble. William ends up having to kill all the union soldiers on the wagon. 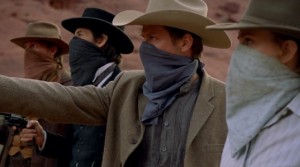 That night they all celebrate in a brothel right out of Eyes Wide Shut. Delores wanders into a room where a gypsy woman will read her tarot cards. Delores draws a card and it has a picture of The Maze on it. She looks at the gypsy woman and it has become her. “The Maze.  You must follow The Maze.” 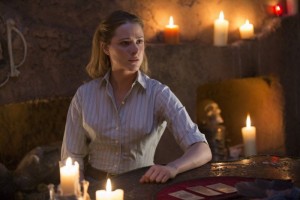 She runs outside to see El Lazo filing up a dead body with the nitro and replacing the nitro with tequila. The old switcheroo! She tells William that they have to leave but the confederate soldiers discover the switch and take Logan in custody. Logan yells out for help but William decides to leave him. Logan almost looks proud of him as he is beaten.

William decides not to help him and he and Delores run but come across the general and some men. William tries to kill them but gets overtaken. Delores ends up killing them all.

The catch a moving train headed out of town. El Lazo is on it with the dead body filled with Nitro. They come to a guarded truce.  “Now that we’re friends, you can call me Lawrence.” William and Lawrence share a drink while Delores looks at the coffin that has the nap of The Maze on it. 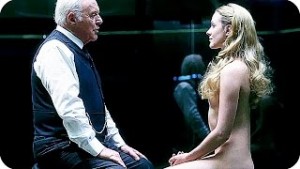 In the middle of all this Delores ends up back in the lab with Ford. She is naked this time.

“Tell me Delores do you remember the man I used to be? Ford.

“I’m sure you remember Arnold, the man who created you?”

“What was the last thing he said to you?”

“He said that I was going to help him. Help him destroy this place.” Delores

Once Ford leaves Delores says, seemingly to the unseen Arnold, “He doesn’t know.” I didn’t tell him anything.

These scenes between Delores and Bernie and now with Ford seem odd. Could these be some sort of telepathy sessions? They can’t really be pulling her out of the park. 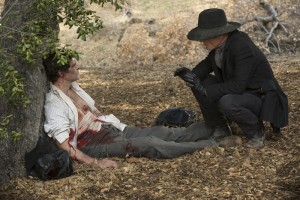 “As a friend of mine used to say, “there’s a path for everyone.  Your path leads you back to me.”  Black

Teddy seems near death so Blackie comes up with an idea. He slits Lawrence’s throat and hangs him up by his feet, draining blood into a bag which then uses as a transfusion to keep Teddy alive. Did he just make him drink the blood? Yuck! He tells Teddy that Wyatt has Delores and that triggers his protect and save Delores mode. He finds new strength to carry o the hunt for Wyatt. 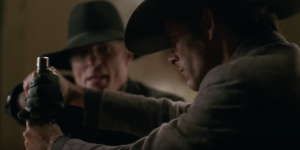 Black and Teddy stop off at a cantina for a drink and lo and behold! Ford shows up to pour them! This is the first time Blackie looks surprised by anything. “How am I doing Robert?” he asks Ford.

They must know each other from the very beginning. Blackie takes his knife and threatens Ford but Teddy stops him. He’s programmed to protect Ford. Black asks Ford if he came there to talk him out of seeking The Maze but Ford has no intention of that. “Far be it from me to get in the way of a journey of self discovery,” Ford tells them and then goes on his way.

How can Ford just show up like that? How far is the main facility from the park? 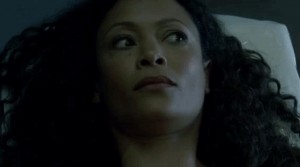 Maeve ends up in the lab for repairs again and is brought before the same lab techs that worked on her before. The younger one, Felix is freaked out about seeing her again; of course he must see her in repairs constantly.

Felix has been trying to reanimate a dead bird and finally succeeds. The bird flies around the lab room and to his shock and horror lands on the now awake and upright Maeve’s finger.

“Hello Felix. It’s time we had a little chat.”

Elsie bribes her way into examining the stray host before it is to be incinerated. She discovers a mini satellite imbedded in its arm. She tells Bernie:

‘Someone has been using the stray to smuggle data out of the park.”

Delores has really changed. She’s gone from put upon farmer’s daughter to gunslinger. Has Ford reprogrammed her as he did with Teddy?  Is her change just part of Ford’s new narrative?

You now have Lawrence, William and Delores, Blackie and Teddy all looking for Wyatt. What happens when they confront each other?

1 Maeve will have Felix reprogram her. She will change her loop just as Delores has. 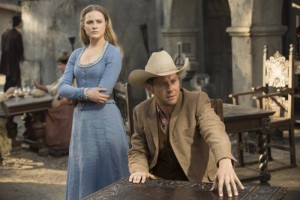 3 Logan is still playing a game. William is starting to believe the stakes are real. I think William will actually kill Logan. 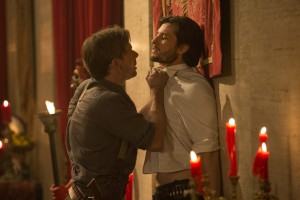 4 Arnold is still alive. He’s at the center of The Maze.

5 Lee Sizemore, the British narrative director must be the one sneaking data out of the park.