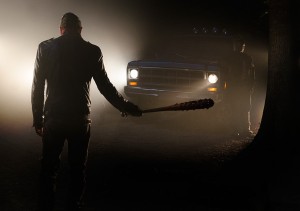 “You are mine. The people back there, they are mine. This [the axe], this is mine,” Negan

Well that was absolutely horrific. The wait is over and we finally found out who met their demise at the hands of Negan and his ‘nasty girl’ Lucille. No matter what you thought of this episode, Jeffrey Dean Morgan crushes it as Negan! (I had to go there) He is charismatic and scary. I mean absolutely nuts! Andrew Lincoln also gets kudos for delivering “bigly” in this season opener. The entire cast was exceptional and must have been completely dehydrated from all the crying after shooting this episode.

The episode picked up where last season’s finale ended. Someone is dead and we don’t know who but blood is splattered across Rick’s cheek. While sobbing is heard in the background Rick remains defiant.

Negan, still holding his bloody bat, is stunned by Rick’s defiance. He decides to take him for a ride in his newly acquired RV. Riding into a fog, running over walkers, they slam into the windshield leaving a bloody splat.
“Remind you of anybody?”

Negan explains to Rick that he is no longer inn charge and that he now belongs to him. He takes Rick’s axe and tosses it out the door into a herd of zombies that have surrounded the RV. “Hey, Rick. Go get my axe.” he tells Rick. He throws Rick out the door and Rick can only push walkers away as they surround him. This truly horrifying. He manages to get to the ladder and climbs on top of the RV.

“Guess you thought you were all going to grow old together, sitting around the table in a happily ever after. No. It doesn’t work like that, Rick. Not anymore. Think about what happened” Negan tells him. 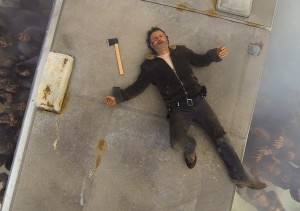 It is then that we finally see what we have been dreading. What we were so angry about being denied 7 months ago. Negan plays eeny, meeny, many, moe and you….are ….it……Abraham! Negan brings down his bat upon his head. Even when you know it’s going to happen you jump in your seat. Abraham straightens up and tells Negan to “suck my nuts!”.  Abraham goes out on his own terms with his defiance and with one last great line. He also sends Sasha a goodbye when he flashes the peace sign. I missed it, too. Watch again (if you can). 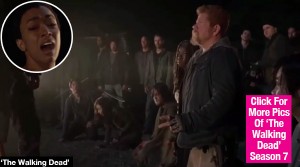 Negan swings Lucille again and again while Rosita and Sasha can only watch in mortified horror. He puts it together that Rosita and Abraham were an item and taunts her with his bloody Lucille. Daryl snaps. He jumps up and pops Negan in the mouth.

“That! Is a no no! Not one bit of that shit flies here!” Negan says.

Dwight wants to be allowed to kill Daryl but Negan says no.

“Now I don’t know what kind of lying assholes you people been dealing with. But I’m a man of my word. First impressions are important. I need you to know me. So back at it!” 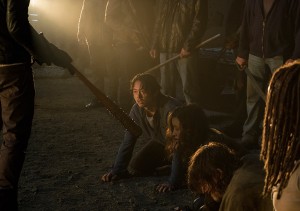 He wheels and brings his bat down upon Glenn’s head. Holy crap! Glenn manages to raise he head, his left eye bulging from his skull. He tries to speak but is unintelligible.
“Are you trying to speak? Buddy, you took a helluva hit!

“Maggie, I will find you.” Glenn manages to say before Negan and Lucille turn his head into mush.

The look of agony on Maggie’s face is unbearable. How did she not just fall over dead herself?

Rick lays on top of the RV remembering all this. Negan is yelling at him from inside that he better bring him his axe or he’s going back there and killing everyone. 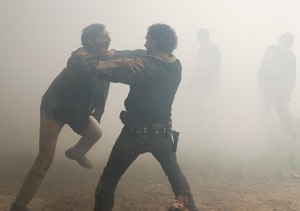 Rick finally retrieves it and with Negan’s help via machine gun, he makes it back into the van.

Negan drives them back to the clearing where it’s now morning and everyone is still on there knees. Negan drags Rick out of the RV and throws him down in front of the group.

“That trip was about the way you looked at me,” he says. “I wanted to change that, I wanted you to understand. But you’re still looking at me the same damned way, like I shit in your scrambled eggs.” Negan says.

Negan tells his men to stand behind each member of the group and point a gun to their heads. He then has Carl come stand beside him. He wraps his belt around Carl’s upper arm, has him lay flat on the ground, rolls up the sleeve of his left arm and using a marker, draws a line where he tells Rick to use the axe to chop his son’s arm off. Negan playing God to Rick’s Abraham. Rick is sobbing uncontrollably begging not to do it. Michonne tries to please with Negan, “We understand.” But Negan says, “You understand! I’m not sure Rick does!”
Negan starts counting. Rick is begging. Even Carl tells him to do it. And just as you think he will, Negan stops it.

“You answer to me. You provide for me. You belong to me. Right?”

Rick says, “Right.” He is now a completely broken man.

“Now THAT is the look I wanted to see! Today was a productive damn day!”

To make matters worse, Negan takes Daryl with him. He likes his spirit but he also takes him for leverage. If Rick tries something foolish Daryl will be hurt or he will make Rick to the dirty work for him.

“Things have changed. Whatever you had going for you. That is over”

“Welcome to a brand new beginning, you sorry shits!” Negan then bids them ‘ta ta’.

Negan and his men leave but not before taking some Polaroid’s of Glenn and Abraham’s smashed skulls for their wall. They leave the gang a truck they can use to gather ‘stuff’ that they will need to give Negan and are given one week to come up with it. 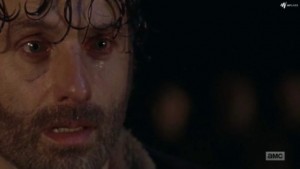 The gang is left to pick themselves up and take their fallen comrades home. Maggie feels guilty that everyone was out there because of her but her first response is that Rick needs to get back to Alexandria and start preparing to fight Negan. Rick knows this is impossible. Sasha, Rosita and Eugene pick up Abraham’s body. This is about as solemn and gut wrenching as any place they have been to yet.

This changes everything. They do not have the manpower to take on Negan and his army. My feeling is they will need to team up with The Hilltop and the soon to be introduced colony The Kingdom to have enough people to take on Negan. I don’t see this happening for awhile though.

The episode was incredibly graphic in its violence but I feel it was necessary to not only make it clear to Rick and his gang but also the audience that this villain is different. He keeps his word. He has no problem taking the life of anyone. I felt the show in the last year or two had started playing it too safe. I had a real problem with the way they faked Glenn’s death last year. I also had a problem with the way they split up Negan’s entrance. I still feel they could have combined last year’s season finale with this year’s premiere into one episode. Of course, it would have made the season finale awfully depressing. Still, I’m satisfied with the way they are starting off here. I believe we have seen the worst possible thing right away and the rest of the season will be how they adapt to the new way of things. We will also get to know Negan and how he works. We know eventually, Rick will rise up again but it won’t be easy. 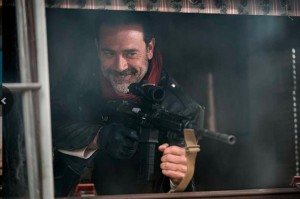 The show is in its seventh season and I feel like I have no idea what’s going to happen or who may die next. A show that’s been on this long and can still make you feel that way is rare. I’m willing to keep watching to see how this plays out.

The title of the episode is taken from the season finale of season one. They are in the CDC and Dr. Jenner has set the facility to self destruct. Rick convinces him to allow them to leave and tells him he’s ‘grateful’. Jenner tells Rick ‘the day will come when you won’t be.” 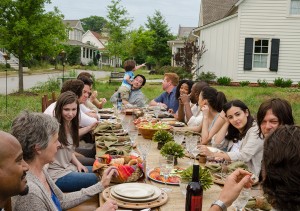