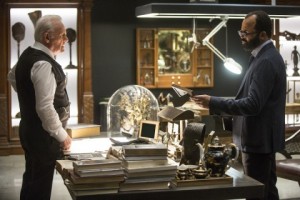 Each episode brings new intriguing information not only about the people who created this world but also the ‘hosts’ that inhabit it. Each episode is a piece of a puzzle and we are trying to piece it all together so that we may understand where the story is taking us. This is what seems to be happening to the host as well, especially Delores. 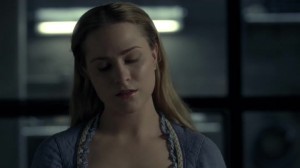 “I wonder if I’ve been changed in the night? Let me think; was I the same when I got up this morning? I almost think I can remember feeling a little different. But if I’m not the same, the next question is, ‘Who in the world am I?'” Alice In Wonderland

Bernie continues to have private sessions with Delores. He brings her a present, a copy of Alice’s Adventures In Wonderland. It’s a book he gave his son.
“Where is your son?” Delores asks.
“Somewhere you wouldn’t understand”, Bernie tells her.

We learn that Bernie’s young son died not too long ago and perhaps he has been using Delores as a means of therapy. But he is instilling ideas in her that are carrying over into her world in the story.

“You’ll stay in the loop?” Bernie asks her, meaning she will stay within her programmed story lines and she says ‘yes’ but we all know where this is headed.

In her story loop with Teddy, he tells her they will go away together ’someday’. Delores questions him, ‘why not today?’

“Someday sounds like something someone says when they mean never”, Delores says to Teddy.

She’s right. Her and Teddy will never go away together and find happiness. 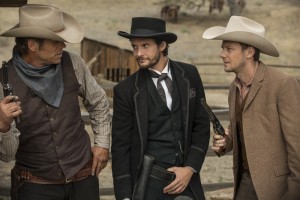 William finally gets some action when he thwarts a prison escape and saves Clementine. In the process he actually gets shot! he complains to Logan who tells him, “You can’t get killed but it wouldn’t be much fun if they couldn’t shoot back.” William wants to go off with the bounty hunter after some bandits which Logan thinks is silly but he’ll go along. Before they leave William sees Delores coming out of the store. This time it’s him who picks up that rolling stray can and hands it back to her.

FORD AND THE NEW NARRATIVE 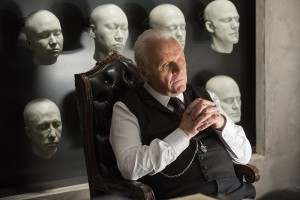 Ford’s new narrative for the park is going in motion and he’s carved out a huge section of the park for it. He gives Teddy a back story that will be a part of the new narrative. Teddy was a Union soldier and his commander was a man named Wyatt who went crazy and has now become the mad leader of some crazy cult of wackos. 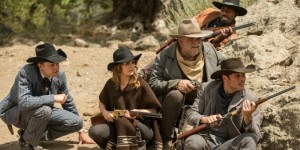 When Teddy is next with Delores a posse comes along and tells them they’re looking for a guy named ‘Wyatt’ and that triggers Teddy to follow the new narrative. But as always, he tells Delores he has to go but ‘someday’ they go off together and find happiness. He rides off with the posse which includes some park guests. 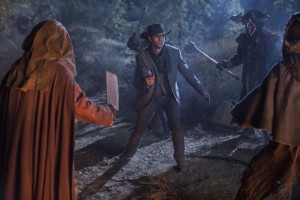 They come across two men tied to trees, they’re bodies decaying and drawing robot flies. Shots ring out. They are being fired upon. One of the guests decides this is too much for him so he rides back with some of the hosts. Teddy, the sheriff and the female guest who has been riding with Teddy being bounty hunters also goes with them to chase Wyatt. After night fall, however, they are attacked by masked men who kill the sheriff and Teddy. Teddy gives the woman a knife and tells her to run. Needless to say she’s freaking out! 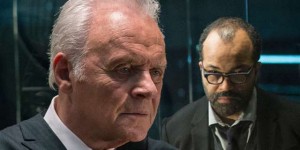 “Arnold imagined the tiers of artificial intelligence as a pyramid. His base was memory. Above that, improvisation. Then self-interest. And at the very top… “He never got there,” Ford

Elsie, the young programmer, does some extra research into Walter’s behavior from the first episode. Walter is a bad guy and he went berserk and shot 6 hosts while drinking a bottle of milk. Elsie tells Bernie, that all six had previously killed Walter in previous story loops. Did he somehow remember this and seek revenge? Also, in the video of the incident, Walter is carrying on a conversation with an imaginary person he calls ‘Arnold’. 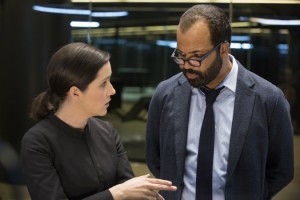 Bernie goes to Ford about this and Ford tells him that Arnold was his partner and that they started Westworld together. But Arnold had a different idea about what the park and the hosts could be. He wanted the hosts to have consciousness. They initially heard an inner monologue but this caused them to malfunction and act crazy. Humans that hear voices in their heard is not usually normal. But the hosts still respond to voice triggers. When Abernathy told Delores about the ‘violent delights” this seems to be a trigger that causes memories from the past to start popping up. Ford tells Bernie that Ford died in the park and that his personal life was marked by tragedy.

Could The Man In Black be Arnold?

“The only thing stopping the hosts from hacking us to pieces is one line of your code.” Stubbs

Elsie (Shannon Woodward) and Stubbs (Luke Hemsworth) head out into the park looking for a stray. A group of cowhands are stuck in a loop because the one guy who is allowed to use an axe to start a fire wanders off. It seems the programmers are very particular with what hosts get to handle deadly weapons. In the tent, Elsie finds numerous carvings that Stubbs identifies as the constellation orion. This hosts seems to have wandered off in search of the stars. They find him trapped in a crevasse. Elsie puts him in ‘sleep mode’ and Stubbs goes down to get him. He starts to saw his head off! It must be a security measure when a host malfunctions. Well this guy suddenly wakes up and climbs out. Elsie is terrified! The guy picks up a large rock and just when you think it’s going to kill Elsie. It starts bashing its own head in! It commits suicide. That is not standard procedure. 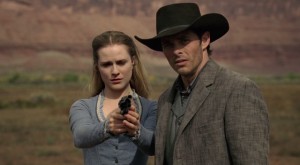 It all comes back to Delores. In town she gets harassed by Walter who is trying to hook up Delores with one of the male guests. But when Teddy comes to her defense the guest backs off. “I wanted something easy, “ he says. So off they go to the saloon.

Teddy then tries to teach Delores how to shoot a gun. She cannot pull the trigger.
“Some hands aren’t meant to pull a trigger, “ he tells her. 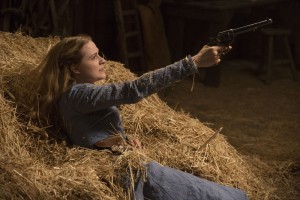 She isn’t programmed to handle a gun. She is to be fought over but not to fight for herself. So when Teddy rides off after Wyatt, Delores arrives at the ranch by herself to hear screams, as always. Her parents are being attacked and murdered. She happens on them and finds Walter there with the new male guest she encountered in town. She looks down at her dead father and she begins to see Abernathy laying there, the host that used to be her father. Walter drags her into the barn, the way the Man In Black did in Episode one. As he prepares to rape her she begins to see Blackie standing there, no Walter. Her mind is seeing the past incarnations of this loop. Only this time, she has a gun. “Do you remember?” She points the gun at Walter. “Kill him”, she hears in her head. She fires. She guns him down.

Who has pout these thoughts in their heads?

The last scene has William and Logan sitting by a campfire when Delores comes wandering in and fainting in Williams’ arms. Looks like the start of a new romance.

There are some scenes between Teddy and Delores that just involve them. There are no guests around to witness it. They are programmed to play this out solely so that they appear more real to the guests.

There was a scene between Bernie and his wife (Ex?) talking about there son. “This pain is all I have left of him,” he says. Ford knows he is still mourning and warns him not let it affect the way he treats the hosts. Of course, Bernie is already crossing lines with his private sessions with Delores.

Bicamerlasim – is a hypothesis in psychology that argues that the human mind once assumed a state in which cognitive functions were divided between one part of the brain which appears to be “speaking”, and a second part which listens and obeys—a bicameral mind.

This is how Arnold set up the hosts originally and they went insane. This is what seems to be happening now. But why? Maybe Blackie isn’t Arnold, maybe Arnold is still alive somewhere in the park like a ‘phantom of the opera’ style character?

FIVE THINGS I THINK I KNOW

1 Ford is really strict about those hosts being naked when they’re in the lab. He doesn’t want anyone to forget that they are not real and fell no shame, in fact, have no feelings to hurt. This point was strongly made in this episode for a reason. Did he forget this fact when he was younger? Did this lead to tragedy? Arnold’s death?

2 Bernie is the sabatour, perhaps, unwittingly.

3 Delores is the key. She’s the Original. There must be something in her programming that will start Armageddon. Is she the center of ‘The Maze’?

4 Those markings under the skull of the guy Blackie killed and scalped.  They must be under every hosts’ skull.

5 Teddy was Maeve’s husband in a past loop.