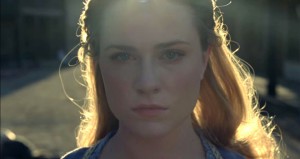 Delores wakes in the middle of the night and walks outside away from the house.

This is essentially, the cold open. This scene bookends the episode. 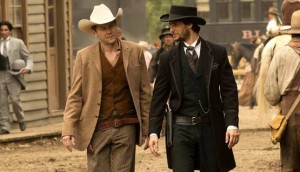 “This place has the answer to the question you’ve been asking yourself; Who you really are.”Logan to William

We get to see a little more about how guests arrive and get situated to the park. Two men, William (Jimmi Simpson) and Logan (Ben Barnes) arrive by train and are greeted by lovely women as they exit.

“Are you real?” Williams asks.
“Well if you can’t tell does it matter? She answers. 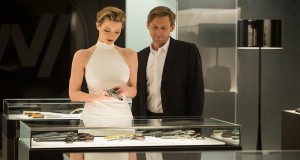 William is taken to a room where he can pick his wardrobe, his gun and other parts of his costumer. It’s made clear that his vacation has begun and he can linger in the dressing room with his host for awhile if he wants. But William, it seems, is a goody two shoes. He passes because he doesn’t want to keep his friend waiting. The last thing he has to choose is, of course, his hat. Black or white? William chooses white and enters a room where his friend is waiting, wearing, of course, a black hat.

“How do we get into the park? William asks and at that moment they start moving. They are on the train that will lead them to Sweetwater.

These characters echo the parts that Richard Benjamin and James Brolin played in the 1973 film. William is the kind and gentle newbie while Logan has been to Westworld several times and is completely comfortable indulging his every whim. 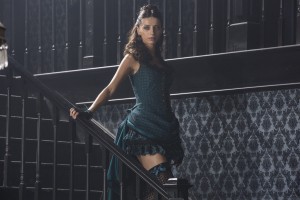 While Logan is in bed with two women and one man (I assume there are all hosts but who knows), William is in his room with Clementine the young prostitute. He again resists indulging explaining to her that he has someone back home. These two men couldn’t be more opposite and as William tells Clementine, they aren’t friends.

The next morning William notices Delores. She comes out of the grocery store and drops a can that rolls away from her. We’ve seen this scene twice before in episode one. Teddy picks it up and hands it to her the first time, The Man In Black the second and now it’s William that goes over and hands it to her. It’s a tip off that William will seek her out in future episodes.

The Man In Black 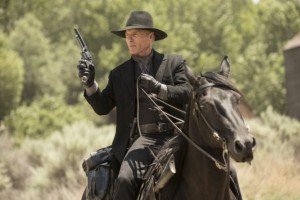 “The maze. How do I find the entrance?” Man in Black

Ed Harris is absolutely chilling in this role. Perfect casting. He rides into the scene of a hanging. He tells the sheriff and his men that he needs to speak to their blind folded prisoner. The posse doesn’t take it too well, as expected, and Blackie proceeds to slaughter them all. He addresses the prisoner, Lawrence (Clifton Collins Jr.) as an old friend as with most of the hosts he runs into. He tosses the scalp of the guy he took at the end of episode one to Lawrence. There is a design on the inside of the cranium.
“It’s the maze, the deepest level of this game. You’re going to help me find the entrance.” Blackie tells him. 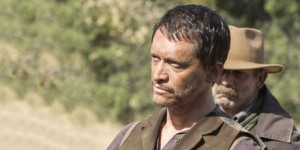 Blackie is leading Lawrence on a rope into a little Mexican village. They stop at the cantina where the proprietor seems to recognize them. Lawrence is greeted by his wife and daughter. Blackie seems to know this is Lawrence’s home. They sit at a table and Blackie takes out his gun and loads it. He wants to know where the entrance to the maze is. Lawrence pleads ignorance. A group of men form around them, friends of Lawrence’s. Blackie blows them all away. 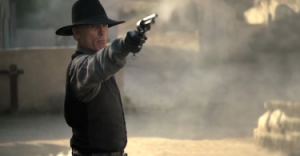 “You know why this beats the real world, Lawrence? The real world is chaos, an accident. But in here, every detail adds up to something.”

Lawrence still refuses to tell him. Blackie kills his wife and threatens the little girl. But suddenly the little girl looks up at him, unafraid.
“The maze is not for you”, she tells him.
“See Lawrence, always another level.”
“Follow the blood arroyo to the place where the snake lays its eggs.” she instructs.
Blackie then rides off with Lawrence in tow.

“This time I’m never going back” Man in Black 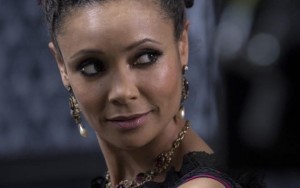 “This is the new world, and in this world, you can be whatever the fuck you want”     Maeve

As Delores walks the streets of Sweetwater she keeps hearing a voice “remember”. She starts remembering the slaughter in the streets that took place in episode one. Who is this voice? Who planed it in her program? Ford? Bernard? She runs into Maeve (Thandie Newton) and she leans in close to whisper in Maeve’s ear, “these violent delights have violent ends.” She walks off but it seems to have triggered something in Maeve. 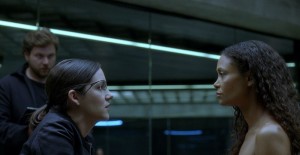 When she begins her seduction of a young newcomer her usual story turns odd. She begins recalling a past life. An Indian attacks in an open field. The young man awkwardly takes his leave of her and she is pulled from the field and back to the lab. The guests are not having sex with her. So the young female technician technician makes some adjustments and sends her back out. She seems better but when chatting with Eddie (James Marsden) at the bar, he is suddenly shot down. She is visibly shaken. Later that night she has a ‘nightmare’. It’s that same memory. She is with a little girl, maybe her daughter, and they are living out in the open land when Indians attack, killer husband. She grabs her daughter and runs back to the house. She gets a shot gun and readies to defend herself. But it isn’t an Indian that walks through the door. It’s the Man in Black. She shoots at him but of course he isn’t harmed. 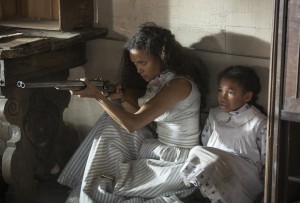 She starts counting backwards as she had told Clementine earlier, when you have a nightmare just count backwards and it will end. Only this time she wakes to find herself on a metal slab back at the lab. The lab technicians are freaked out. They have cut open her stomach to make a repair. She grabs a scalpel and runs out of the room. She runs through the complex and outside. She of course, is terrified. What is this place? Then she happens into a room where some techs are washing down a pile of bodies. She sees Eddie, lying there, naked and full of gunshot wounds. She crumbles to the ground.

Did she recognize Eddie? 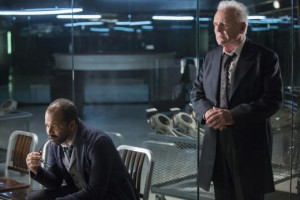 Bernie pulls Delores into the lab for private conversations. She is ‘The Original’ and he sees something special about her. It seems he feels he can get info from her about what’s going on inside the park, insight about the hosts that only she can offer.

She tells him what her father, Peter Abernathy whispered in her ear:

“These violent delights have violent ends” (from Romeo and Juliet)

This is what she then whispers in Maeve’s ear. So when Delores tells Bernie she has not repeated this to anyone she is lying.

“Have I done something wrong?” Delores asks.

“Have you done something wrong?” she pushes further.  Bernie doesn’t answer.

We also learn that Bernie is carrying on an affair with Theresa Cullen, the park Operations Manager. How will this complicate things? 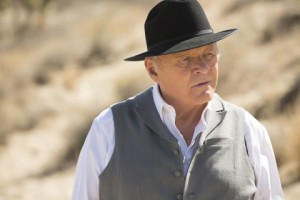 “You can’t play God without being acquainted with the devil.” Ford

Ford knows that Bernie covered for him. His ‘reveries’ triggered some malfunction in the hosts that seems to have been fixed.  But the Peter Abernathy issue is different. Bernie doesn’t feel that the photo was enough to cause Peter to malfunction in the way he did.

“Sabotage?” Ford says aloud what Bernie is hinting at.

At one point Ford ventures out into the park for a little walk.  He encounters a young boy who it seems is there with his parents and is bored.  Ford invites him along on his walk.  They reach a spot where there is an isolated church with a cross on a tall steeple.  Ford tells the boy to run along and not remember what he saw. The boy is a robot. Ford encounters a snake there as well, which is also synthetic. Could this be the sot that the little girl told Blackie to go to and where he would find the entrance to the maze?

Meanwhile, narrative director Lee Sizemore (Simon Quarterman) has been developing an exciting new narrative for the park and spent the episode ranting and railing at workers trying to prep the new hosts which include 20 Indians and some cavalry and various other new characters.  He introduces the idea along with the new hosts to the entire team including Bernie and Ford.  The narrative would include carnage like never before seen as well as cannibalism. At the end of his presentation Ford walks over to him and quietly says, “No.” 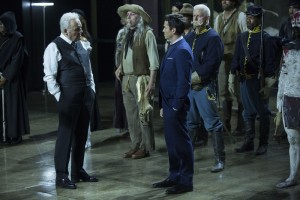 Ford does have an idea for a new narrative and he leads Bernie to the little church he went to before. This is where it will take place.  Could he mean the entrance to the maze will be the next storyline?  Could Blackie already be the ‘host’ that will be a major part of this new narrative.  Perhaps Ford has already begun to play out this new narrative without telling anyone?

We come back to the scene that began the episode. Delores walks out into the night.  She looks down and starts digging in the ground.  She finds a gun.

Whaaaaat?  Is she to murder someone? Who planted the gun?

A lab tech asks why we have the hosts speak to each other, as Maeve and Teddy do at the saloon. It’s supposed to enrich the experience. The more they seem like real people to each other the more it will be real to the guests.  But if they are retaining memories of their experiences than they will feel an allegiance, or friendship with these other hosts. Will they start defending each other against the guests instead of protecting the guests from each other? 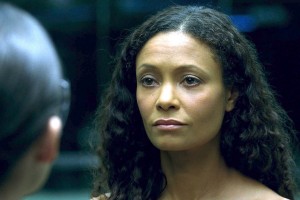 Is Maeve’s ‘nightmare’ a memory of what has happened or what’s to come?

1 If William and Logan echo the characters from the 1973 film then Logan will be the first human victim.  This may not happen until the finale.

2 Ford is behind the sabotage. Bernie is covering though may not know the extent of what Ford is doing.

3 Starting to think Blackie is a host.

4 Those hosts in cold storage including Peter are going to get out at some point. That will be disturbing.

5 James Brolin will appear in a cameo at some point this season. I just think that would be awesome!