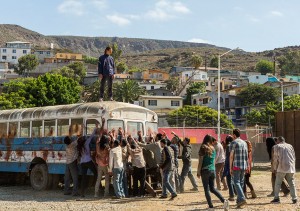 The two hour season finale covered a lot of ground. Plenty of answers and loose ends tied. I don’t usually say this but I feel like they moved too quickly to conclusion on some of these plot threads that have been built up over the last five episodes. Usually I get frustrated when shows drag out storylines but here I felt there was more juice to be had from The Hotel and the Crazy Chris stories. But, no matter. Off we go! 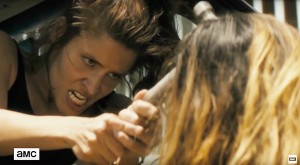 Ofelia is driving around the desert and having car trouble when she is attacked by a pack of walkers. She’s become really efficient with a hammer! But when she busts out the knife she really seemed to have become a pro! She would fit in with Rick Grime’s crew now!

She then gets shot at by what seems to be the remnants of a border militia guy. He apparently takes her captive but we’ll have to wait until next season to find out who he is and what group of crazies he belongs to. 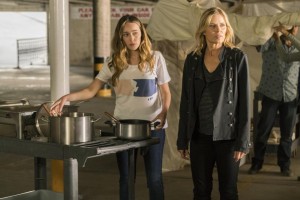 Travis has been holed up in his room, grief stricken over Chris. Alicia brings him some food and Travis apologizes for not believing her about Chris and not protecting her. She forgives him. She forgives everyone.

She runs into the Bro-migos in the parking garage. They tell them that they were in a car accident and that ‘Chris crashed the car and was killed.” She puts it together and realizes these were the idiots Travis told her about. She goes to Strand first with the info and they decide it would be best to just get them out of the hotel so that Travis would not find out and he would still have ‘hope’ because they feel he needs hope more than knowing the truth about his son. 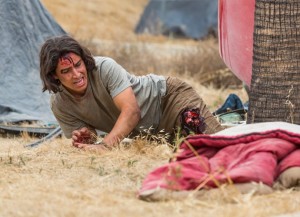 But the other people in the garage think that they’re giving special treatment to the gringos and cause a commotion. Before they can get them out Travis sees them and comes running down to the gate. Travis gets Brandon and Derek talking and they tell them that they let Chris drive and he crashed the car. We see this in black and white flashback as they tell the story. Chris breaks his leg in the crash and they decide to put him down. Well, Travis goes bonkers! He locks the door so no one can stop him from tearing these guys apart which he does. Pretty viciously, too. Eventually, Oscar and Hector break some windows and get into the room. Travis still in his rage hits Oscar and he’s badly injured.

Since Madison made the decree that anyone that attacks another person would be exiled from The Hotel it is decided that Travis must go. Strand tells Madison that she should let him go and stay at the hotel but she and Alicia decide to leave with Travis in the morning. But then Oscar dies during a procedure his doctor brother tried to perform on his brain swelling skull. The brother is understandably upset but Hector is beside himself! Huh? Since when is hector and Oscar so close? There’s a big showdown, the brother, Hector and Elena storm Travis’ room and the brother is ready to shoot Travis when Alicia sticks a knife in his chest! Her first non zombie kill. Strand helps them get a car and drive away. He stays behind.

I think they could have done a lot more with the hotel. Maybe they’re not done with it and we will revisit the place next season. I hope so.

Travis, Madison and Alicia drive to the Tijuana Costco to find it empty and abandoned. They find the bodies of Francesco, his wife and daughter. Marco killed them? Terrible.
Amazingly they find Francesco still had his wallet on him and wouldn’t you know it? The address to La Colonia was on his driver’s license! Marco should have checked there first! Somehow they know how to get to this address and find La Colonia now overcome with zombies! Including Marco, Antonio (Elena’s nephew) and the whole Tijuana drug gang (more on this later). The search for Nick will continue next season! 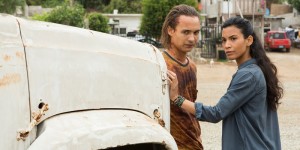 Nick sneaks out of bed with Luciana to go to the drug exchange with Marco. Marco tells him he doesn’t need them anymore and that he knows where La Colonia is.  He just made a deal with another gang that has plenty of drugs. “I like you but I don’t need you anymore. Either you leave or you die” Marco tells Nick.

Nick takes the message back to Luciana and Alejandro. It seems pretty obvious that they need to leave but Alejandro and Luciana want to stay. Meanwhile, one of the patients in the infirmary has died and become a zombie and attacks Nick. It’s mayhem! The zombie bites a guy’s nose off and a woman’s fingers before Nick performs one of the nastiest zombie kills on the series. He puts his thumbs through the zombie’s eyes and he really digs in there to finish him off. Then we see that Alejandro has been bitten in the arm. No problem, right? He’s been bitten before! He’s immune!

They send the bitten through the bus to be sacrificed to ‘the wall’. But the woman who lost her fingers could have been saved if they just chopped off her hand. Everyone knows that you spread walker guys all over them to walk amongst the walkers but they don’t know this handy bit of info? 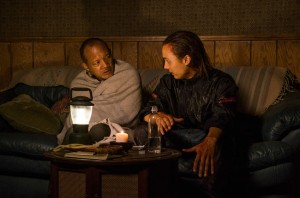 Nick starts packing and he forces Alejandro to fess up to Luciana that he isn’t immune, that the bit on his back wasn’t from a zombie. Even after that Luciana still won’t go with Nick. It’s crazy. How are they supposed to fight the gun toting drug gang with children and elderly folk? Eventually, Nick convinces Alejandro to confess to everyone that he isn’t immune so that they will agree to leave with Nick.

Marco, Antonio and their gang of merry men show up to find La Colonia deserted. They’re happy as clams! But Alejandro stayed behind. He had one more trick up his sleeve.  He drives the bus out of the fence allowing ‘the wall’ of zombies to enter La Colonia. You don’t see what happens but as I said earlier, by the time Travis, Madison and Alicia find the place Marco and his gang haven zombie-fied. 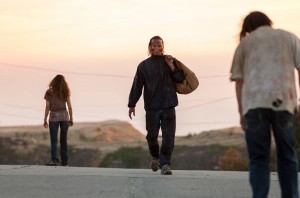 The episode closes with Nick (wearing a ridiculous outfit), Luciana and the rest of the people of La Colonia covered with walker guys and amiably making their way to the US border. All seems well until they start taking gunfire! Everyone scatters! Luciana is hit! NOOOO! It looks like more militia men who seem to think they still need to patrol the border to keep them illegals out. Maybe the guy who captured Ofelia belongs to this group.  We’ll find out next season!

I expected to see the return of Daniel but alas we barely saw Ofelia. It doesn’t mean he died in that fire though.  He could still return next season and I expect him to. 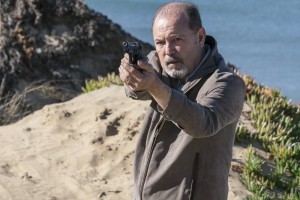 I didn’t expect Chris to be killed though I think we all wished for it. I expected him to be out there somewhere and return as a true villain.  That would have been interesting.

Strand didn’t have much to do. Now that Madison has left The Hotel will Strand take the leadership role?

The second half of season two was compelling. I think they could have fleshed out these stories a little more but let’s see what comes in season three. What new characters will be introduced? Let’s hope they return to The Hotel next season as well. They worked so hard to clear out the walkers and make the place a safe haven. Let’s hope these people get smarter fast.

See you all in a few weeks when I start recaps for The Walking Dead. Who do you think Negan is going to kill?