“I believe in fate. There’s a reason we met” Tyrell

Elliot and Tyrell have a bond. At least Tyrell believes they do. It’s actually a bond with Mr. Robot. Elliot is completely in the dark about what Mr. R planned with Tyrell. They arrive at a run down building where Tyrell has set up shop courtesy of The Dark Army. “Ready to look at what we accomplished?” Tyrol says to Elliot. Elliot looks at the computer screen and his eyes go wide.

It seems that Stage 2 includes blowing up the building that E Corp is using to warehouse all its paper records and by doing so, killing everyone also in the building. Elliot is not down with this.

Darlene survived! But she’s got Cisco’s blood all over her. Farewell Cisco. Dom and santiago get nowhere with their interrogation. Darlene just kept invoking the fifth. Then Santiago takes a dig at the USA Network.
“This isn’t Burn Notice. There are no blue skies for you out there. Characters like you are not welcome here. Right now you’re an enemy combatant. You don’t have any rights.”
Even when Dom asks Santiago leave the room so ‘two Jersey girls’ can have a chat. But that didn’t work either. Darlene is one tough broad. 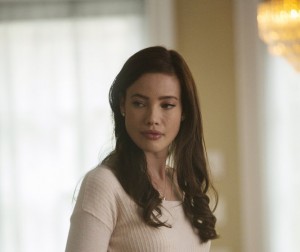 Joanna makes a visit to the place where the mysterious calls and gifts have been emanating from,. As expected, it was not Tyrell but who would have guessed it was Scott Knowles? Knowles looking disheveled and drunk explained to Joanna that his wife was pregnant when Tyrell murdered her.

“I wanted you to feel what I felt. I wanted to give you hope that I could stomp out.”, he tells her.

At first, Joanna seems sympathetic as she moved over to Knowles and stroked his head, But then, she turned on him. “You pussy! I hope she’s in hell! Fuck her and her fetus corpse!”

Holy crap! Well, Knowles goes berserk. He starts beating on Joanna and comes very close to killing her. Amazingly, he stops himself and calls 911.

Later on, she convinces her boyfriend, Derrick, to change his story to the police. It seems Derrick was a bartender at the E Corp party the night Sharon Knowles was murdered. Joanna wants him to say that he saw Scott Knowles coming down from the roof. Damn, she is one cold blooded Lady Macbeth!

Darlene keeps to her story that she was just out for dinner with her boyfriend when the gunman came along and killed him. But Dom says that they have witnesses that will finger her as the leader of F Society. Darlene holds firm and tells Dom off. “If you want any other details the answer is ‘suck a dick’!”
Dom takes a couple of beats before breaking out with a laugh.

Dom decides to do something drastic. She leads Darlene through the office where everyone looks at her like an oddity as she passes. They enter a room where Dom shows Darlene the big board where the FBI have laid out their case. Everyone is on it. It seems Dom and the Feds knew a whole lot more than anyone could have expected. Dom refers to the strategy as that of a python, the patient predator. And right in the middle of it is a picture of Tyrell Wellick – the mastermind of the 5/9 hack.
“You have to be fucking kidding me” Darlene says. 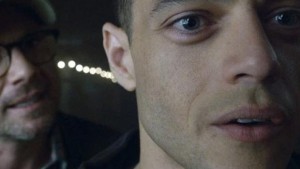 “Why is it so important for you to torment me?” Elliot

Elliot has tried everything to get rid of Mr. Robot. He tried drugs, he tried making friends with him but nothing seems to work. As they argue Elliot realizes that Mr. Robot is actually distracting him from what Tyrell is busy doing. Tyrell is making the final touches to enact Stage 2. Elliot rushes over to stop him and says he is pulling the plug. Tyrell is dumbfounded at Elliot’s behavior. This was his idea after all.
“We were going to be gods together”, Tyrell says. Tyrell has to resort to desperate measures. He pulls a gun on Elliot. The gun Elliot gave him. The gun from the popcorn machine. The gun Mr. Robot said he used to kill Tyrell. But Elliot doesn’t think Tyrell is real. I think many viewers including this one entertained the thought as well.
“He doesn’t exist,” he told Mr. Robot. ”I’m the only one who exists. It’s time to finally take back control. Real control.” 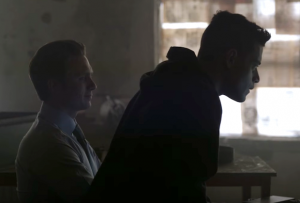 He gambles. He loses. Tyrell shoots him. Elliot is shocked as he sees blood on his hands. He collapses.
“I couldn’t let anyone stop us. Not even us.” Mr. Robot says.

The big surprise is that Tyrell calls Angela. The Dark Army gave Tyrell her number as a safe contact if needed. She seems calm and expected his call.
“Are you with Elliot right now? Tyrell you did what needed to be done” she asks.
Tyrell is in tears for having to shoot his ‘leader’. “I love him”, he says.
“I love him, too.” Angela tells him.

The lights for out again. This time they stay out.

BUT……. just as in last season’s finale there’s a coda.
A car slowly moves through a parking lot. A song is heard. “We got tonight/Who needs tomorrow?”
It’s Kenny Rogers. This is the parking lot to a Fry’s Electronic store. We see palm trees and sunshine so I’m thinking California. The camera closes in on a couple having lunch outside the store. It’s Mobley and Trenton. They’re working at Fry’s. They’re arguing.
“If what I found is real do you know what that means?” Trenton says.
“I know exactly what that means.” Mobley answers.
“It means we could potentially undo this whole thing and put everything back to the way it was!”

Then they are approached by someone. “Excuse me” we hear the voice say.
It’s Leon!!! Ohhhh that Dark Army knows everything! 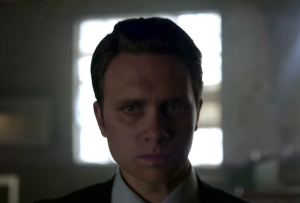 Tyrell recites lines from a poem by William Carlos Williams. “My father used to say that to me all the time — it was the only English he knew. Some silly poem; it meant very much to him. I use it as a reminder. A reminder of him. And a reminder of what I never want to become.”

so much depends
upon

Elliot admired his father. Mr. Robot isn’t a representation of him as much as the dark side of himself.

I like how they took the scene between Mr. Robot and Tyrell from Season 1 and showed it again only this time with Elliot. Seeing Elliot AS Mr. Robot was interesting. First time this has happened on the show.

Red Wheelbarrow BBQ is the name on the take out menu Mr. Robot found the decrypted message on in Episode 11.  In this episode, the Dark Army guy in the hazmat suit was eating food from the same place.  Red Wheelbarrow BBQ may be Sam Esmail’s take of Big Kahuna Burger in Quentin Tarantino films.

What did Whitehorse say to Angela that convinced her to join the team? Is she just putting on another mask? If her end game is destroying E Corp will she now become Elliot’s adversary?

Will Darlene now help Dom? What kind of deal can she cut?  She doesn’t even know Tyrell does she?

Season 2 included some amazing visuals and sequences.  It could have used some editing in my opinion. Maybe they should have stuck with 10 episodes as with Season 1.

Plenty to think about before Season Three. Thanks for joining me on this journey, friends!