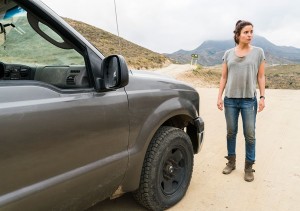 Things are looking great at the Hotel! Life looks good! They even have ice! But things are not so good at La Colonia. People are leaving and Alejandro is losing his composure. But Nick and Luciana make a great couple and there is no question who wears the pants (not Nick).

The episode opened with a daring escape attempt by a man, a woman and their daughter. Escaping La Colonia! Why? What do they know? The man turns out to be one of Alejandro’s scouts, Francesco. They use the old ‘kill a zombie, open them up and smear walker guts all over you’ trick to get through The Wall of zombies protecting La Colonia. But no sooner did they clear that obstacle than they were captured by Marco the Costco gang leader! Apparently, Marco doesn’t know where La Colonia is and wants Francesco to spill the beans! 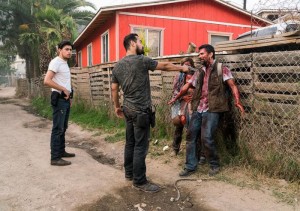 Meanwhile Luciana and Nick are going hot and heavy. Nick’s Spanish has improved greatly since the last episode. Luciana must be a good teacher. When they are informed that Francesco has taken off and not gone to make their usually transaction with the Costco gang for water, Nick volunteers to go. But Alejandro makes a decree that no one is to leave La Colonia. He seems to come a little unhinged. He even questions Luciana’s loyalty but she is dedicated to him and la Colonia. Nick insists that if they don’t make the meet that the gang will come looking for them. Of course, they already are but they don’t know that yet. He arranges with Reynaldo (another scout) to go at night without telling Alejandro or Luciana.

He tries once more to reason with Alejandro but he still refuses to let him go. He shows regret for talking to Luciana the way he did and even refers to Nick as a son but Nick isn’t so easily swayed.

My favorite scene is when he gets in a lovers spat with Luciana and she calls him “gringito” which means ‘little white guy’. “Stop calling me that!” Nick lashes back. 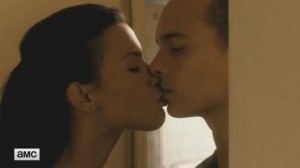 She definitely has the reins in this relationship and Mick seems okay with that. Though he’s still just going to go off on his own against Alejandro and Luciana’s wishes. 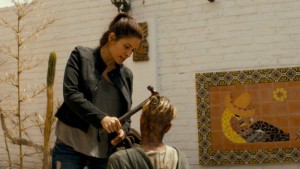 Well, well, well. So Ofelia did take the truck and whole bunch of supplies and headed for a different hotel. A smaller, cozier place called ‘Poco Cielo’ which means ‘a little bit of heaven’. She nicely dispatches with the zombie caretaker of the place with a hammer to the head! When did she get so proficient at killing zombies? Then she heads for the well stocked bar and looks out at the seaside view. 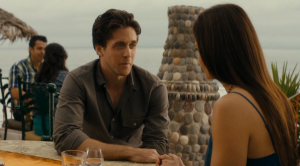 Before you know it, we’re in a flashback. It seems she has been here before with her American boyfriend. This is where he proposes to her and she is reluctant to say yes because she’s worried about leaving her parents. We all know that she didn’t marry this guy and decided to stay with her parents which I’m sure she now regrets. We see another flashback where she speaks to her mother and asks why she chose to marry her father.
“He’s a hard man”, Ofelia says.
“I’m a hard woman”, her mother answers. 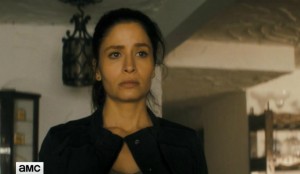 Her mother tells her all about how hard it was for them in their own country and that they wanted something better for her so they brought her to America. Now we know they were probably on the run for the things that her father had done. Her mother says she would always chose her father and her over anything and tells her not to give into fear.

Ofelia sits at a crossroad with one road leading to the USA and the other leading to Mexicali. She kisses her rosary crucifix and heads for the border. Whaaat? So she’s going to go look for her old boyfriend? She won’t get past Tijuana!

Things are going so well at The Hotel that we are treated to a lovely montage showing them starting a garden, fishing off the pier, getting the generator started and playing on the beach. Hector is trying to teach Alicia how to surf when Madison comes along and brings them glasses of water…..with ice! They are living the life! What could go wrong?

“You took my (zombie) daughter from me!” 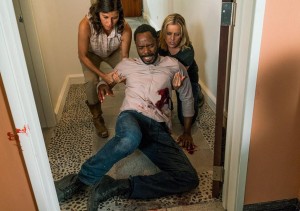 A crazy lady with a knife, that’s what! Back in the hotel there’s a knock at the door and when Strand opens it he’s immediately stabbed in the belly by Ilene, the zombie bride’s mom! So now they need antibiotics and other medical supplies that they don’t have at the hotel. They give Strand a bottle of bourbon to tide him over while Elena drives Madison and Oscar to a little place she knows of where they can get them. Tijuana Costco!!!!! It so happens that Hector’s brother, Elena’s nephew, Antonio, chose to go with the gang rather than stay with them when the zombie apocalypse started happening so Elena has an in.

“Don’t give up on him”, Madison tells Elena, obviously with Nick in mind as well.

Meanwhile, Madison makes a decree! Anyone who commits violence against another person will be exiled from The Hotel! Write it down!

So off they go to Tijuana leaving Stand in Alicia’s capable hands.
“You have excellent bedside manner”, Strand tells Alicia.
Alicia and Strand bond over how neither of them are the kind of people that need things sugar coated. Alicia tells Strand how she basically had to raise herself since Madison was too busy trying to take care of her dad and Nick.
“I’m still not sure she actually sees me,” she says.
“Then make her”, Strand tells her. 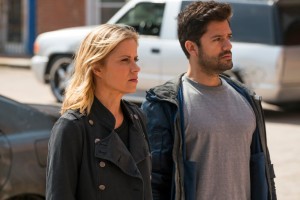 Elena, Madison and Oscar arrive at the Tijuana Costco with an ice chest of fresh fish to trade. The guards only allow Elena and Madison to enter. Then while they wait for Antonio to get them their supplies, they hear loud yelling. Madison asks Elena to translate. ‘American’, “ratty hair’……NICK! Madison is sure they are talking about Nick! So she decides she’s just going to run up to where the yelling is coming from and simply ask them, “Do you mean Nick?” Elena is stunned and annoyed! Madison barges in on Marco interrogating Francesco and his family wanting to know where La Colonia is. Madison just about gets her and Elena killed! The guards drag her out and amazingly they are allowed to leave. Remember when they just about cut off Nick’s hand for stealing a hostess cupcake or something? Marco is getting soft! 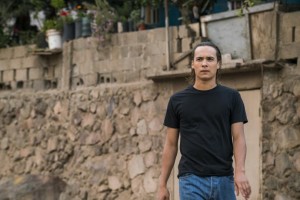 As sundown approaches and Nick prepares to make a nighttime run to the Tijuana Costco we see that he is being watched through binoculars. It’s Marco! They must have got it out of Francesco! It also appears that Nick notices this. It looks like La Colonia is going to come under siege.

As soon as the gang comes back from the supply run, Madison bolts from the van. Alicia asks what happened. Elena tells her that her mother went crazy when she heard some people talking about a ‘ratty haired American’. Then it happens. The giant red neon hotel sign goes on!
“What is she doing now!” a highly irritated Elena says.

Alicia runs to find Madison at the newly working generator. Like some mad scientist she threw the switch and set out a beacon for all to see and gravitate to!
“Turn it off!” Alicia screams.
Madison is sure that they were talking about Nick and that would mean he is only 15 miles away!
“You don’t understand,” Madison says. “Your child is always your child.”
“I’m your child. He chose what’s out there over us!” Alicia says.
“Maybe he changed his mind”, Madison pleads.
“I never changed my mind. I’m here. Why isn’t that enough?” poor Alicia tells Madison. 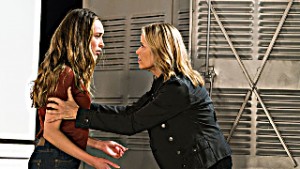 This must have got to Madison because the next shot we see the hotel from a distance and we see the big neon sign go off. But we also see the back of someone’s head. Someone has seen the beacon of hope! The camera swings around to reveal…..Sad Travis! Looking sad as ever. He starts for the hotel. No sign of Crazy Chris. Could Travis have….? Not a chance! Crazy Chris is out there somewhere with his bro dudes.

Antonio tells Elena not to come back to the Costco because ‘we may not be there much longer.’ Where they going? La Colonia perhaps?

Hector asks Alicia if she misses her brother. She answers “I miss who he was. I don’t know if I miss who he is.” Fair enough.

There are a lot of people at the hotel! It’s a great place to hole up. Unfortunately dumb Madison may have just blown it for them all! I get that she’s a mom and her kid is out there and all but dammit! This is the zombie apocalypse! Not only that but you’re in Mexico! They don’t play down there. And Alicia is right. Nick chose to leave. 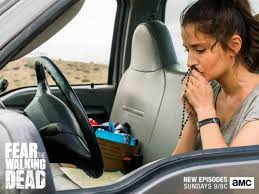 I don’t get these people who just decide to take off on their own. It makes no sense. Ofelia. Where you going? To do what? Nick. You got lucky. You found a hot woman who likes ‘little white guys’. Madison. Take care of the mess you have on your hands. Nick can take care of himself.

Things are heating up nicely! In the homestretch! I think we’re in for some good action in these last four episodes.