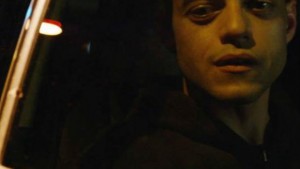 Well, I have to say, after watching the best episode of the season in Episode 10 which culminated in one of the best sequences of television of the year, I was disappointed in the penultimate episode of the season. I just read a reviewer refer to it as ‘Twin Peaks edition”. It certainly was odd and slow churning. Mobley and Trenton are still missing. We don’t learn the fate of Cisco and Darlene. That season finale is going to run very long I think. 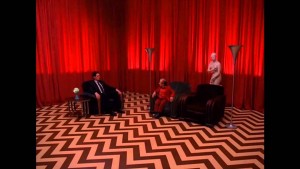 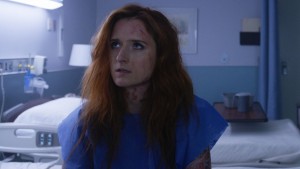 Dom is in the hospital and pretty shaken up.
“The blood on face isn’t mine”, she tells the doctor.
She is upset with her boss for releasing Cisco’s face to the press, exposing him to The Dark Army. Her boss is as dismissive as ever but seems to be finally starting to come over to Dom’s side. He tells her that China just loaned E Corp 2 trillion dollars, interest free.
“We can’t let them get away with this, Santiago” Dom says.
“They’re going to get away with it. This is the miracle the world has been looking for.”
The FBI will not want to investigate this any further. He tells her to go home.

Once she gets home she has a very depressing conversation with her computer, Alexa.
‘Alexa, are we friends?’, ‘Alexa, what’s your favorite color?’, Alexa, do you love me?’
“That’s not the kind of thing I am capable of”, Alexa tells her. 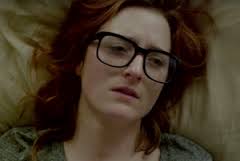 Now take a nap, Dom. You’re done for this episode.

Now that E Corp has the 2 Trillion dollar loan from China Price wants to create Ecoin!
The government official he is talking with is outraged, “You can’t just make up your own currency!”. Price sets him straight. It’s happening. 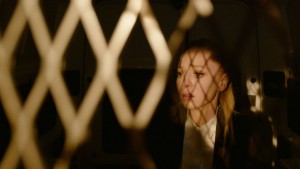 She finds herself in the back of a van being driven a silent couple who apparently like listening to the soundtrack of Back To The Future. “A lot of people are going to know that I am missing”, Angela tells them. The driver turns up the music. Very surreal. Obviously not the Feds. They drive all night and end up pulling into the garage of a normal looking home in a residential neighborhood. The Davy Crockett Theme is now playing on the radio. What 50s channel are they listening to? Angela enters the house and is led into a room with a large aquarium, a computer on a table, a red phone and a paperback copy of Lolita. A little girl enters the room and starts asking Angela some very personal questions. “We don’t have much time. Let’s get started”, she tells Angela.
Angela wants to know what’s going on. “Do you ever cry during sex?” ‘Are you a giraffe or a seagull?” Angela refuses to answer.
“If you don’t answer I’ll be punished”, and the little girl lifts her shirt to show the bruises on her back. Angela is taken aback and starts to answer her questions. 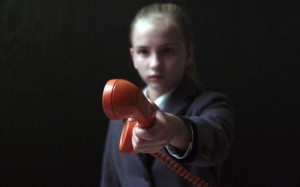 After some time, the door opens and Whiterose walks in. Angela complains that that she has been in that room for hours and they’re wasting her time.
“My time is much more valuable then your time”, Whiterose says, “I have allotted 24 minutes for this meeting so let’s begin.”
Whiterose is concerned about the info that Angela was going to turn over to the FBI. She insinuates that the deaths of Angela and Elliot’s parents were part of a larger good. 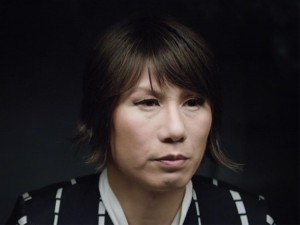 Angela goes to the home of her lawyer friend. “I need you to forget about that voicemail I sent you”, Angela tells her. Then she leans in close to her and whispers in her ear, “Don’t call me anymore.” The lawyer is very confused. I would be too. Freaky.

Joanna is shown on her henchman’s phone where the calls have been coming from. She seems very happy about it. “Ma’am, what do you want to do?” her henchman asks.
“You know all the gifts he sent? This is the greatest we ever received.” She tells him.
The season finale has a lot of explaining to do. 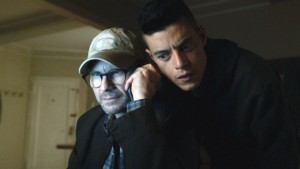 The episode began with Elliot in bed. “Angela’s right, we can’t beat them. But maybe we can keep them from winning.” He wonders where Mr. Robot has gone. He hasn’t seen him in awhile. “What if I could be the silent observer?” he asks himself. Then he puts himself in a trance by repeating this mantra, “Mind awake, body asleep”.

He comes out of it for the last section of the episode. “How long have I been asleep for?” he asks the audience. Too long I’d answer if he could hear me.

He sees Mr. Robot enter the apartment and pick up the mail. It seems he has become the observer and they do not acknowledge each other. Mr. R goes about deciphering a message that has been sent on a restaurant take out menu. Elliot can hear Mr. R’s thoughts. Elliot asks us if we can hear them, too. The message turns out to be a phone number. Mr. R calls it and a disguised voice says to meet at “25th and 8th Avenue. There will be a cab waiting.” They leave the apartment. 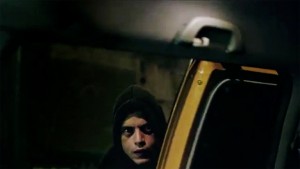 Elliot walks along the street “I have to remember I’m not following him. I AM him. What I should be asking is ‘Where am I going?” He finds the cab waiting as the voice had said. He approaches it and opens the door. The cabbie asks, “Elliot? You Elliot?” Elliot says yes and cautiously gets in the cab. “What address?” the cabbie asks. Elliot has no idea. The cabbie gets excited, speaking in another language. Then the other door opens. Someone gets in. It’s Tyrell. “Chambers and Church.” The cab starts to go.

Elliot’s eyes are open wide in disbelief. Since he can’t believe his eyes he asks, “What am I NOT seeing?” Elliot yells at the cabbie, “Do you see him? Turn around! Do you see someone sitting next to me?” Tyrell tries to calm him down but Elliot is beside himself. He has no idea what is real and not real anymore. The cabbie kicks them both out of the cab.

“Have you forgotten everything?” Tyrell asks, “The Dark Army says that Stage 2 is written. It worked, Elliot. It’s up to us now. Let me show you.”

They start walking off down the dark street. “Louie, I think this is the beginning of a beautiful friendship.” Tyrell says echoing the final line from Casablanca.

The season has been ambitious. I have not always been able to follow along. I like dark but every character just seems so depressed this year it’s hard to stay focused. I think there has been some over indulgence here and there which some people get off on but others just find distracting and not necessary to the plot such as it is.

I am prepared for the finale to be more of the same. A few answers that lead to more questions. Is Elliot dreaming? Is Tyrell really alive or just another one of Elliot’s personalities? Expect anything.