We’re getting close to the end and the tension is building nicely. Episode 10 is my favorite episode of the season so far. I’ll admit I have sometimes gotten lost in the thickness of the plot this season. You really have to pay attention and even then, I’m not quite sure of what is happening. But this episode moves fast and tightens the screws with each scene. It builds to a beautifully directed and edited sequence to close the episode. 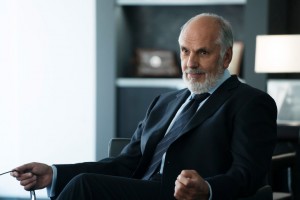 “Politics is for puppets.”   Phillip Price

Colby is in Price’s office and Price asks Colby for a little favor. He wants Colby to use his influence with an advisor to President Obama to convince him to allow the UN ambassador to abstain in a vote to allow China to annex the Congo. Even Colby is like, “what the fuh!” Colby won’t do it and asks Price, “Why do you do it? All of it?”

“I have to be the most powerful man in the room. And I am. Except for one, maybe two.”

Price compares his goals in life to that of God. He is a seriously scary dude.

First off, at the end of EP9 Joanna says ‘Hello Ollie’ to Elliot. I ran it back a few times just to make sure what she said. Why is she calling him Ollie? I dug up the info from the webs! There is a scene from the Season One finale where Elliot runs into Joanna in the street and Elliot tells her his name is ‘Ollie’. He also says, “You’ve got to help me get out of this. There’s something about her. I feel like she can hear us.” He says the same thing in the scene with her in this episode.

Joanna was lying in wait for Elliot. She takes him back to her lair and asks him if he knows where Tyrell is. Of course he’s not going to say ‘I think I killed him’ so he says he doesn’t know. She doesn’t believe him. But she hands him the cell phone that, she and I assume all of us, thought Tyrell had sent her so they could communicate. She wants his help to finds out the location of the person who’s been calling but not speaking.

“Sorry. I can’t help you.” Elliot tells her.

Then Joanna walks up to him, gets real close and whispers in his ear, “Do you really want to say no to me?” then she slinks away out of frame. 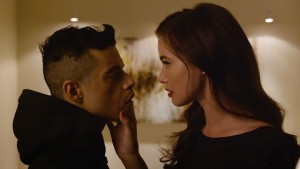 Apparently he didn’t because next thing you know, Elliot and Mr. R are being chauffeured by Joanna’s henchman. Her looks out the window at all the unpicked up garbage and long lines at ATMs and he questions what he’s done. “Maybe wars aren’t meant to be won. Maybe they’re meant to be continuous.”

Elliot makes the henchman stop at the store so he can buy some hardware and while in the store the cell phone rings.  Elliot picks it up and he hears heavy breathing. Is it Tyrell? It can’t be. Unless Mr. R lied to him. And by the way where is Mr. R? Nowhere to be imagined.

Once back in his apartment Elliot works his magic and finds the location of where the calls are coming from. The henchman recognizes the location and his face goes white. 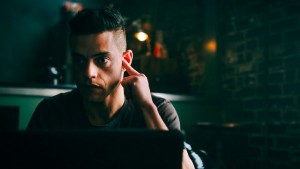 “Trust me. He wouldn’t be calling from THAT house.”  the henchman says.

While this is happening Elliot gets a call from ‘Claudia Kincaid’ which is his code name for Angela.  She needs to meet him.

Ok. So Darlene opens the door and its Cisco dragging some guy into the apartment.

It’s Vincent. Do we know who this is? Apparently, he helped pull off the ‘Capital Hill’ job. Cisco found him at the smart home. He’s been pretty badly beat up and needs medical attention. Darlene is hesitant at first, ‘he’s seen my face’ she says, but Cisco is insistent they take him to the hospital.  He lays into her. He wants her to give up this crusade. They’re in over their heads.

Damn. It worked. They take Vincent to the ER. While they wait Darlene tells Cisco this weird story from her childhood about her being abducted as a child while at Coney Island. She was taken by a woman with ‘pink smeared lipstick’ who made her feel like a princess. When she was found she wished she could have stayed with the woman instead of going back to her messed up home. Run Cisco!

They decide to go find somewhere to eat and end up at Lupe’s Café. They actually start to relax and seem like two people on a date, smiling and laughing. They actually believe the FBI has no clue about who they are. 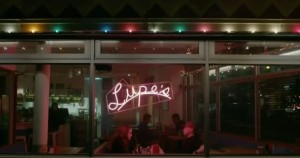 The FBI is swarming all over the smart house. They think Susan Jacobs is missing. They get an eyewitness rendering of someone who was seen entering the house.  It matches with a suspect from another case. Dom recognizes it and goes to her boss who, of course, thinks she’s off base. He seems way too dismissive of her theories. He must be in cahoots with The Dark Army somehow. 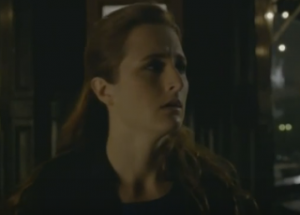 They find enough to lead them to Cisco’s apartment where Dom finds a picture ID of Cisco.

They track him to the hospital and question the nurse at reception. She confirms he was there with a woman and that they left to get something to eat. Again, Dom’s boss thinks they won’t come back and decides to leave.  But Dom knows better.

Elliot and Angela meet on the subway. Angela asks him, “Why did you start F Society?”

Elliot seems taken aback. “I didn’t want to involve you” he tells her.

“An FBI agent came to my place.”

“Sooner or later, Elliot, this will all come back to you.” 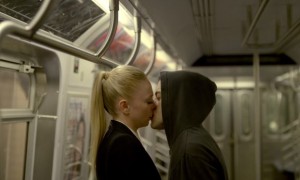 He gets up to exit the train.  She stands. He walks over to her. They hug and then he leans in close and they kiss. “I don’t want to leave her” Elliot says to us. But he does get off the train. As soon as he does two figures approach Angela. The Feds?

This is a wonderful scene. Two old friends who really love each other facing a very possible goodbye forever moment. Rami Malek and Portia Doubleday deliver the smoldering hot.

This brings us to that incredible closing scene. The sequence really begins with about 15 minutes to go. The scenes between Darlene and Cisco at the diner, Dom finding Cisco’s apartment then tracking him to the hospital and then taking off on her own looking for them and Elliot and Angela on the train. The editing is amazing as is the music playing underneath and the performances. Sam Esmail puts together his finest piece of direction here. It leads to Dom coming across Lupe’s Café and seeing Darlene and Cisco in the window. She calls it in but doesn’t wait for back up.

The shot stays wide as Dom approaches the diner and goes in.  You see her confront Darlene and Cisco. In the corner of the shot you see two men on a motorcycle circle around and stop in front of the diner. The passenger gets off and approaches the diner.  He’s holding a machine gun. He goes up to the window and starts shooting, shattering the glass. Dome stands up and returns fire, hitting the assassin. The assassin stumbles around. His partner takes off. Back up arrives, NYPD cars, sirens blaring. The assassin shoots himself in the head just like the wounded assailant Dom shot in China. This is a Dark Army hit alright. Dom runs out of the diner holding up her badge. She walks to the front of the frame. You can see blood splatter on her face. Wow.

An amazing sequence. This is as good as it gets. I have to think the blood on her face belongs to Cisco. I can’t imagine they’d finish off Darlene. Not yet anyway. This was the strongest episode of the season. The style was balanced with the substance and all the stores converged nicely.

“Can you believe that cocksucker is actually running this time?” Colby says. “The things I have on him.” Terry Colby says about Donald Trump!

Joanna Wellick meticulously dressing for her encounter with Elliot.  Does she always spend this much time and thought before leaving the house? What made this so special?

“No one in the world uses fax anymore… except for cops.” Elliot

Mac Quayle’s music for the show has usually been overshadowed by the great song picks Sam Esmail uses but in this episode it was front and center especially in that thrilling final sequence.

Dom running down the street as one of the now common brownouts occurs. Really nice shot.

“I feel like she can see me,” Mr. Robot says about Joanna Wellick. Can she? 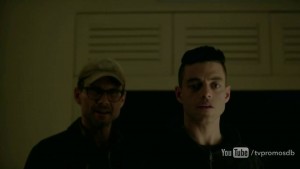 92 East 82nd Street is the location where the calls have been coming from. If it’s not Tyrell then who is it?