FEAR THE WALKING DEAD RECAP S2 EP10 DO NOT DISTURB 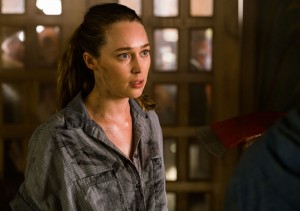 The cold open was a happy event! Who doesn’t like a wedding? We flashback to happier times at The Rosarito Hotel. It seems like a Mexican-American joint wedding party. The bride and groom are dancing and happy but the bride’s parents are concerned. They’ve heard that the border is being shut down due to the virus that has broken out recently. The bride’s parents and American and want to get their friends and themselves across the border before it’s too late. They alert the hotel wedding planner, Elena but before they can bolt the DJ calls the father of the bride to the dance floor to dance with his lovely daughter! The mother says ‘one more dance and we’re outta here!’. But as fate would have it, the father collapses from a heart attack. I know the first instinct is to do CPR but…..you guessed it. Dad reanimates and bites his daughter’s face off! Mayhem ensues.

Elena and one of the waiters, who we later learn is her nephew, Hector, run out of the room and lock the door and the entire wedding party in the room. Shades of Father Gabriel. 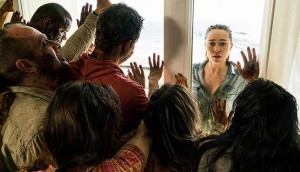 In the present, Alicia is still trapped in a room. She does have a knife and looks pretty handy with it, too. She eventually makes a play to escape but the hallways are filled with walkers. She pries an elevator door open and jumps on the cable as walkers reach in to get her. They fall into the shaft and on to the elevator below. Alicia starts climbing to reach the next open door and finds some help to pull her in. It’s Elena with an ax. She’s been separated from Hector and is worried. They have been hold up in that tower since the outbreak with plenty of supplies. They have the keys to the hotel and so found a way to herd the dead on to floors and into rooms as needed. Once Alicia convinces Elena that they need to work together to find Hector and also to help Madison they lure the walkers from the stairway and herd them into a room. Alicia then hops from one balcony to the one of the next room. Easy peasy! They get downstairs and find the doors to the bar have been barricaded from the outside. No sign of Madison or Strand but lo and behold! Some members of the wedding party are still alive! And plenty mad at Elena! They have Hector and want the keys to the hotel in exchange. Alicia tells Elena to give them the keys and once they let Hector go Alicia opens the doors to the bar and out come the walkers towards the groom, the mother of the bride and assorted wedding party guests. Alicia, Elena and Hector make a run for it while being chased by walkers. They go down into an underground labyrinth and come to a lock door. Just when all seems lost the door opens and Madison and Strand pull them into safety. 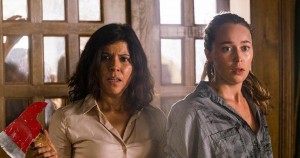 How the hell did they get out of that bar and down in the underground tunnel? I guess we’ll find out next week based on the previews. And where the hell is Ofelia? Why do people just wander off? This is the end of the world people. You can’t do it alone! 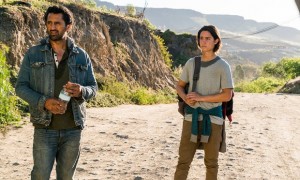 Meanwhile, Crazy Chris and Sad Travis are walking down a lonely Mexican road. Travis’ feet are messed up from running around without shoes a few episodes back and he’s limping badly. They come across a little town and Travis tries to hot wire a car while he allows Chris to scout for food in a nearby tacqueria. He eyes a big can of beans when he hears voices from the next room. Then a group of walkers come in and try to place an order. Chris handles them pretty well even saving one of the guys who walks out from the next room like an idiot. Chris takes off and hops in the car and Travis guns it down the road. Eventually, Travis decides the dead of night is the best time to teach Chris how to drive and lets him take the wheel. At one point, Chris sees a walker walking in the stretch of highway in front of him and hits the gas and starts to veer to hit it but Travis stirs and Chris thinks twice about it. 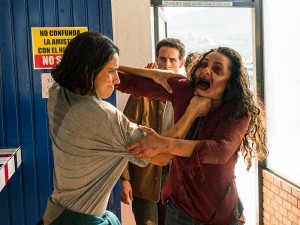 The car runs out of gas and so they decide to start a fire in the middle of a wide open field! Come on! Travis tells Chris that things will go back to the way it used to be. Travis is way too naïve. I know he’s trying to protect his son but you’ve got to face facts, too. Then they see car lights appear. They hide. It’s the three scavengers from the tacqueria. They convince Travis and Chris that they mean no harm and they all settle around a camp fire and share food. The three guys set up a perimeter at least, using tin cans as a makeshift alarms system. They’re three young guys from San Diego who just came down to party in Tijuana. Brandon is the leader and his two pals are Derek and ‘Baby James’ (a nod to James Taylor?) They were very impressed by Chris’ zombie killing skills.
“Where’d you learn to kill?” Brandon asks.
“It just comes to him.” Travis answers.
“How many have you killed?” Brandon prods.
“I don’t keep count.” Travis sheepishly says.
“I bet the kid does.”
“17.” Chris quickly chimes in.
“That’s a healthy number”. 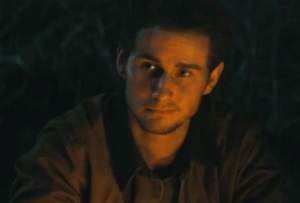 Travis is thinking it’s ‘unhealthy’. When Travis and Chris are alone in their tent Travis tells him that they’ll go their own way in the morning but Chris doesn’t want to he wants to stay with the ‘bro-migos’. Travis knows these guys are exactly the wrong influence he wants for his son. But Chris thinks they’re ‘good people’. Besides they think he is a cool dude!
“I think you’re dangerous.” Travis tells him.
“Maybe that’s what it takes.” Chris tells him.

Chris is right I the respect that you have to be willing to defend yourself in the new dark world but Chris seems too eager to kill.

The next morning with Chris sandwiched between Brandon and Derek inside the truck and Travis in the flatbed with Baby James, the boys reminisce about wild times and how ‘the end times made us gods!”. Travis sits in sickly silence wondering how in the hell is he going to get them away from these punks. Then they come across a farm and decide to do some scavenging. It’s a big spread and away from the highway. Travis tells Chris they should stay there and start over. Chris doesn’t want to hear it. He goes with the boys into the barn where they find it filled with chickens. “Protein!”

Travis comes across a makeshift graveyard. All the markers have the current date as the date of death – He puts it together that whoever buried these people is till alive and lurking about. He goes into the barn and urges them to leave but they’re having too much fun going all ‘Rocky’ chasing those chickens. Then the hammer drops. The farm owner walks in pointing a shotgun and telling them to leave. No matter how hard Travis tries to diffuse the situation it all goes bad. Baby James, holding a chicken, snaps its neck which triggers the farmer to shoot him in the leg. Then another shot is fired, putting the farmer down. Travis looks behind him to see it was Chris that pulled the trigger that killed this innocent non walker. He kneels down besides the farmer but there’s nothing he can do. Chris reaches out his hand to Travis to help him up but Travis just looks at him with disgust and refuses to take his hand. 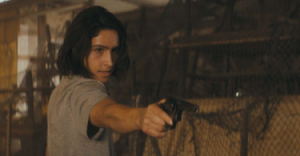 Look, Chris is a sociopath. He’s nuts. Travis needs to cut bait and hightail it up the road to find Madison. I don’t see how Travis turns this kid around. He’s got a taste for blood and not just walker blood. Now he’s killed a survivor, a living person. The line has been crossed. 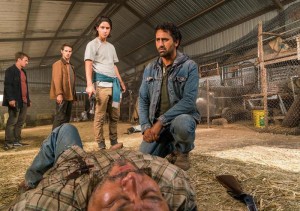 The episode title ‘Do Not Disturb’ stems from the DND signs put on the rooms where they are walkers inside. Elena and Hector were doing this after luring them in to clear a floor.

Alicia is turning out to be pretty badass!

The actress that played the bride in the cold open is Shuyler Fiske, Sissy Spacek’s daughter. 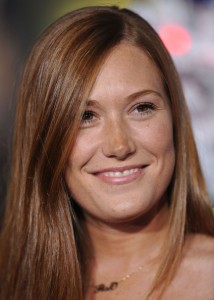