The episode is titled “Los Muertos” which means ‘The Dead”. What is significant about ‘the dead’ in this particular episode? The Mexican people view death a little differently than we do here in the USA. They celebrate the dead every year on November 1st. They call that day ‘Dia de Los Muertos” or ‘The Day of the Dead’. It is a time to pray for and remember friends and family that have died. The Catholics call this day ‘All Saints Day’. 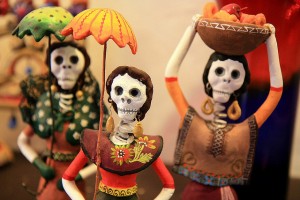 The dead very much remain a part of their lives. There is a respect for the dead and they feel the dead protect them. 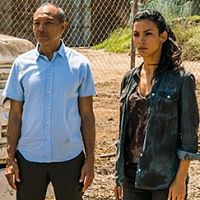 Nick wakes up in the infirmary next to some old woman who’s coughing up blood. Nice alarm clock. He wanders out and finds no one around. Then he sees a little girl looking very scared standing all by herself looking intently at something. The people of ‘Colonia’ have gathered for some sort of ritual. The little girl’s father has become sick and Alejandro and Luciana and the rest of the community are saying goodbye. There is a bus that acts as a tunnel from Colonia to the outside. They are sending him through where he will be sacrificed to the dead that gather at ‘The Wall”. The people chant something as this happens, “De la muerte venimos … y hasta la muerte entregamos nosotros mismos.”

Luciana takes him along on a supply run and tells him that the dead at The Wall protect them. She also says that the people have faith in Alejandro because he had been bitten but didn’t die. Nick calls BS. You get bit you die! 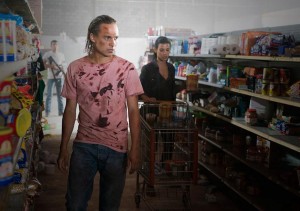 They get to what looks like the Tijuana Costco which is being guarded by an armed gang. They trade drugs for supplies. The gang leader only allows one cart this time even though they had allowed two before. Price gouging in the zombie apocalypse cannot be argued with. Ofelia and Nick go shopping and Nick notices the gang leader looking after a woman who seems to be ailing. As they are leaving with their one cart the guards run after Nick and jump him. He broke the rules. He had something in his back pocket! They are prepared to kill him over this infraction but Nick is a quick thinker and bargains with them. He can tell that the woman is going through withdrawals and, with Luciana translating, determines that the woman is the gang leader’s sister. He negotiates another cart of water in return for a continuing supply of oxycontin. It works. Luciana is both impressed and pissed that he took such a risk and endangering the communities supplies. Once back at the compound we see that Nick had taken some sweets for the little girl that lost her father earlier in the day. 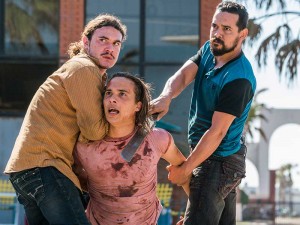 Alejandro meets with Nick and yells at him for his carelessness but sees that he can be a valuable asset and offers to let him stay with the colony. He takes his shirt off and Nick sees he has a major chunk of his shoulder missing. It looks like a walker attacked him. But how could he be alive? This goes against all logic to date about walker bites being a death sentence. What is in the salsa in this place? 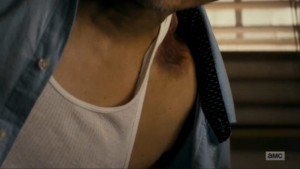 Alejandro holds a prayer meeting. He’s like the Mexican Jim Jones or something. He believes that this is a test. He believes that they are the chosen people, that they have been chosen to ‘outlast death’. Well, if you survive a walker bit you would feel that you were special and everyone else would think the same thing. It makes sense. He then says in English the words that everyone was chanting earlier in Spanish; “From death we come and to death we deliver ourselves!” Then the entire room starts the chant and repeating it. “De la muerte venimos … y hasta la muerte entregamos nosotros mismos.” Nick even starts mouthing it. This is a cult and Nick seems to becoming indoctrinated. 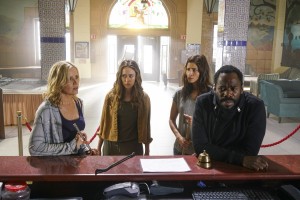 Apparently this group have been looking everywhere for Nick, Travis and Chris without any luck. Strand and Alicia convince Madison to go back to the Abigail where they have supplies and water. But when they get there the boat is gone! Strand figures the military probably took it. So now they need shelter and happen upon a huge hotel. They push in the door which had been barricaded and determine that the building is clear. I, myself, would not assume that, but, that’s just me. Alicia wants to splinter off with Ofelia and go room to room looking for supplies. Madison is dead set against it but Alicia goes anyway. “It’s me and you now whether you like it or not” Alicia tells her mother. Madison is broken-hearted about Nick. Strand decides to cheer her up. They find the bar and he starts making martinis. They sit at the bar and get drunk eventually opening a bottle of tequila. 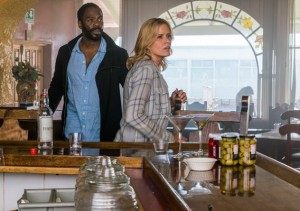 Alicia and Ofelia go into one room and find someone who hung himself in the shower and is now a zombie. They find plenty of supplies especially in the filled refrigerators. Ofelia is sad about losing her father and feels alone. “We’re you’re family now” Alicia tells her. “Family is family” Ofelia responds. Hey, Ofelia! She’s just trying to be nice!

There is till hot water in the building so they decide to take showers but when Alicia comes out Ofelia is gone. Great! Who are these people that they think they are better off just going off on their own? Alicia leaves the room looking for her and opens the stairwell door only to find like a hundred walkers! Bloody hell! She returns to the room and sees a body fall from a higher floor. She goes to the balcony and sees zombies falling over the rails and landing below only to get up and start moving inside where Strand and Madison are. How did these zombies know it was happy hour? 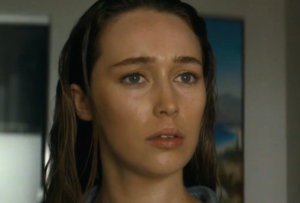 Meanwhile Madison and Strand are loaded! Madison thinks she’ll never see Nick again and reveals to Strand that her husband ha d a darkness that seems to have been passed on to her son. He did die in a car accident as she had told Nick in rehab but it was because he veered into oncoming traffic. Suicide. Madison starts doing shots of tequila then throwing the glass against the wall. Strand moves to the piano and for a moment I think it will be revealed that he can actually play the piano but then he starts banging on it and you realize, no, he can’t. They are just making noise which is drawing all the zombies! Haven’t they learned anything! So here come the zombies looking for some happy hour appetizers and Strand and Madison get trapped behind the bar. Why don’t they have weapons? 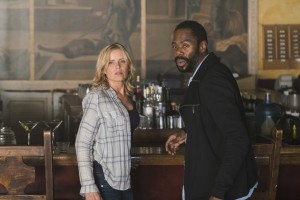 Nick asks Luciana why she’s taking him on the supply run and she tells him ‘because no one will miss him.” Nick asks her ‘Who will miss you?”
“The only one who would miss me is already missing?”
Does that mean he’s alive but she doesn’t know where he is? Hmm, I see a possible love triangle in the future.

“You leave them alone they head straight towards death”, Madison to Strand referring to her husband and son.

“Every so often the ocean washes red. The coast fills with foam and trash. The sand becomes like poison, and burns the water and the land. Washing it clean.” Luciana explaining to Nick why the sick are sacrificed to The Wall. Whaaaaat?

I’m a little disappointed in Strand and Madison. They should have known better than to pick a forty story hotel resort to relax and feel safe in. I mean it’s a cool place with a full bar but the service looks terrible!

Next week we get to see Sad Travis and Crazy Chris. I’m sure we’re all looking forward to that!