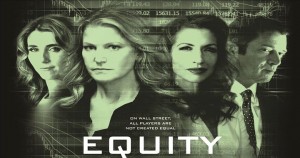 Films about Wall Street have usually been testosterone driven, think Wall Street (1987), The Wolf of Wall Street (2013), Margin Call (2011), Boiler Room (2000) and so on. So it is refreshing to see a ‘wall street’ film whose main characters are women. Equity was written by Amy Fox, directed by Meera Menon and produced by two of it’s lead actors, Alysia Reiner and Sarah Megan Thomas. 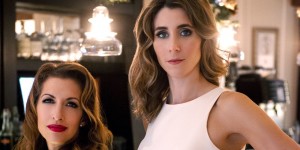 And it’s lead character, Naomi Bishop, is played by Anna Gunn (Deadwood, Breaking Bad). This film is estrogen driven without a doubt! Naomi Bishop’s “I like money” speech could be likened to Gordon Gekko’s “Greed is good” speech in Wall Street. There is no shame in her game. 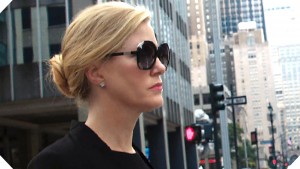 Equity presents itself as every other movie. It is unassuming, tells it’s story and makes no excuses for it’s characters. This is a story from a woman’s point of view and it says women can be every bit as ambitious and cut throat as men. 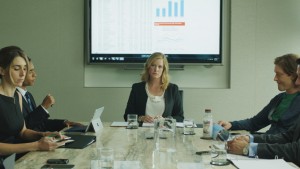 Naomi Bishop is an investment banker who has been at the top of her game, that is, up until the beginning of the film. We see a company she championed tank when it goes public. You’re only as good as your last victory and she just had a major flop. She is passed over again for a promotion and it is made clear her standing with the firm is in question. Naomi needs to come up with something big to get her back on top. She pitches an up and coming social network company called Cachet, run by a cocky young Brit. Cachet is a company that guarantees complete privacy for it’s users but Naomi and everyone else around her, there is no such guarantee. 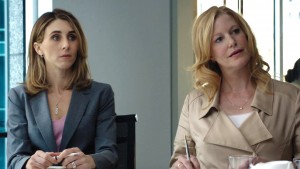 In her boss’s office, he has a game of Jenga on his desk which he plays as he discusses business. That is how to best describe the plot. There are so many moving parts and one misstep can cause the whole deal to crumble. Naomi is focused and confident but she sometimes comes off too hard or at least that’s the knock on her. Her assistant, Erin (Sarah Megan Thomas), communicates better with the young CEO who takes a fancy to her. Naomi sees this and feels threatened. Erin has ambitions of her own. She is newly pregnant and when she asks Naomi for help getting a raise Naomi shuts her down.

Her boyfriend, Michael (James Purefoy), a co-worker, keeps asking her questions about the deal which makes her uncomfortable. He may be trying to undercut her for his own gain.
Sam (Alysia Reiner), old college friend of Bishop’s who is now an assistant DA, renews their friendship only to get info on her boyfriend. He is suspected of insider trading.

The pieces are all in place for a taut thriller that doesn’t quite build up to enough of a climax. Things play out as expected but there doesn’t seem to be a third act. It may be realistic but not very ‘thrilling’. What you get is a well told, well acted, intriguing story that I just wish dug deeper. 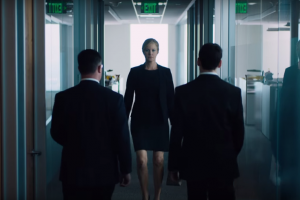 The performances are all fine especially Ann Gunn and James Purefoy. Gunn who played the put upon wife of Walter White in Breaking Bad gets to break bad herself here. She is a touch cookie who will chew you out if you hand her a cookie with only three chocolate chips! She holds your attention and is the glue that holds the film together. Purefoy is a charmer who you want to believe is a good guy but you’re just as attracted to his sleaziness. Someone referred to him as an “homme fetale’. I like that. 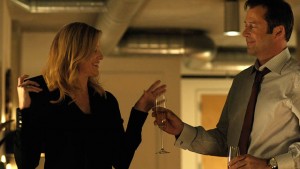 Near the beginning of the film, Naomi speaks to a room of women about finding success in the business world. She tells them, “I’m so glad we can sit here, as women, and talk about ambition.” Equity definitely takes a big step in starting that conversation