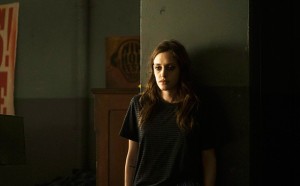 “What I’m about to tell you is top secret. A conspiracy bigger than all of us. There’s a powerful group of people out there that are secretly running the world. I’m talking about the guys no one knows about. The guys that are invisible. The top 1% of the top 1%…”
Darlene [reading Elliot’s words]

Well if you wanted more action and less mind games you got your wish. Things got real tonight! I also got what I wanted; More Darlene! With Elliot in prison (?), Darlene has been the leader and the face (she dons the mask for an F Society video) of the movement.
But though she has proven a tactful and capable leader she is increasingly getting in over her head and the realization becomes clear in this episode.

I have to say I didn’t miss seeing Joanna Wellick in this episode. I don’t really need to see her again unless Tyrell returns. There was no Elliot in this episode either which may be the first time in 18 episodes that this has happened. That’s fine. He needs a breather. He’s been busy. I’m sure Rami Malek enjoyed some well deserved R & R.

Mobley and Trenton meet cute in Ron’s Coffee Shop. They were actually flirting by making fun of each other for the type of phones they had. They even race to see who could get on line first. Mobley wins. “Iphone sucks.” Trenton says. They’re both there to meet someone and lo and behold Darlene shows up! They both thought they were going to meet Elliot but Elliot couldn’t make it so they got the second in command. And so began the first meeting of F Society. No minutes were taken.

Who knew Angela was a karaoke queen? Angela was on a date and being charming as ever when she ran into one of her dad’s friends at the bar. He was friendly at first but then turned hostile by slamming her for working at E Corp, the same corporation responsible for her mother’s death. Angela is mortified and turns to walk away but then stops and walks back to the guy.
“You’re a plumber, right, Steve? You’ve had, what, 60 years at life? And that’s the best you can come up with. Literally cleaning shit for a living. I’m 27, and I’ve got a six figure salary at the biggest conglomerate in history. And I’m just getting started.”
Mic drop.

Then she takes the stage and does a sick version of ‘Everybody Wants To Rule The World’. It was kind of a nightmarish version sung by an ice queen. 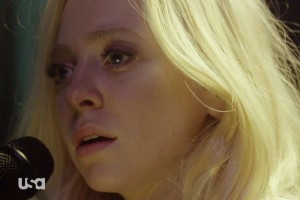 Back at the bar she gets hit on by an older, nicely dressed gentleman who looks completely out of place in this bar.
“You really have a desire to rule the world?”
“My desire goes way beyond that” 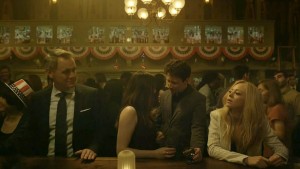 He tries to go back to her friends but Angela gets him to stay with her. How could he resist? Was he the reason she was there in the first place? Does he work for E Corp? The actor is Mark Moses (Desperate Housewives, Mad Men) so I’m thinking this is the beginning of a bigger story arc. Hey! What happened to her date? 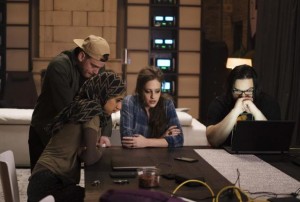 We pick up where we left off last week. The F Society Team learn that the FBI is going to have a conference call to discuss the 5/9 hack Investigation. They tape what is said and use it to make an F Society video (Darlene stepping in for Elliot) using audio from the conference call discussing the warrant less monitoring of millions. They also learn that they have 16 suspects with 1 dead (Romero). Mobley freaks out. He’s all for taking off but Darlene and Cisco won’t have it.

Things take a turn when Susan Jacobs (E Corp General Counsel) comes home unexpectedly and the Team has to subdue her and tie her up. No sooner does this happen then Trenton falls for the old ‘have to go to the bathroom’ trick. Trenton unties Jacobs who tries to jump Trenton and ends up slamming her head against the wall. They decide not to take her to the hospital until they can ‘own’ her which means going through her email and computer looking for some leverage. Once they found something Darlene goes to have a chat with Jacobs. 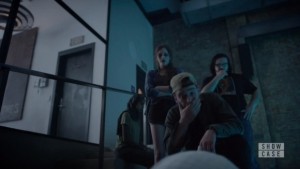 This is where the worm turns.

Darlene: The first time I saw you, I was four. I still remember. On the news, in the courtroom, when they cleared E Corp of all the bullshit they put my family through. And you were in the back, behind a sea of suits. And you laughed. It was so quick, no one even noticed. No one but me. Four year old little me. So… I’m happy I get to look you in the eye. I’ve taken down your company, I’ve taken over your home, and now, I have you.

Susan: OK. So you got me. Where do we go from here? I’m sure we can figure something out.
Darlene: I already have.

Darlene then zaps here with a stun gun and Jacobs falls into the pool. Dead. 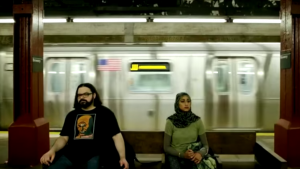 “She had a heart condition. There were plenty of emails. You didn’t read them?” Mobley stammers. Darlene read them which is why she used the stun gun. Darlene intended to kill Jacobs. Later on she tells Cisco, “I didn’t know I could do that.” But she’s crossed a line and there’s no going back. The house is burned. Mobley tells Trenton to leave town as that’s what he’s planning on doing. They’re both paranoid as hell. Trenton tells her father maybe they should move but that’s not going to happen. There’s a noise outside. She looks out and sees a car slowly moving down the street then accelerating out of sight. Mobley actually goes back to his apartment to pack when there’s a knock at the door. FBI.

Darlene and Cisco take Jacobs’ body to the pet crematorium where they have to take it out of the body bag they brought it in and hoist it into the fires.

“This is some traumatizing shit, you know that?” Cisco tells her.

Mobley ends up in an interrogation room with DiPierro. She does all the talking. She offers condolences for Romero. She shows him the ‘End Of The World” flier with DJ Mobley advertised on it. She’s looking for help finding Terrell. She can offer immunity.
“Lawyer.” Mobley says.

DiPierro’s supervisor tells her to cut him loose, they don’t have anything on him.
Mobley texts Trenton to meet them at the place they met then wipes the data from his phone and dumps it. Trenton is shown waiting for him and texting him that she’s been waiting for 2 hours. But she’s texting a phone Mobley no longer has.

Oh and Angela’s karaoke date? An undercover FBI agent. “She’s stone cold and to tell you the truth, I kinda got hurt.”, the guy tells DiPierro, “She dumped me for some old dude at the bar.”
“Her contact?”, DiPierro asked.
“No, I just think she’s into old dudes.”
He may be right. She seems to have a think for Price. Ewwwww. 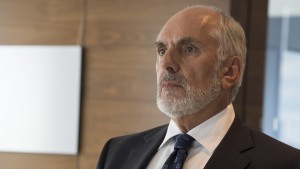 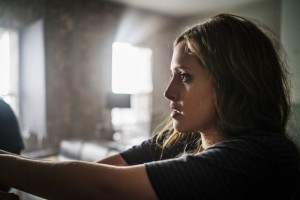 The next morning Darlene wakes up at Cisco’s place. She hears the shower running. She gets up looking uneasy. She sees his computer on the table and sits down to have a looksy. She sees that he has a video feed of her sleeping and that he’s been in contact with The Dark Army telling them that ‘she’s here’. Cisco comes out of the shower looks over and sees his computer destroyed on the floor. He looks over at Darlene and she’s holding a baseball bat. She takes a big wind up and swings for his head! Killing may be coming easier to her.

This was a tight episode. No Joanna, less Angela, more Darlene, more tension. Obviously, Elliot returns next week and will be walking into a mess. Four episodes to go and I hope the concentration remains on F Society vs the Feds vs The Dark Army storyline.

Jacob’s asks Trenton if this has ‘something to do with ISIS’.

The Dark Army have access to the FBI through F Society’s hack.

I’m with Mobley I would just leave Dodge now while they can!!