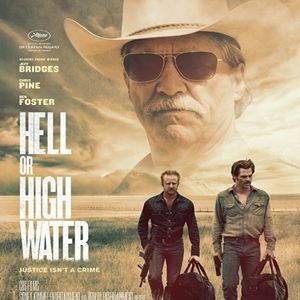 “You know they can foreclose on Friday, so come hell or high water, get the money to the bank on Thursday and then you are free and clear.”

Crime films have made quite an evolution over the years. Good guys and bad guys became more confusing as moral ambiguity crept into the psyche of the country. By the time the Seventies came along we were rooting for the bad guys and the good guys were the squares that just didn’t get it. But you can go back to 1939 and watch Jesse James (Dir. Henry King) with Tyrone Power and Henry Fonda playing bank robbing brothers and see this starting to happen. The James boys were just innocent Missouri farm boys that turned outlaw because the banks were foreclosing on their Ma’s farm so that the railroad could go through their land. Robbing banks made them the heroes of the people. The film came out in 1939 as the country was just coming out of a terrible recession and became a monster hit. This new ‘western’, Hell Or High Water, tells a similar tale and comes out at a time when the country has gone though economic hard times that have left a lot of people behind. There are no new stories only new ways to tell them. 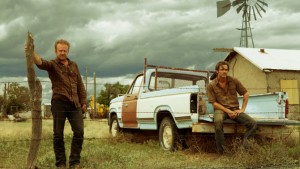 When we first meet Toby (Chris Pine) and Tanner Howard (Ben Foster) their wearing ski masks and robbing a bank. We don’t know who they are, that they are brothers or why their robbing banks. It’s a great way to open the film. The story unpeels slowly and deliberately and lets you get to know these characters. Right away you know that one guy is an amateur at this and the other loves it. And loves to drive fast. Enter the Texas Rangers and the always wonderful Jeff Bridges as Marcus Hamilton, a gruff and crusty ranger three weeks from retirement and his ‘half-breed’ partner Alberto Parker (Gil Birmingham). Marcus is constantly teasing Alberto with racial taunts. When Alberto bristles at one of Marcus’ quips about him being an Indian he reminds him that he’s also part Mexican. “Once I get through all my Indian material I’ll start in on the Mexican stuff.” Marcus tells him. Bridges and Birmingham create a great relationship onscreen. Alberto may be annoyed by Marcus but Marcus reminds him that once he’s gone he’s going to miss him. You feel Alberto knows he’s right. The Rangers go on the hunt for these bank robbers and Marcus comes off as a cross between Matlock and Colombo with the combined charm of both. 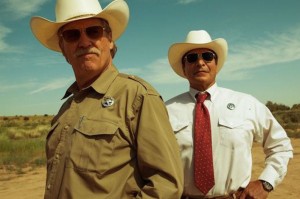 Eventually you find out Toby and Tanner are brothers and that Tanner has spent time in prison for bank robbery while Toby has taken care of the farm and their mother, who has recently died of cancer. The farm is being foreclosed on by the bank and they need to raise enough money to keep it from happening. The added wrinkle is that they’ve discovered the land is oil rich. Toby has come up with a plan and Tanner agrees to help him. It’s creative, daring and risky. The brothers have a lifetime of issues between them but the one thing that is constant is that they love each other. Toby also has an ex-wife (Marin Ireland) and two young boys that he’s thinking about and the plan is to leave the farm to them to make sure that their future is secure and the cycle of being poor comes to an end. Of course, things don’t go exactly as planned and Marcus and Alberto close in. The finale is surprisingly emotional and satisfying. 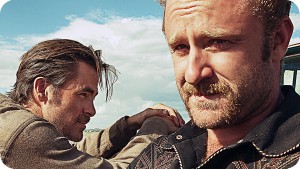 Toby: You talk like we’re not going to get away with this.
Tanner: I ain’t never met nobody who got away with anything ever.
Toby: Then why in the hell did you agree to do this?
Tanner: Cause you asked, little brother 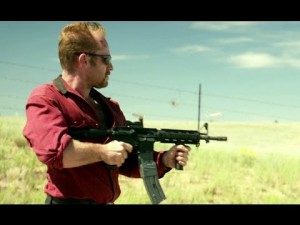 Hell Or High Water is a crime film and a buddy film with a splash of film noir thrown in which makes it a very fascinating piece of work. The script by Taylor Sheridan (Sicario) is rich with great dialogue and director David Mackenzie (Young Adam) captures the West Texas landscape beautifully and elicits powerful performances from Jeff Bridges, Chris Pine and Ben Foster. Jeff Bridges is an old pro and he’s completely convincing. You might recognize a little of the character that Tommy Lee Jones played in No Country For Old Men which covers some similar territory. Chris Pine gets to strut his acting skills beyond playing hero and bad boy Captain Kirk in the Star Trek films. He’s excellent and has great chemistry with his onscreen brother played with great joy by Ben Foster. Foster has long been known as an excellent actor but this may be a big break for him. I can see an Oscar nomination for Supporting Actor coming his way. He gets to play a scene right out of High Sierra (1941) Dir. Raoul Walsh. In fact, if this film were made in the 1940s it would have been done with Clark Gable and Humphrey Bogart which Pine and Foster kind of resemble in this film. 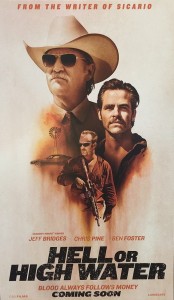 This is a really fine film that stays with you. It’s one of the best films of the year. It’s nice to see good old fashioned storytelling in a time when most films are either super hero franchises or animated. This is a grown up film for grown ups.