THE NIGHT OF EP7 ORDINARY DEATH 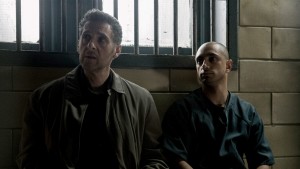 We’re in the homestretch. The penultimate episode of the show pivoted on the trial. Stone plays detective but not very well as Andrea’s step dad, Don Taylor, turned the tables on him. Naz sinks deeper into prison life under Freddy’s tutelage and Chandra gets too close to her defendant. 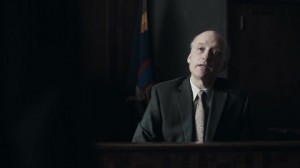 DA Weiss (Jeanne Berlin) presents her case in a very powerful way. It may be all circumstantial evidence but the accumulative effect sure seems damning. The crime scene photos are shown to the jury as well as the courtroom. Twenty two wounds on Andrea’s body. The coroner testifies as Weiss asked and said that the cut on Naz’ hand was from the knife slipping as he stabbed the victim. Naz’ mom couldn’t take it anymore and runs out of the courtroom.
Chandra found her in the restroom after and told her she can’t do that, it reflects badly on her son. But she no longer has faith in her son’s innocence.
“An animal did that. Did I raise an animal? 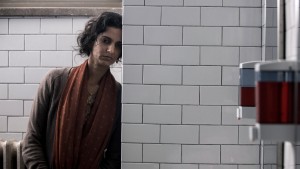 When Naz tries to call her from his cell phone she does not answer and continues her work mopping the floors.

Weiss puts the teacher from Naz’ old school on the stand to testify to his violent streak. Chandra is taken by surprise on cross examination when the teacher says that Naz assaulted two kids. She was only aware of one.

She questions one of Naz’ classmates that would buy amphetamines from Naz. Naz would charge $10 per pill that costs him 25 cents with his prescription. He was already a pretty good drug dealer himself apparently.

Finally Box takes the stand to testify about the timeline and the evidence. Chandra tries to poke holes in his testimony, pointing out that Naz never confessed but he remained confident.
“I’ll take evidence over a confession any day of the week.” 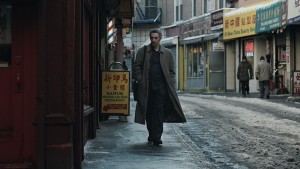 Stone keeps shadowing Don Taylor, Andrea’s step dad. Andrea’s financial advisor gets Taylor’s credit history and tells Stone to see Taylor’s ex wife. He even joins the gym Taylor works in and starts asking around about him. While working the bench press, Taylor surprises Stone and tells him that he has been watching him and knows all about his ex wife and son and warns him to stop following him. In court, the coroner admitted that 22 stab wounds would indicate a crime of passion and that might point to Taylor more than Naz. Still, Stone has absolutely no proof that Taylor was involved. Seeing Turturro on the treadmill trying to get info out of his physical trainer was fun.

Stone still has a cat problem. The problem being he really likes the cat but it’s killing him! At one point the cat gets out of the room Stone keeps him isolated in and crawls into bed with Stone. When he wakes up and sees the cat he jumps out of the bed and can barely breathe! I guess the cat is a metaphor for Naz? He likes the cat when it’s locked up in his room but when he gets out he’s toxic.

Stone is still having problems with his son. He finally goers to his son’s school and the son tries to ignore him as Stone calls for him from the fence. He just wants to show him that his feet are better and he’s wearing shoes. He wants to give him the cat but the kid doesn’t want a cat. “I want a pit.” He tells Stone. It’s sad because they seemed close at the start of the series and the son has become increasingly embarrassed by his father. 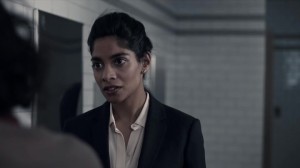 Chandra puts Dr. Katz (Chip Zien) on the stand and he’s wonderful. He testifies that there is a missing knife; the set should have 4 knives. He says that the back door to Andrea’s apartment didn’t shut and someone could have entered and gone up the stairs without someone in the kitchen noticing. He also states that the cut on Naz’ hand came from breaking the glass in the front door when he came back into the apartment. It’s strong conjecture but Weiss knows him. He’s an expert witness at many trials and well known. This scene was extremely entertaining. Jeanne Berlin and Chip Zien are two old pros working a nicely written scene and they look like they had a ball. It definitely put some questions to the jury but without an alternative suspect to present it doesn’t mean much.

Stone discovers that Naz’ inhaler was at the crime scene but not logged into evidence. Naz tells them that Box have it to him at the station. They put Box back on the stand to question him about this and try to paint him as unethical. They also point out other suspects (the step dad, the drug dealer, the hearse driver) and ask why Box didn’t question them. But Box holds firm. All the evidence pointed to Naz. 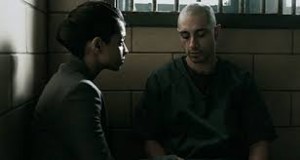 The real shocker comes in the scene between Naz and Chandra in the holding cell. Naz tells her that the only person that believes he’s innocent is his father. Chandra tries to assure him that it’s not true. She believes in him. Naz sees that she is fighting hard for him and he asks if it’s more than just her belief in his innocence. Then they kiss. What? Chandra catches herself and knows immediately she screwed up. There are cameras in their catching everything. Is this going to come back to haunt her?

Naz continues smoking crack in his cell. He notices that Petey, the young newcomer that Freddy took under his wing in exchange for his mother sneaking in drugs, is still being used for sex by the older inmate. Naz goes to meet Petey’s mom in the visitation room this time, taking the balloons filled with drugs directly and easily popping them in his mouth and swallowing them. He’s becoming an old pro at this. When Petey’s mom asks about her son Naz reassures her that he’s fine. But one night upon his return from court, Naz stops in the restroom and sees a pool of blood coming from the far stall. When he goes to look he sees that Petey has slit his wrists and is dead. 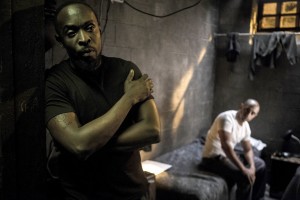 Freddy is upset of course because this means the drug train will stop. He doesn’t understand why Petey would kill himself, everything seemed fine. Later on Freddy comes into Naz’ cell and sits down. “”You have something to tell me about Petey?” He asks Naz. Naz simply replies“Yes.” Next thing you see Freddy and Naz come down from their cell floor and while Naz distracts the guard in the booth, Freddy slashes the throat of the inmate responsible for Petey’s death with a razor blade.

There is only one episode remaining and it’s becoming more and more apparent that the bigger picture is not whether or not Naz killed Andrea or not but how the criminal system and incarceration can transform a young man into a criminal. Even if Naz is found not guilty he will be haunted by the crimes he committed while in prison and he may end up doing these things once back outside. 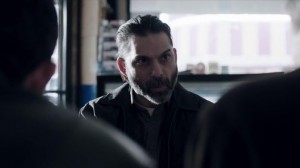 Naz’ parents have lost everything even respect in their community. His father sells his share of the taxi for a third of his investment. They also pawn everything of worth in order to help pay the lawyers. Things will never be the same for them.

And what about Dwayne Reed? He has to pop up again, right? But it may be just another red herring. I’m afraid there will be no happy ending to this story. Stone may even have to give up his cat. 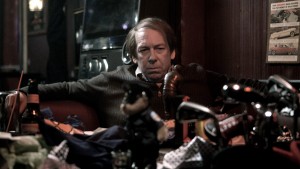 Then there’s Detective Box. We see his last day on the job and his retirement party. They give him a set of golf clubs. He stares at those clubs knowing he’ll never use them. The only thing that made his life worth anything was the job. He’s good at it. What will he be good at now? Will he be the subject of a future crime scene? His own?