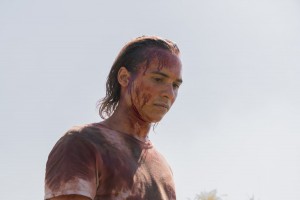 Fear The Walking Dead is back! The Mid-Season premiere probably was not the episode everyone expected or even wanted but if you were “Nick’ fans you were in heaven! That loveable addict who never combs his hair and is always covered with dead walker goo was the focus of this stand alone episode. As you remember, the last time we saw Nick (Frank Dillane) he was refusing to go with his Mom, sister Alicia, Strand and Ofelia as the Abigail estate went up in flames and zombies invaded. Nick was really sore at Madison for the cold blooded murder of his new friend, Celia. He wandered off, walking with the dead, as he is want to do, headed to who knows where. 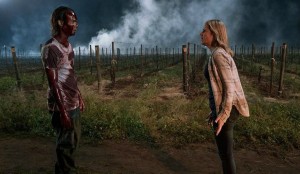 In this episode we see where he wandered to but he definitely doesn’t seem to have a specific destination in mind. He’s on a spiritual quest. A walkabout, if you will. He seems to make friends pretty easily and at the start of the episode we see him with a woman and her young son. They go off looking for the rest of their family and tell him to head for a big city where they might be a community of living people. He hugs them goodbye while covered in walker goo! And they hug him back! Do they even thick this is odd? No, it’s just Nick!

Nick wanders down the road. He finds a place for the night and starts a fire. Now this place had no doors, open windows, too many entrances, not a defensible position. Why would he stop there? And start a fire that would draw zombies! Well, it wasn’t zombies that showed up but a woman and her young daughter. Apparently this was their spot and the lady was yelling and screaming and hitting poor ole Nick with a baseball bat! He had to run for his life leaving his bag of provisions and water. I thought he should have been able to take the lady but you know Nick. He doesn’t like hurting anybody, living or dead or clobbering him with a baseball bat apparently. 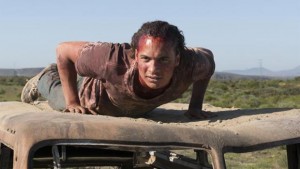 Now Nick has no water and no food or anything but the walker goo covered clothes on his back. He comes across some cars on the highway. He opens the door of one car that has a walker in it still in her seat belt. He sees a radio on the dash and reaches in to get it. This walker is almost biting him and he’s acting as if it’s just some annoying dog nipping at his arm. He gets the radio but you’d think he’d be a little more careful. Then a jeep with some bad hombres come along. They kill a zombie. Then they come across a guy in his car that hasn’t turned. He’s still alive but dying. The guy asks for water and they kill him. Just then that radio Nick risked his life to retrieve goes on and alert these guys to Nick. He starts running and they start shooting at him. He gets away but he still has no water and no idea where he is. 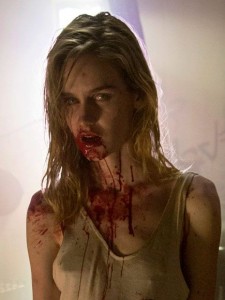 Mixed in with the Nick’s present predicament we get some flashbacks to Nick’s previous predicament; drug addiction. We see Nick in rehab with his addict girlfriend, Gloria, who looks really nice and sweet for being in rehab. This is the same woman from Episode One that Nick was with in the church. She was also the very first zombie we see on this show. Was she ground zero for the epidemic? We learn Nick had some resentment towards his father pulling away from him and not being there. We see Madison visit Nick and tell him that his dad was killed in car accident. We even see Nick and Gloria in the church presumably the night before everything went sideways. Nick was wearing that Elizabethan white shirt that he wore in the first episode. Obviously, that stay in rehab didn’t take. 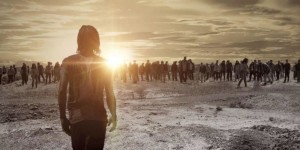 Back in the present, Nick tries to get water from a cactus but that doesn’t work. He eats the cactus which makes him sick and throws up. He pisses in his hands and drinks his own pee! He gets attacked by wild dogs and bitten pretty badly. A herd of zombies come along and those crazy dogs attack them. Zombies eat Dogs. Some folks were upset about his but, fair is fair, they did attack first. Shooting in the distance draws the herd away and Nick joins them! Some Dance with Wolves. Nick Walks with Zombies. As they meander down the highway Nick starts hallucinating. He hears them talking. My friend, Charlotte wondered if they had some shared consciousness but then Gloria appears to him as a zombie and offering words of comfort. 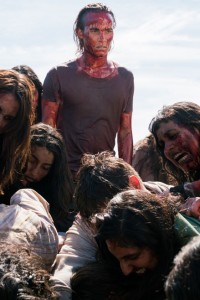 Just then, that jeep with the bad hombres shows up again. They get out and start shooting zombies. Nick just keeps walking with them, zombie heads exploding to the left and right of him. I guess he doesn’t care about dying. Then one of the bad guys notices Nick. Nick is looking right at him. He gets freaked out and drops all his bullets. The zombies reach him and feast on his neck. They also get one of the other guys. I’m not sure how he let that happen, these zombies are slow movers. The guys in the jeep take off right quick! For a moment I thought Nick was going to join the zombies in the feast! He’s starving! But he doesn’t.

Up on the ridge we see a woman and two men watching Nick through binoculars. They wonder who this crazy guy is. The two guys want to go help him but the woman says no.
Eventually Nick collapses from dehydration and the herd leave him behind just as the people on the ridge. Fortunately it starts to rain! Water! Nick is saved!

Nick makes it to Tijuana and tries to patch up his dog bitten leg when he runs into the woman and two men who observed him on the highway. The woman’s name is Luciana (Danay Garcia) you just know Nick and her are going to fall in love, right? Once they’ve made sure it wasn’t a zombie bite they take him back to their compound and he meets the doctor and probably leader of this community. As he patches him up and gives him some much needed advice. “Death is not to be feared. It’s also not to be pursued.”

Once he’s patched up he leads him outside where people are moving around normally, kids are playing soccer, people are working stands filled with clothes and food. He’s come across a flea market heaven! Is this what Nick had in mind when he started this journey? Heaven knows! But at least he’s safe for now. But as with everything in the Walking Dead world, there must be something wrong with this place. 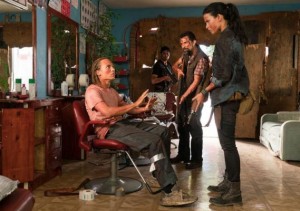 The Walking Dead likes to do these stand alone episodes and for the most part they are pretty good. It allows for more character definition and insight. Nick is one of the more interesting characters on the show but he’s also frustrating as hell. He just doesn’t seem too bright. I didn’t understand him just abandoning his mom and sister and going off on hi own. This is the zombie apocalypse, man! Even if you wanted to how would you ever find them again? Of course, they will find each other again because that’s the show. 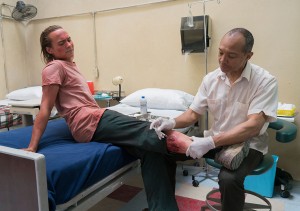 I kept thinking while watching this episode “This is what you get! Should have stayed with your mommy!” He needs to toughen up and maybe that’s what his character arc is going to be in the back half of the season. And comb your hair!!!!