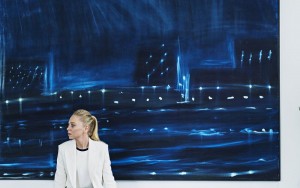 “It’s not the destination it’s the journey. But what if the destination is you? What if it’s always you?” Elliot
This show is a maze of the mind. Mostly the mind of Elliot Alderson. Throughout the first six episodes we’ve seen the breakdown of Elliot, body and soul. In Episode Seven we begin to see him put his pieces back together again and make peace with himself and with his later ego Mr. Robot. But it left me with many questions and forces me to rethink what came before. I think we all had doubts about where Elliot really was. There was plenty of talk about alternate realities and what if scenarios. I kept wondering why there was no interaction with Elliot’s mom. Last week we got to see what Mr. Robot looked like as an 80s sitcom. This week we get the Twilight Zone version.

I have to say I’m not all that interested in Joanna Wellick. She looks great and the occasional S&M sex scenes are interesting but I’m not seeing what her story has to do with anything else. The episode opened with a flashback to an E Corp party where Price introduces the Wellick’s to Scott and Sharon Knowles. OK. Then we see Joanna pushing her baby carriage and a woman throws a bucket of blood on her and screams “Capitalist Pig!” Joanna screams. She was wearing all white you see. Gonna have to toss that outfit.
Later on we see her with her boy toy/bartender having rough sex. He’s turning 30 and wants her to come to his party as his ‘girlfriend’ or their through. When she doesn’t go to his party he confronts her but she says she was busy speaking with her lawyer. She hands him a scroll wrapped in a bow. “This is my birthday gift to you.” Divorce papers. So romantic. Now come to bed and choke me again. 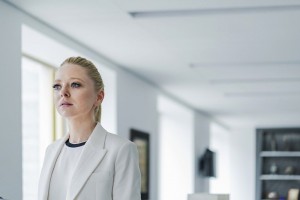 We see the rest of the Agent DiPierro – Angela encounter that started last week. Before Angela can complete the code that would give F Society access to the FBI DiPierro approaches her about being on a restricted floor. Angela tells him she was just making a date but DiPierro isn’t buying that. She knows Angela left Allsafe one week before the hack and now lands a job at E Corp. Something fishy going on and she wants to interrogate..er..have a discussion with Angela about it. “Whatever this is, it isn’t you.” DiPierro tells her. Once DiPierro walks away, Darlene feeds Angela the last part of the code and viola!! “We just owned the FBI”, Darlene tells her. 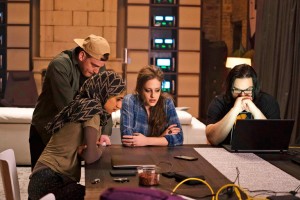 Later on, DiPierro has someone look into the database and it’s obvious they have been hacked. They are onto F Society. So when Mobley, Cisco, Trenton and Darlene look at their screen and smile about something going down the next day you have to wonder if DiPierro hasn’t planted some false info to draw F Society into a trap. 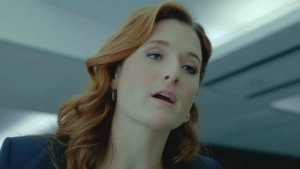 Angela is a real puzzle this year. She’s become so cold and robotic. The scene with her father was disturbing. When did she turn on him? She wants him to agree to let E Corp off the hook on inspections of the water in their hometown because she made a deal with Price and E Corp would settle the lawsuit. Her dad doesn’t buy it and laughs. “You laugh but trust me, they respect me.” He refuses to agree but it didn’t matter because she already got two thirds of the signatures she needed to make it happen. “ Why did you come here because you certainly don’t give a shit about my opinion?” Her dad asks. “This was just a courtesy.” Angela coldly responds.

She tells Price what she did and he agrees that E Corp will settle. She asks to be transferred to Risk management which baffles price because it’s a lateral move. But she gets what she wants and once in her new position she pushes to be involved in the daily briefings. Her new supervisor agrees but when Angela pushes to review the Washington Township records he lets her know that he knows who she is. What is her end game? Her character change from last season has been drastic and quite frankly isn’t making much sense to me. 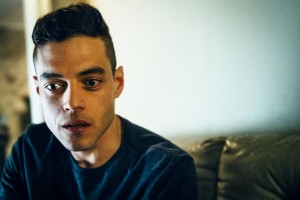 Elliot and Mr. R have realized they need each and make an alliance. First things first, what happened to Tyrell? Mr., R tells Elliot that after he completed the hack he (Mr. R) took the gun that Darlene had hidden in the popcorn machine and shot Tyrell.
“No. I shot him.” Elliot says. Hmmm, if that’s true then who has been sending Joanna cell phones and music boxes?

“When you see a good move look for a better one.” Emmanuel Lasker, Chess Master

Ray and his partner bring Elliot back to their office and tell him to finish the work on the website migration and that they’re going to keep him until they’re sure that it’s ‘purring like a kitten.” Elliot does as he’s told but instead of being taken back to his ‘cell’ he asks Ray for a game of chess, for “old time’s sake.” Ray agrees and goes on to tell him that the idea for the site was his late wife’s but that neither of them ever thought it would be so successful and they never looked at what people sold on the site. Ray had never looked until Elliot came along. “You are my answer not the other way around so I thank you.” Ray tells him. “How much time do I have?” Ray asks. See, ray knew that Elliot would fix it so that the authorities would see the site and the cops would be there soon. He was grateful for it. Sure enough Elliot had sent an anonymous tip to the FBI and there were there in minutes.

Once again Elliot is at the basketball courts with his old friend, Leon. Some folks are upset about the site being down and know that Elliot is to blame. A group of white guys approach Elliot and Leon and tell Elliot that since they had $800 unused bit coin on the site that they now can’t access that Elliot would have to pay them back.

Elliot returns to the church group and apologizes to the woman church leader for his previous outburst. She tells him, “I’ve seen you talking to him, not out loud but I’ve seen it on your face.” Elliot is confused but she thinks he’s talking to ‘Jesus’, of course. She leaves him to have some alone time but it’s with Mr. R not Jesus.
“I need to finish what I started with E Corp but I don’t know what to do.”
Mr. R tells Elliot that the hack was Elliot’s choice not his and that he just followed.
“You are a leader. You need to lead.” Mr. R tells Elliot.

Elliot proceeds to burn his notebooks when all of a sudden that group of white guys from before grab him and take him to an alley. They start beating him up (again!) and demanding he repay them. He’s about to get raped when he hears the men getting assaulted behind him. He turns around and they’re all on the ground having been slashed. He looks up and sees that it was Leon who came to his rescue.
“ You’re going to get a letter on Tuesday. Do what it says. When you see Whiterose make sure you say I did you good. I’ll be rooting for you, cuz.” And like a super hero he’s gone. So Leon is an agent of The Dark Army asked to look after Elliot. OK. 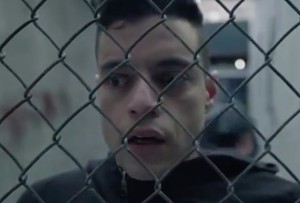 Next we see Elliot in Krista’s office. She asks how his relationship with Mr. Robot is going and he tells her, “For the first time we trust each other. I help him and he helps me. You were right. You can’t destroy a part of yourself.” Then Krista asks him “Elliot, I have to ask. Where do you think you are right now? You know you haven’t been staying with your mother, right”
“I know.” He answers. A siren goes off. He’s in prison.
“When you get released I hope you continue seeing me in my office.” She tells him.
He had masked his being in prison with the illusion of being at his mother’s and being back in his old neighborhood. The diner was actually the prison commissary. The woman we thought was his mother was his guard and so on. “Next stop – The Twilight Zone!”

“Please don’t be mad at me”, Elliot tells us, “This will be the last time I keep things from you. I promise. Shake?”

1 Why is he in prison? For killing Tyrell? He wouldn’t get out. The hack? No, it doesn’t seem like anyone knows who did that still. Then what? His affiliation with Ray? Was that something that actually happened?

I like twists and it was clever how he revealed the illusion Elliot created and how they morphed into the prison settings. I need to know the reasons before I can really know if it worked. The season has been disjointed but I’m riding with it because it’s an ambitious show and I love the directing style. I hope it ties the plot together like the rug in The Dude’s apartment.

The morphing of actual CSpan footage of The House Of Representatives with F Society protest of dropping the bronze genitals from the Wall Street bull through the roof! Well done!
Angela calling out Darlene for thinking her and Elliot were smarter than her. Calling back the times they made her watch that horror movie every Halloween. Angela recognized the mask from the movie being used by F Society.

Price telling Angela that it was his birthday and asking if she wanted to help him celebrate that night. Angela answers with a flat “No.” Oh well. Maybe next year.

The banner in the room where the church group met says ‘You Are Not Alone’ reminded me of The X Files.