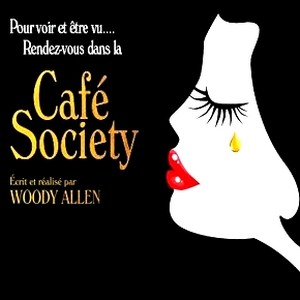 I’ll admit up front that I am a big Woody Allen fan and not just of his ‘earlier funnier films’. Of course, I grew up loving him as an actor in What’s New Pussycat? (1965) and Casino Royale (1967) and then as actor/writer/director in Take The Money And Run (1969) and Bananas (1971). My favorite is probably Hannah And her Sisters (1986) which is probably his most optimistic film. He’s made some real clunkers in the last twenty years Scoop (2006), Cassandra’s Dream (2007) but he’s also made some of his best, Sweet And Lowdown (1999), Midnight In Paris (2011). He makes one movie every year so there are bound to be ups and downs. I categorize his films in three levels:
Poor (Think September, Anything Else), Good (Think Magic In the Moonlight, Manhattan Murder Mystery) and Prime (Hannah, Midnight In Paris). This year’s ‘Woody’ falls in the ‘Good’ category. 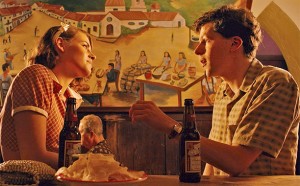 Café Society is a love story set in Hollywood and New York circa the 1930’s. Jesse Eisenberg plays Bobby Dorfman a young kid from New York City who heads to Hollywood to work for his Uncle Phil (Steve Carell) a successful talent agent. He falls for Phil’s secretary, Vonnie (Kristen Stewart) who is secretly having an affair with the married uncle. Classic complicated love triangle. 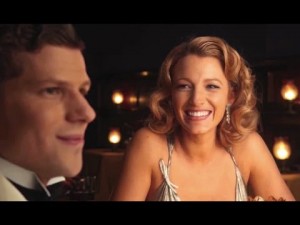 Bobby’s older brother, Ben (Corey Stoll), is a gangster that runs a nightclub. When Bobby decides to move back to New York Ben brings him in as a partner in the club and Bobby matures into a big time club owner and starts a relationship with a beautiful divorcee (Blake Lively) but his feelings for Vonnie never go away. 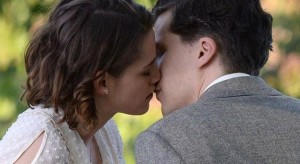 I’m a movie buff and I love old Hollywood but some of the references in the film may be lost on younger viewers. Who knows who Adolph Menjou or Robert Taylor is? Woody is known to write down ideas for stories on scraps of paper and tossing them in a drawer. He goes fishing through them and picks one he likes and that will be his next movie. If you’re a Woody fan you may recognize a little Radio Days (1987) and a dash of Bullets Over Broadway (1994) in this new film. Those are bother better realized films that take place in the same time period. If you’re not familiar with Allen’s oeuvre and are coming to the film as Jesse Eisenberg and Kristen Stewart fans you will probably enjoy the film much more. Eisenberg and Stewart have great chemistry and have proved  having worked together before, most notably in the sweet Summer time film Adventureland (2009). 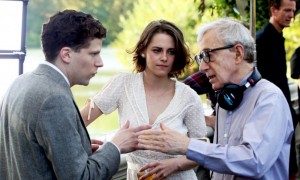 It’s a beautiful looking film. The sets and costumes are gorgeous. The performances from the entire cast are great as they always are in Woody Allen films. Woody always assembles a great cast and they never disappoint even in the lesser Allen films and many times they make the good ones even better, think Cate Blanchett’s Oscar winning turn in Blue Jasmine (2013). 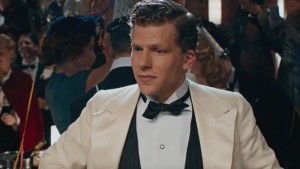 Jesse Eisenberg is perfect as Bobby. Eisenberg can come off as annoying and mannered sometimes but it’s those traits that play perfectly in Allen’s films. In Café Society, he gets to grow as a character into a more mature man of means and he plays it nicely. But the stand out here is really Kristen Stewart. She’s the heart of the film. She’s very natural and genuine and you can see why both Bobby and Phil fall hard for her. She never forces her performance and while many of the other characters are playing two dimensional archetypes, Stewart’s Vonnie is a fully realized person. 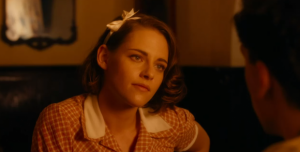 The film has many funny moments and there are always some great one liners in a Woody Allen film but the mood is definitely bittersweet. Woody has never made a sequel but at the end of this film I could actually see one coming out of this story. Where would Bobby and Vonnie end up twenty years later in a post war Los Angeles or New York City? It would certainly be interesting to see Woody tackle a full on film noir, wouldn’t it?

Previous THE NIGHT OF – EPISODE 5 THE SEASON OF THE WITCH Next MR. ROBOT S2EP6 eps2.4_m4ster‐s1ave.aes