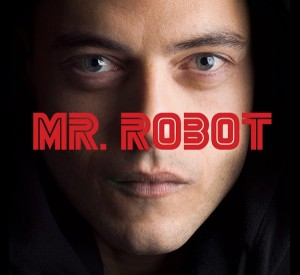 “Control Is An Illusion”

Season Two picks up right where Season One left off. Elliot (Rami Malek) /Mr. Robot (Christian Slater) completed the mission to wipe out consumer debt by destroying E Corp’s data. The world descended into chaos and Tyrell (Martin Wollstrom) and Elliot disappeared. It seems Eliot has retreated to his mother’s home and is trying to reprogram himself. He literally seems to have short circuited. He follows a strict regimen every day, keeps a diary of his activities, even started seeing his psychiatrist, Krista. He has meals with his friend, Leon, who has just discovered Seinfeld and can’t stop talking about it. 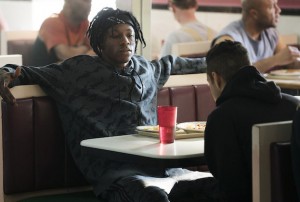 “There’s this one episode where they go to a Chinese restaurant, and they’re just waiting for a table the entire time. Like, they don’t even eat at the end, bro. Maybe I’m over thinking it, though. It’s really fucking with me.”             Leon 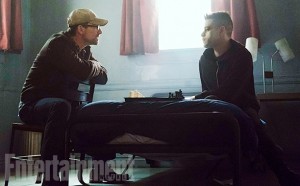 He goes to the park to watch pick up  basketball games, he goes to a church group and he comes home, goes to bed and does it all over again the next day. The only problem is that Mr. Robot keeps trying to get him to get back to work, back to leading F Society. His relationship with his alter ego has become contentious. Elliot and Mr. Robot are at war with each other, which is to say, Elliot is at war with himself. Mr. Robot wants to get back to work and Elliot wants to know where Tyrell is. Neither one is giving ground and their struggle can be quite violent. 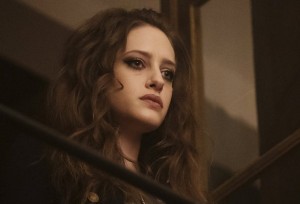 Meanwhile, Darlene (Carly Chaiken) has assumed the leadership role with F Society and she has expanded the operation and runs it with a steel fist! But behind the tough facade she seems to be lost or maybe feeling alone. She seems to feel she may be in over her head. There’s a great scene where they hack into the ‘smart house’ of E Corp’s legal counsel and chase her out so that they can take it over and make it their HQ. They hack into E Corp’s banking system and hold it for ransom of $4.9 million. They get CTO Scott Knowles (Brian Stokes Mitchell) to bring it to Battery Park and there a bike messenger delivers an F Society mask with a message written on it. “Put on the mask and burn the money”. Knowles does it in front of a huge crowd that film the whole scene on their phones. 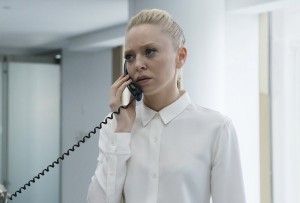 Angela, has becomes more ensconced in her role in the PR department at E Corp. She’s good at it and seems to enjoy the power. She handles the scandal from the money burning of the night before with shrewdness we haven’t seen from her before. No one likes her but she gets the job done. It certainly seems as if she’s drunk the kool aid but is she too far gone?

Tyrell’s Lady Macbeth of a wife, Joanna (Stephanie Corneliussen) is marking time til her husband resurfaces by having S& M encounters with some hot dude. She gets a package with a cell phone taped to a music box which we assume was sent from Tyrell. She misses his call however while she goes to tend to their newborn. 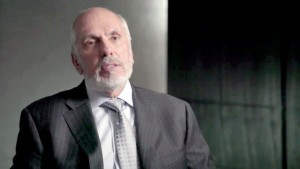 The CEO of E Corp, Phillip Price (Michael Cristofer) is called to Washington to address the banking scandal and is asked to resign. Price refuses and gives a wonderful speech about how they are all con men and the American people will buy what they tell them to buy. The scene uses Michael Small’s score from The Parallax View to support this speech. Alan J. Pakula’s 1974 dark, paranoid conspiracy film is a good companion piece to Mr. Robot as are several films from the 70’s paranoid genre. Sam Esmail loves to drop in these film homages in every episode and this one was particularly effective.

Poor Gideon (Michael Gill) ! Looks like he’s being set up to take the fall for the hack. He goes to see Eliot and pleads for his help but Eliot refuses as Mr. Robot chides him. Gideon ends up talking to an FBI agent (Grace Gummer) before meeting his fate in a bar. He is approached by a man who Gideon at first believes is coming on to him but turns out he recognized him from TV and ends up shooting him in cold blood ‘for our country’. Pretty dark. 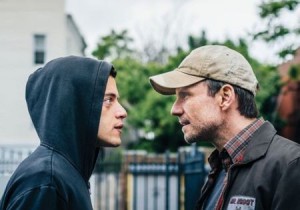 By the end of the episode two things become apparent. The first is that Elliot is not as in control as he thinks he is. A man with a hound dog (Craig Robinson) he meets at the basketball courts tries hard to be friends and seems to know his background. Elliot plainly tells him that he wants nothing to do with him but turns out Mr. Robot has spoken with him much to Elliot’s horror. “I’m going to make you realize that they see Me.”, Mr. Robot tells Elliot.

The second thing is Tyrell seems to know where Elliot is. Elliot answers the ringing phone and it seems to be Tyrell at the other end. 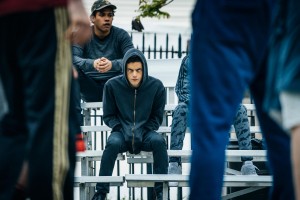 Sam Esmail has created a very unique show. The first season was great. I was wondering how they would keep it interesting once we knew that Elliot and Mr. Robot were the same person. But the premier episodes of Season Two show a definite road forward and new schemes in the making. It certainly has my attention and I am intrigued by what’s being set up.

Previous EMMY PICS 2016 – DRAMA Next THE NIGHT OF: EPISODE TWO – THE SUBTLE BEAST