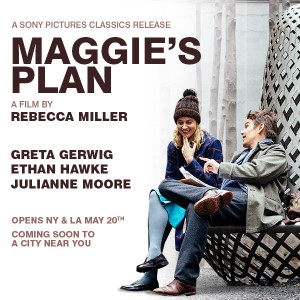 Maggie’s Plan is a screwball comedy that doesn’t quite achieve screwball status. Writer-Director Rebecca Miller (Arthur Miller’s daughter and Daniel Day Lewis’ wife) has a light touch and gets good performances from her leads, Greta Gerwig, Ethan Hawke and Julianne Moore which make it well worth watching. If this film had been made in the 30s or early 40s it would star Cary Grant, Irene Dunne and Katherine Hepburn and be directed by Howard Hawks. I can see Gerwig, Hawke and Moore fitting into those shoes very nicely actually. Gerwig has made a name for herself doing more broad character comedy in Frances Ha and Mistress America. Moore was in The Big Lebowski! She can go there and is allowed to in this film as well.  Hawke, I feel is underrated as a comic actor but he’s very funny and I could see him stepping into Cary Grant territory very easily.  Check out The Bachelor And The Bobby Soxer (1947) Dir. Irving Reis. Someone write a contemporary version for Mr. Hawke!

Maggie (Greta Gerwig) is a young woman who longs for motherhood and is ready to be a single parent. She ends up falling for John (Ethan Hawke) a married man and a “ficto-critical anthropologist”, whose marriage to Georgette (Julianne Moore) a Colombia University professor is breaking up. John leaves Georgette and their two children and marries Maggie and they then have a child. A few years later Maggie’s life is not how she imagined. She has the child she always wanted but must now also deal with John’s older children with Georgette as well as Georgette herself. John is busy with his career and Maggie’s life has become taking care of everyone else. She comes up with a ‘plan’ to get John and Georgette back together since she feels they really still love each other and she’s fallen out of love with John.

It’s a light entertainment with a really likeable cast. I felt it navigated the middle of the road and never really investigated the characters feelings very deeply. If the film had moved further into the comedy or screwball comedy terrain than this wouldn’t have felt necessary. It felt like Woody Allen light. Still, that being said, I enjoyed it, mostly because I love all these actors and they make everything better. 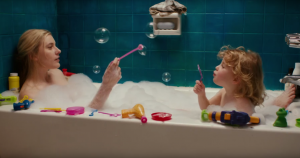 Previous LOVE & FRIENDSHIP Next THE LOBSTER