GAME OF THRONES Recap S6EP8: NO ONE 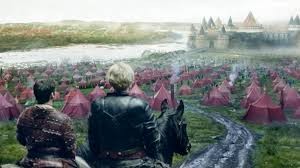 The chess pieces are still being moved into place. The Battle for River Run never takes place but Jamie and Brienne share some nice moments. Arya has a terrifying experience with the ‘Terminator’ version of The Waif and Cersei is screwed! The Hound gets back to doing what he does best: Killing people and having fun doing it. Let’s get started. 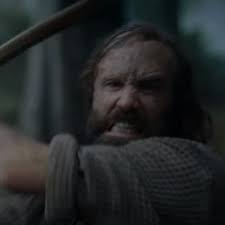 Those poor four guys, having a laugh around the camp fire, sticking their fingers in each others arse were just no match for The Hound and his fury. Were they even with the Brotherhood Without Banners? It didn’t matter. Seeing The Hound come up on them in the background as they laughed was scary! The axe to the groin was painful!

Later on, he comes across the three men that approached Brother Ray’s camp including the man in the yellow cloak. All three were about to be hung by Berick Donderrion and his co-hort Thoros of Myr, and they both seemed happy to see the guy they once wanted dead. Beric was going to punish them for what they did but The Hound demanded that he be allowed to kill them. They offered him one but The Hound successfully negotiated for two. When one of the Brotherhood points his arrow at him The Hound had a nice rebuttal. 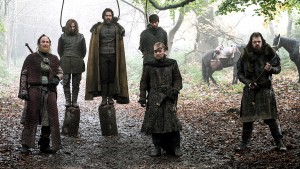 “Drop that arrow you fucking girl. Tougher girls than you have tried to kill me.”

The Hound wanted to hack those guys with his ax but Beric wouldn’t allow it. They were to be hung. “Can’t I just lop off a hand?” The Hound begged. Beric and Thoros ask The Hound to join them. It looks like he will but what will their next mission be? 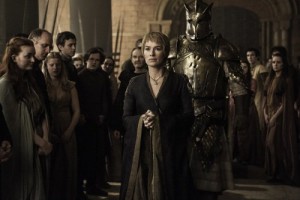 Lancel and some of his Faith Militant buddies come to The Red Keep to escort Cersei back to The High Sparrow. King Tommen allowed them entry. But Cersei had no intention of returning to prison cell. Lancel threatens violence if she does not come with them. 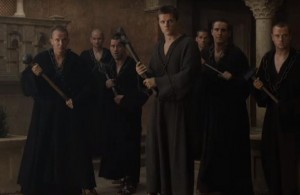 “I choose violence.” Cersei coolly states. When one of the faith Militant stooges sticks his fork-like weapon into the Mountain’s chest with zero effect the real violence began. The mountain ripped his head off! Lancel decided they came at a bad time and left a piss trail behind him as he and his men retreated.

Cersei and Maester Qyburn smirked proudly at this small victory but things took a turn for the worse when King Tommen made a royal decree outlawing Trial By Combat as an option for trials going forward. Tommen doesn’t even look at her as he left the throne room. Cersei is screwed! She is running out of options. 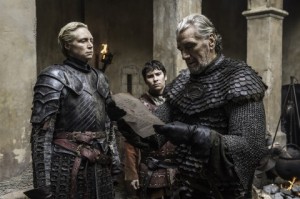 Cersei still has Jamie. And Jamie is desperate to end the siege at River Run and get back to her. Brienne and Pod arrive and Brienne makes Jamie a proposal. Allow her to enter the castle to try and convince The Blackfish to surrender the castle without bloodshed and Jamie will allow him and his men to go North to join Sansa. Jamie gives his word he would. Brienne then tries to return the sword Jamie gave her, Oathkeeper. She says she was given a mission and she achieved it by finding Sansa.

Brienne also warns him that if this doesn’t work and he attacks the castle she is bound by honor to fight for Sansa’s kin, meaning she would fight him personally. “Let’s hope it doesn’t come to that.” Jamie tells her. 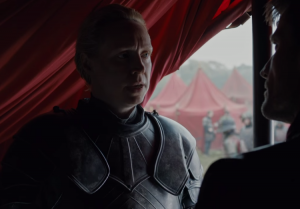 Brienne has no luck changing The Blackfish’s mind. He brushes her off at first, “I haven’t seen her (Sansa) since she was a child, I don’t know who wrote this letter and I don’t know you!”. Brienne convinces him to at least read Sansa’s letter and he immediately softens, “She’s just like her mother.” But in the end he will not surrender. “I don’t have enough men to help her retake Winterfell.”

Jamie has a back up plan, however. He has a chat with Edmure Tully. Here we see the old Jamie, the douche bag Jamie. Edmure asks him “Do you imagine yourself a good person? You understand, on some level, you’re an evil man.” Edmure’s right. Jamie can be nice, especially with Brienne and Tyrion but he really is an awful person. He tells Edmure he can reunite him with his son and wife if he plays along otherwise he will catapult all of them over the castle wall. The next thing you know Edmure is shouting at the castle gate to let him in. The Blackfish knows it’s a trap but Edmure is the proper Lord of the castle and The Blackfish is powerless as the Tully men let Edmure enter the castle. Once in he demands that everyone lay down their arms and lower the drawbridge, allowing Jamie and The Freys to take the castle. He also orders that The Blackfish be put in chains and handed over to the Freys. Edmure you tool!

The Blackfish gets Brienne and Pod away on a small boat and then unsheathes his sword.
“I haven’t has a proper sword fight in many years. I imagine I will make a damn fool of myself.” Then he goes off to his death. Jamie is standing on the castle ramparts when he spots Brienne and Pod slowly rowing away from the castle. Brienne looks back at him. Jamie waves goodbye and Brienne does the same. Will this be the last time they ever see each other. I think so. 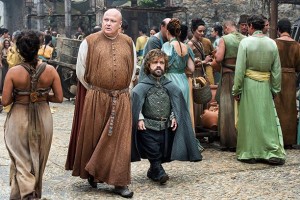 The city seems to have come back to life! The preachers of the Lord Of the Light are singing Dany’s praises and the people seem to be eating it up. Varys is off on a secret mission to Westeros to get ships, perhaps. Varys and Tyrion seem sad to say farewell. It was very sweet how close they have become. “I better take my leave. It’s not good to be seen with the most famous dwarf in the city.” As Varys walks away Tyrion called after him, “Varys! The most famous dwarf in the world!”

There is a sweet scene between Tyrion, Missandei and Grey Worm. Tyrion finally forces them to drink wine with him and to tell jokes. Missandei tells an awful joke to which Tyrion forces a laugh. I don’t care if she can’t tell a joke. She’s simply adorable. But the good cheer is interrupted when an armada of ships start attacking the city. It’s the Masters. Tyrion was wrong to make a deal with them as Grey Worm and Missandei warned him. Lucky for all of them, Drogon makes a landing on the pyramid and drops off one Daenerys Targaryen!

The episode begins with Lady Crane giving her speech over the dead Joffrey only this time she added a little something. Just as Arya suggested, she added some anger and ends the speech seeking vengeance! The crowd loved it! Once she went backstage she found a near death Arya. She sews up her wounds and gives her some milk of the poppy. Lady Crane wants her to join their troupe. Arya seeks more adventure besides she couldn’t memorize all those lines.

Their warm and mother-daughter relationship is short lived however. The waif shows up and kills Lady Crane. Such a shame. Arya jumps out the window and so begins a terrifying chase sequence. The Waif runs fast! And every time Arya jumped or slide or rolled down a hundred stairs I winced. By the end, of course, her stitches had come undone and she was bleeding all over the place. She kept leaving a blood trail and I was screaming ‘Arya you’re smarter than this!” and I was right. Arya lead The Waif back to Arya’s hiding place. She pulled out Needle and put out the candle making the room pitch black dark.

Back at the House of Black and White, Jaqen sees a trail of blood and follows it to the Hall of faces. He sees the Waifs face on display, blood still flowing from her eyes and mouth. He turns to see Arya holding Needle. “Finally, a girl becomes No One.” He says. 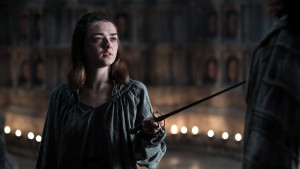 “I’m not No One. I’m Arya Stark of Winterfell and I’m going home.” She tells him and takes her leave.

Jaqen actually gives a little smile. You have to respect that kid. She sure has gumption!

Charlotte, what did you think?

So I missed a lot of this episode because it was so violent I had my head turned away in intervals, but there were a couple notable getups among the faces being ripped off and (I’m guessing from what I could hear) guts being ripped out. 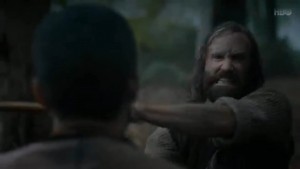 I was so happy to be back in Meereen among the blue and yellow ropey draped maxi dresses. I like to think that if I were somehow transported to Santorini this is how my friends and I would look. In my fantasy, however, everything is beachy and breezy and the city doesn’t go under siege by former slave owners.

Then we cut to Jaime who is currently tenting outside of River Run, where he truly proves himself to be the knight of trendsetting leather jackets. Remember last episode when he wore a moto styled leather trench? Well this episode’s jacket is all about the aureate clasps and tailoring. I want one. Unfortunately he eventually has to do a costume change (gotta overtake a castle) and dress up in his fancy beetle armor. Get that roly poly bug shell off Jaime and put on a new kind of leather jacket. I’m waiting! 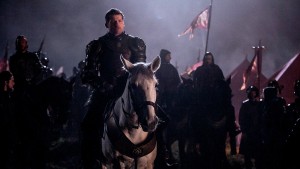 Missandei is still rocking some weird trousers and Cersei refuses to change out of the same dress she’s been wearing for weeks. I don’t even know why I’m bringing that up but come on… Missandei could totally outfit those leather crop tops better and Cersei must have so many other amazing dresses!! Change it up ladies.

Finally, this isn’t a fashion related thing, but did anyone else notice how this episode turned into Assassin’s Creed when the Waif was chasing Aria through Bravos? Roof jumping, obstacles, cloaks, merchants… I’m a nerd. See you next week for the much anticipated *fingers crossed* defeat of Ramsey Bolton.

Three Things I Think I Know

1 I’m starting to think that Cleghane Bowl is not going to happen.

3 Cersei and Qyburn had a cryptic exchange – it may involve wildfire and we may have seen something happen in Bran’s vision from Episode 6 that foreshadows what may happen in the Season Finale. Namely, the wildfire the Mad King booby trapped the city with. Could be a hot time in King’s Landing.

Three Things I Want To See

1 Drogon needs to find his brothers and destroy the Masters armada!

2 The return of Lady Mormont! Just a little scene of her putting someone in their place will do.

3 Sansa put the knife to Ramsey. She deserves to be the one to kill him. 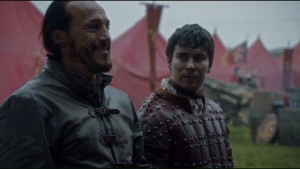 Special shout out to Bronn and Pod! Brienne and Jamie weren’t the only old friends that were reunited last night! Bronn teased Pod like an older brother. Now if we could only get Tyrion and the three amigos would be complete!

“I’m not No One. I’m Arya Stark of Winterfell and I’m going home.” Arya Stark

Next week we get The Battle Of the Bastards! Jon looks outnumbered. But The Army Of the Vale is on the way! I’m thinking this episode will just be about this battle. I’m very excited!