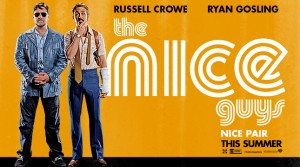 Russell Crowe in a comedy? Tough guy Russell Crowe? The Gladiator? Well, don’t laugh! Actually, you will, or at least, will be pleasantly surprised when you watch The Nice Guys, the new film by director Shane Black (Iron Man 3, Kiss Kiss Bang Bang). Crowe plays Jackson Healy, a tough guy (what else?) who will beat up people for a price. Ryan Gosling plays Holland March, an ex cop who has become, in his daughter’s opinion, ‘the worst detective ever!”. They get teamed up in a film noir plot to find a missing girl and encounter all sorts of odd characters along the way. 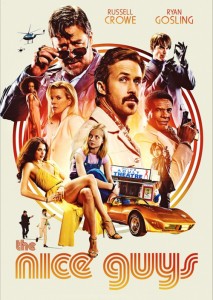 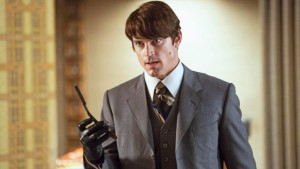 The real fun of the movie is the chemistry between Crowe and Gosling. They make a great pair. They’re like a modern day Laurel and Hardy. Crowe said he put on about 60 pounds for the movie to play up the physical differences much like Laurel and Hardy. Gosling gets to do a lot of physical comedy as well, especially early on in a scene where he is confronted by Crowe while in a bathroom stall. Gosling’s character has a young daughter who loves her dad but is also embarrassed by him. She’s eager to help him out and turns out to be a better detective than her old man! She also develops a nice relationship with Crowe as a sort of gruff but loveable uncle. 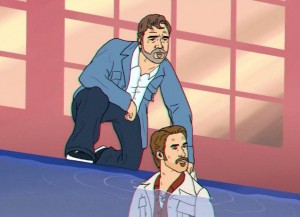 Kim Basinger looks great in a not very fleshed out role as Amelia’s mother who appears to be involved with the villains out to get her. Margaret Qualley who plays Amelia, is the daughter of Andie McDowell and is absolutely as beautiful. This is her screen debut but many may recognize her from the small screen as Justin Theroux’s daughter in HBO’s The Leftovers. Matt Bomer has fun as the John Boy look-alike assassin. 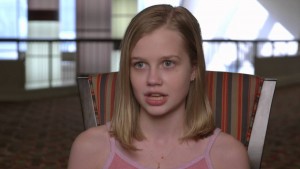 But the stand out is Aussie newcomer and fourteen year old Angourie Rice as Holly, Gosling’s daughter. She holds her own with Gosling and Crowe and becomes the third wheel in their tricycle of hijinks. Think Tatum O’Neal in Bad News Bears and you get an idea of where Miss Rice is headed with a little luck. 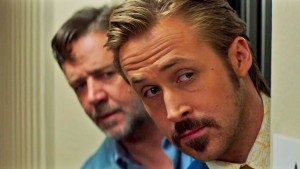 Shane Black is really in his comfort zone with this film. Black started his career as a writer of such films as Lethal Weapon, The Last Boy Scout, The Long Kiss Goodnight and The Last Action Hero. He made his directorial debut with Kiss Kiss Bang Bang in 2005 with Val Kilmer and Robert Downey Jr.. Kilmer and Downey had a similar chemistry in that film as Crowe and Gosling have in this one. Black makes guy films but makes sure he has a good looking guy thrown in the mix to attract the women. It used to be Mel Gibson, now it’s Gosling. In fact, I could easily see Gibson in the Crowe roles and if not for his being on Hollywood’s naughty list Black probably would have cast his old buddy.

The Nice Guys is not going to change your life. It’s a B movie, comic semi noir set in Los Angeles where film noir was born. It’s lewd, not politically correct and silly fun. And ‘hey girl’, it’s got that cute Ryan Gosling. What more do you want?