GAME OF THRONES RECAP S6EP6 BLOOD OF MY BLOOD 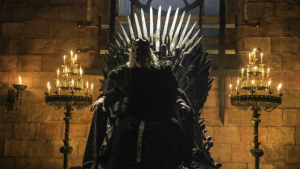 The first five episodes were action packed, fast moving, joyful and heartbreaking so it stood to reason that we needed a little bit of a breather to set up the end of the season, Episode 6 entitled ‘Blood Of My Blood’ served as a set up episode while still delivering a surprise or two. And was it just me or did everyone miss Sansa? What stronger blood is there but family blood. Arya realizes that, Bran sees his mother, brother and father killed in his vision. Jamie and Cersei seem more determined than ever to pit themselves against the world. Sam chooses his new family over the old. Believe me, there will much blood spilt in the coming episodes but not this one.
NORTH OF THE WALL

“The dead do not rest.” Uncle Benji 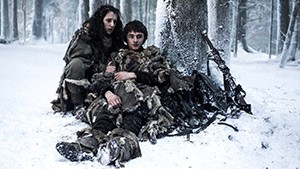 Meera and Bran are still trying to outrun the undead. Bran is still deep in a vision. He seems to be cramming a lot of history at one time as we see flashes from the past that include the Mad King shouting “Burn them all!”.

My friend Kristin Rozum told me an interesting theory of here the other day. She said, ‘what if Bran is able to communicate with the Mad King and the Mad King is telling Bran to “Burn them all!”” meaning the White Walkers and the undead?’ Bran’s vision at the open of this episode seems to allude to this very thing but we will see!

As Meera kept trying to wake Bran and apologizing to him, supposedly got Hodor, a man on a horse showed up with a mace of fire and saved them. As suspected, ‘the Crown and the Faith”.  The crowd cheers.  Jamie and the Tyrells cry! “What does this mean?”it was Uncle Benji and he addresses Bran as the new Three Eyed Raven. “You must be ready by the time the Night’s King finds his way to the world of the living. When he does you will be there to meet him” Benji tells him.

Sam brings Gilly and little Sam to meet his family. Mom and sis are happy to see them all! Dad, not so much. Gilly borrows a dress from Sam’s sister for dinner and she cleans up very nicely. But dinner was not so pleasant. Gilly has never used silverware before and Mom catches on but doesn’t say anything. Randall Tarley starts berating poor Sam with such contempt that Gilly steps up and starts defending him. She tells them that Sam has protected her and even killed a White Walker. But this gives away the fact that she’s a Wildling and brings further scorn from Mr. Tarley. He tells Sam that he will never inherit the family sword, Heartsbane, made of Valyrean steel. But much to my delightful surprise, Sam decides to leave the house that night and take Gilly, little Sam and Heartsbane with him! Goof for you, Sam!

“The girl had many gifts” Jaqen H’gar 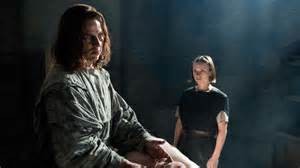 Arya watches the new play by the travelling troupe. This time we see a re-enactment of Joffrey’s wedding to Margery. Tyrion is shown as the villain who murders Joffrey and his father. Arya is the only one in the crowd laughing as Joffrey dies but Lady Crane’s performance as the grieving Cersei touches Arya. 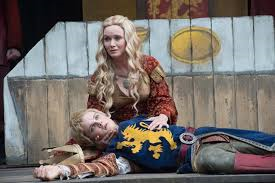 Nevertheless, Arya pours the poison into Lady Crane’s wine backstage. Lady Crane stops her before she can exit and shows an interest in Arya. Of course, before Lady Cranes drinks from her glass Arya knocks it away and pins the blame on the younger actress in the troupe who she spotted mouthing Lady Crane’s lines during the play. She’s a shrewd one, that Arya. Unfortunately, The Waif was there observing and reports back to Jaqen H’gar.

“Shame. The girl had many gifts.” Jaqen
“You promised me.” The Waif
“Don’t let her suffer.” Jaqen instructs but I don’t think The Waif plans to follow his instructions.

Meanwhile Arya goes to retrieve her sword, Needle, from it’s hiding place and plans to run. Of to join the acting troupe? It sets up a nice battle between Arya nd The Waif, this time for real.

“The gods have a plan for us all” Margery 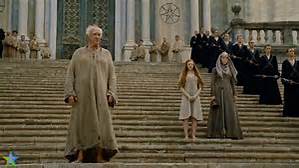 King Tommen and The High Sparrow are quite chummy these days. They discuss Margery’s Walk Of Atonement and HS tries to assure the young king that it Margery will be quite safe and even lets him see her. She seems to be keeping up the act for Tommen, convincing him that she has truly repented. 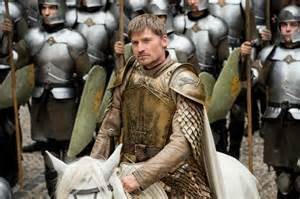 The battle I was expecting never arrives. Jamie and the Tyrell’s army march into the city and confront HS as he speaks to the crowd with Margery beside him. We’re all thinking she is about to make The Walk Of Atonement, though she still has all of her hair. Jamie rides up the steps and confronts HS demanding the release of Margery and Loras.  But HS remains calm and says there will be no need for violence today as there will be NO Walk Of Atonement. Margery has fully repented and brought in another to the Faith.  Out comes Tommen with his Kings Guard. Tommen takes Margery’s hand. He announces a holy alliance between “the Crown and the Faith”. The crowd cheers! Jamie and the Tyrells cry! “What does this mean?”, Mace Tyrell asks.

“He’s beaten us! That’s what it means!” Lady Olenna tells him. DRATS!

Tommen even goes as far as to fire Jamie from the Kings Guard and banish him from the city! He sends him on a  mission to help Walder Frey re-take River Run from the Blackfish, Brynden Tully. Cersei convinces him to go and do as he’s told. Jamie doesn’t want to leave her with her trial coming up but Cersei assures him it will be a Trial By Combat and she has the Mountain.  Somewhow I don’t think this will go as she plans. Cleghane Bowl, anyone? 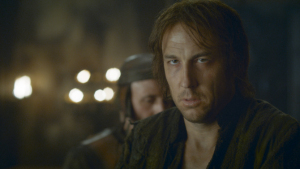 Meanwhile we got a Walder Frey sighting, berating his sons for letting the Blackfish take River Run back.  We also see Edmure Tully, still in chains and a prisoner. He will be used as a bartering tool. 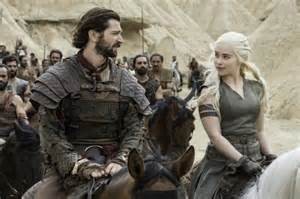 Dany and Daario are leading the Dothraki blood riders back to Mereen. Dany senses something and rides ahead. She reappears riding Drogon.  She lands in front of her new army and gives her ‘Henry V’ speech, imploring them to sail the wooden ships across the sea and take the Seven Kingdoms! Daario said they would need 1000 ships to take their entire army back to Westeros. Theon and Yara are on their way!

Charlotte, a slow fashion episode but what are your thoughts?

I got so excited this week, so ready to see Gilly get a makeover- knowing that no one’s parents would appreciate her showing up to dinner in a greasy potato sack. All hopes and dreams were sadly dashed however, once Sam and Gilly arrive at Horn Hill and we learn that all the women there wear printed 80’s prom dresses. Sure enough, they took a pretty girl and made her look shiny and puff-sleeved. 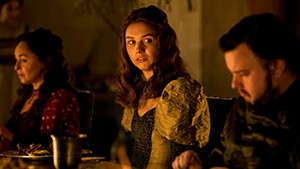 Meanwhile, back in Bravos, Arya is going for a much more creative look- bringing back the fanny pack and wearing a sweet cropped brocade bolero that I would so love to pair with some boyfriend jeans and ankle boots. The best was when she re-accessorized with Needle, which to me seemed to be a sign she’s taking back her old identity. I hope she keeps her new clothes though! 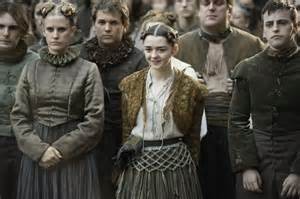 The last look that I hope everyone appreciated as much as I did was worn in Kings Landing by Margaery’s dad Mace Tyrell. He had on this really delicately beautiful blooming floral armor which I have since been stalking on Pinterest. I think it’s the traditional armor for High Garden, which further amplifies my obsession with that place.

This episode had some goodies! I’m looking forward to next week- see you then!

3 Things I Think I Know:

1 Margery is playing The Long Game and not even Lady Olenna knows what it is.

2 Tommen will die before Cersei does. Maybe at the hands of The Mountain. Irony anyone?

3 Jaqen H’Gar will follow Arya wherever she goes (if she doesn’t kill him also) He will not allow her to get away so easily.

1 Cleghane Bowl! It’s about time we see if The Hound is alive or not.

2 Will we ever see what happens inside The Tower Of Joy?

3 Brienne and Jamie reunited! They should both end up at River Run soon!

“Burn them all!”  Mad King Aerys

Who Is Next To Die?

Until next week! Keep studying Bran’s vision for clues!

Previous GAME OF THRONES RECAP: S6EP5 THE DOOR Next THE NICE GUYS