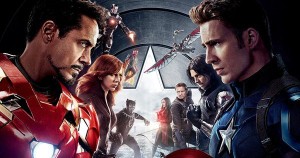 More Avengers movie than stand alone Captain America sequel, Captain America: Civil War is a whole lot of fun by any name. Better than Age Of Ultron and deeper than most super hero films (including the dour Batman v Superman) Civil War seamlessly weaves together plot lines from previous films while introducing two new heroes to the mix to create a classic Summer Blockbuster that should satisfy everyone.

The movie’s focus is on friends (Super Friends!), the limits of friendship and the collateral damage from all this world saving that’s been going on lately. Cap’s old friend, Bucky (Sebastian Stan), is at the heart of the action. The film has a cold open that shows some of Bucky’s back-story and how he was programmed by some evil Russians to become a killing machine. We see Bucky chase down a car while on a motorcycle and run the car off the road. He opens the trunk to find a briefcase containing five medical bags of blue liquid. We don’t know how this will figure in later but it will in a big way. 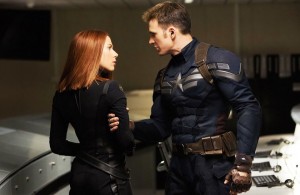 “This job… we try to save as many people as we can. Sometimes that doesn’t mean everybody. But if we can’t find a way to live with that, next time… maybe nobody gets saved.” Steve Rogers

Cut to the present. One year after the action in Sokovia that ended Age of Ultron. Cap (Chris Evans) and friends are on an op in Nigeria. It ends tragically when Wanda Maximoff, Scarlet Witch (Elizabeth Olson) tries to divert a bomb with her telekinesis and it blows up a part of a building causing many casualties. Not good. Elsewhere we see Tony Stark (Robert Downey Jr.) confronted by the mother whose son died in Sokovia due to the Avengers saving the world from Ultron, which Stark is also responsible for creating. Stark is so troubled by this that he agrees to go along with Secretary of State Thaddeus Ross (William Hurt) and a UN plan called the Sokovia Accord which would put the Avengers in check, basically review threats to the world on a case by case situation and then determining IF The Avengers should be called to action. Well Cap will have none of that and will not agree to sign. When an explosion at the UN occurs during the announcement of the Accord, Bucky is seemingly the culprit. Cap knows he will be hunted and wants to find him first knowing that he would be killed on sight. Ross allows Stark to assemble his team to go after Bucky. And so Tony Stark and Captain America end up on opposite sides. 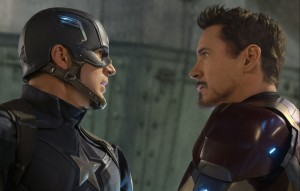 Cap and Stark need to beef up their respective squads however so they begin recruiting. Cap recruits the retired Hawkeye (Jeremy Renner) and Falcon (Anthony Mackie) comes through with Scott Lang, the Ant Man (Paul Rudd). Stark finds a teenager who dresses up as a Spider and gets his aunt to agree to let him go with Stark to Berlin! Tom Holland is perfect as Spiderman and Marisa Tomei is one hot Aunt Martha!! Looks like Stark thinks so, too. 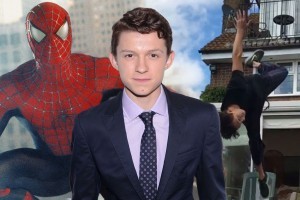 Stark also gets T’Challa aka Black Panther (Chadwick Boseman) on his side. His father was killed at the UN explosion and he desperately wants to see Bucky die. Boseman is really good here. I am very much looking forward to seeing the stand alone Black Panther film based on his performance here and the word that Lupita N’Yongo has joined the cast. 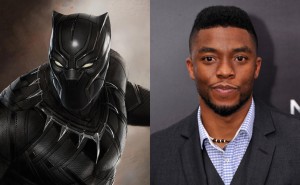 Cap and Stark show up at the Berlin Airport to have the showdown that everyone sees set up in the trailers. Stark’s Squad consists of Rhodey, Vision, Black Widow, Black panther and Spider Man. Cap’s Crusaders has Bucky, The Scarlet Witch, Falcon, Hawkeye and Ant Man. The battle at the airport is great fun! Paul Rudd and Tom Holland provide big laughs as the newcomers to the Avengers world and their excitement to be included with these heroes is infectious giddy fun! I don’t want to say any more about the outcome of this battle royale or the last third of the film which brings a big reveal and ultimate mano a mano between Cap and Iron Man. Suffice it to say the film is filled with great moments and great action sequences. If you’re already a fan of the Marvel films you will be very satisfied and will probably want to see this one again. 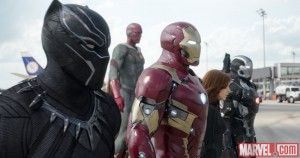 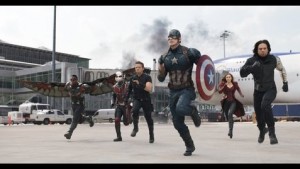 Anthony and Joseph Russo are the directing brothers team that also did Captain America: Winter Soldier and are signed on to do the next two Avenger films. I feel the franchise is in excellent hands.

As far as the actors in the superhero suits, they all have their moments. Downey Jr. does get to flex his chops in this one and gets some juicy moments concerning his deceased parents. Boseman brings a great energy as Black Panther. Daniel Bruhl (Inglorious Basterds) is also very effective as Helmut Zemo, a Sokovian colonel-turned terrorist who turns out to be pulling the strings of these super heroes in a revenge plot that I did not see coming. 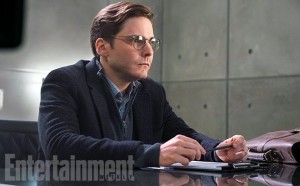 There’s nothing too complicated here. This is a great Summer action movie! But if you’re not into super hero action there’s Money Matters with George Clooney and Julia Roberts and A Bigger Splash with Ralph Fiennes and Tilda Swinton currently in the theaters. I’ll be doing reviews for those coming soon!