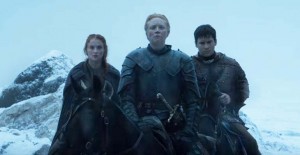 Reunited! And it feels so good! I was worried that Jon Snow would leave castle Black before Sansa arrived but right at the start of the episode, “Open the gates!” We got the Stark Family reunion we have waited so long to see!

Sansa is seeming more and more like someone who could be Queen. I think she is destined to sit on the Iron Throne!

Women Power was on full display in this episode as well! Sansa, Brienne, Cersei and Daenerys are all making power plays and taking charge!

Edd asks Jon where he’s going to go. “South”, Jon says. And do what? “Get warm.”
But while Edd tries to convince Jon to stay on as Lord Commander someone arrives at the gates. I was so excited to see this happen straight away. The gates open to reveal Brienne, Pod and Sansa! Wow! It was such a thrilling moment!  Tormund looked as if he was hit by a lightening bolt as he gazed lovingly at Brienne. Now that’s a match made in heaven! But when Sansa and Jon’s eyes meet there wasn’t a dry eye in all of nerdom! They had some catching up to do!

How ya been? What’s new? You died? You look great! I got married! It’s not working out.

Sansa has plans though. She wants to take back Winterfell. Jon is weary. He doesn’t want to fight anymore and he feels like he has failed. Sansa asked him where he was going. “Where will WE go.” he says to her. It’s a sweet scene.  Sansa even apologizes to Jon for being such a brat back in the old days. “We should have never left Winterfell.” Jon says. But then we wouldn’t have a show! 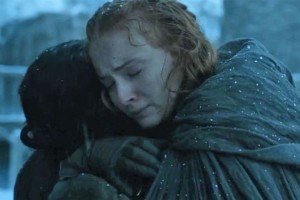 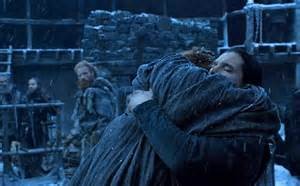 But later, while they dined on fine Night Watch cuisine and in between flirtatious looks from Tormund towards Brienne, a letter arrives. The Ramsey Bolton Letter. The Bastard Letter. Jon reads it aloud. Ramsey has Rickon and wants to trade him for Sansa. It’s an insulting letter as Ramsey refers to Jon as ‘bastard’ and calls himself Lord of Winterfell and Warden of the North. When Jon gets to the part about Sansa he stops reading but Sansa takes the letter and finishes reading it. Sansa has become so strong! She urges Jon to gather an army of wildings, crows and Northern families still true to the Starks and march on Winterfell to take back their home. Jon nods his head in agreement. The reluctant hero but what else can he do?

“A monster has taken our home and our brother. We have to go back to Winterfell and save them both.” Sansa

There was also a great scene with Brienne, Davos and Melisandre. Apparently Davos still doesn’t know what happened to Stannis or Stannis’ daughter, Shireen! But before Melisandre could say anything Brienne approaches them. She tells Davos she was with Renley when he was murdered by Stannis using blood magic. She says Stannis admitted it right before she executed him. She warns Melisandre that she hasn’t forgotten or forgiven. There will be a reckoning!

Osha! NO! Osha tries to seduce Ramsey with the thought to murder him but he was on to her and as she grabs his knife from the table Ramsey stabs he in the throat. At least she went down fighting. But it was a shame to see her go so soon after her return to the show! She was a great character. She will be missed. 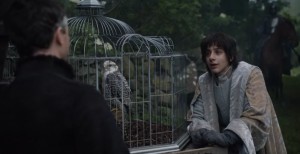 Little Finger is back! And he is doing a lot of dancing to explain how Sansa ended up in the hands of the Boltons. But he has the sickly young King Robin under his spell and knows how to manipulate him. He convinces him that they need to go rescue Sansa from Castle Black! How will Sansa greet Lord Baelish? With a slap I hope! 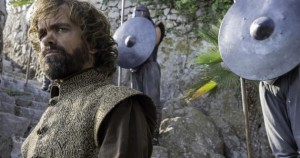 Tyrion holds a meeting with the Masters to come to an agreement to stop the uprising. He offers to allow them to keep slaves for 7 years to wean them off the practice. They agree and Tyrion seals the deal by bringing in some female companionship for the boys. Missandei is repulsed. Tyrion also assures the Mereen delegation that Daenerys is returning soon and the deal he’s made with the masters is a good one. He gets Grey Worm and Missandei to back him up but they are none too happy. I don’t think Daenerys will be willing to honor this deal. I’m not sure what Tyrion’s plan here is. He is trying to avoid a battle by making concessions. Is he just stalling until Daenerys returns? Or can he command the dragons he made friends with last week to do his bidding and get rid of these masters once and and for all? 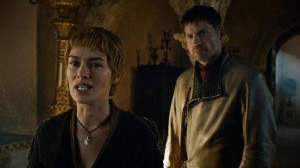 Poor Margery! She almost had me fooled! She is putting on an act for the High Sparrow, pretending to be repentant. HS seems to be taken by her act and allows her to see her brother, Loras. He’s a mess. She urges him to stay strong but he looks broken. A tower of jello.

Tommen warns caution to Cersei when dealing with the High Sparrow. He’s been spending time with HS and is worried about Margery. It seems like Margery is preparing to do her ‘Walk Of Atonement’. Cersei and Lady Tyrell finally agree on something. They cannot allow this to happen. They plot a confrontation with the Faith Militant.

“Many will die no matter what we do. Better them than us” Lady Tyrell

My thoughts exactly. But something tells me HS and his lads have something up their sleeves. 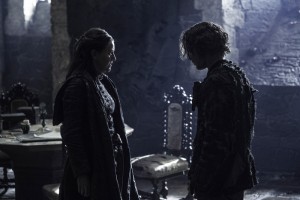 Ah, The Iron Islands! Theon is home just in time for the rainy season! Yara is angry at him for not going with him during her failed rescue attempt. “He broke me into pieces.” Theon tells her. “Yes, he sent us one of those pieces.” Yara says. Yuck! But they’re still brother and sister and he has vowed to help her sit on The Salt Throne as Pyke’s ruler. 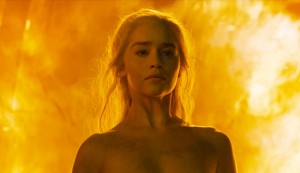 While Ser Jorah struggles to climb those Essos mountains, Daario taunts him.
“You can’t ride the dragon.” And he is not referring to Drogon. Jorah tells him this is no time to fight each other, they have a queen to rescue! They sneak into Vaes Dothrak without their weapons and immediately run into trouble. But before Jorah is choked to death Daario stabs his assailant. He’s very fond of his naked woman handled dagger.
While the boys skulked around town, Daenerys was making nice with the dosh khaleen. Then she used that old trick “I have to go make water” She is escorted out by one of the younger former khaleesis and just as they got clear of the temple the boys show up! Daenerys tells them there is no way to escape and that she has a plan. Of course she does.

When she’s brought before Khal Moro and his men she is defiant. Khal Moro tells her they will all take turns with her before killing her but Daenerys is not impressed.

Whoa! Then she sets the place on fire. The Khal and his men try to escape but the door has been locked (good work, boys!) They burn to a crisp! The whole city stands outside the Vaes Dothrak and watch it burn. Then they see her! Walking out of the fire! Naked as a dragon! They fall to their knees! Even the boys take a knee! She’s done it again! Another world conquered! Hot Damn! 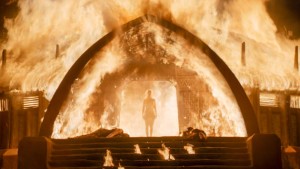 Here I was, thinking that Daenerys needed saving! I’m glad they ended this plot point so soon and so well. Things are moving so fast this season. We need Daenerys back in action. More importantly we need to see her dragons back in action!

“Many will die no matter what we do. Better them than us” Lady Tyrell

Who is next to die?

Well, I didn’t see Osha falling so soon. That was a shame. I’m sticking with Tommen or Margery.

Next week we see Bran meet the Night’s King! But when will get back to The Tower Of Joy!!!!