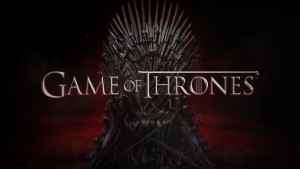 Last weeks episode was so good that this week’s episode couldn’t possibly reach that high. But Episode Three entitled Oathbreaker is still filled with important moments that are setting up the rest of the season. Obviously, the most anticipated scene was the fight at the Tower of Joy. And we’ll get into that. But first Jon Snow desperately needs a strong cup of joe and an aspirin.

“Where did you go? What did you see?” 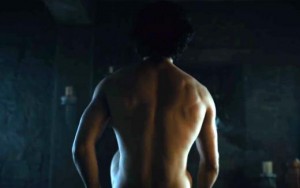 “They stabbed me. I shouldn’t be here.”

Melisandre is eager for answers, too. “After you died, where did you go? What did you see?”

“Nothing. There was nothing at all.” Jon tells her.

So that’s the Game Of Thrones philosophy. No Heaven, no Hell? Just this bleak world. 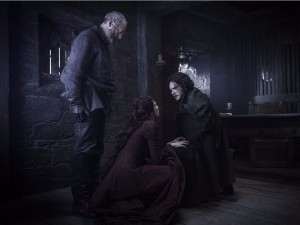 “You go on. You fight as long as you can. You clean up as much of this shit as you can.” Sir Davos tells Jon. So you died a little! Shake it off! When he enters the courtyard everyone can’t believe their eyes. Tormund is so happy to see his old frenemy! “They think you’re some kind of God” He tells him. Good. This will be helpful when he leads them in battle. It’ll be like El Cid’s dead body mounted on his horse except Jon is still alive.

Sam and Gilly are on a three hour tour and Sam is tossing his cookies left and right. Sweet.

The Tower Of Joy Part One 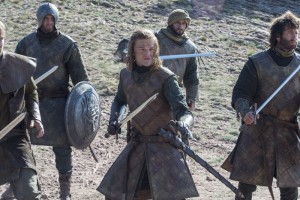 Bran and Three Eyes visit another important moment in Stark History. Ned Stark, Howland Reed (Jojen and Meera’s father) and 4 other friends approach a lone tower in the middle of nowhere (actually near the Dorne border) which is being guarded by 2 knights of the Kings Guard (3 in the books). The Mad King has been killed by Jaimie. Robert Baratheon has already killed Rhaegar Targaryen. But these two knights skipped the main battle. They have been charged with protecting whoever is in that tower. 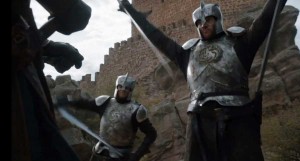 We already know who is in that tower. Ned’s sister, Lyanna. Ned is there to ‘rescue’ her. One of these knights is Sir Arthur Dayne, the Sword Of the Morning, the best swordsman Ned Stark ever saw. He uses 2 swords! These two guys take on Ned and the magnificent six and wipe the floor with them! Leaving just Ned to battle Sir Arthur Dayne. “He’s better than my father. But my father beats him.” When Sir Arthur knocks Ned’s sword from his hand it looks to be over but we know Ned doesn’t die here. And just as Sir Arthur is about to kill Ned he is stabbed in the back by Howland Reed! He was only injured not killed. We hear screaming coming from the tower. Ned starts up the steps when Bran calls out “Father!” Ned stops. Did he hear Bran? What? Holy crap!

They are setting the stage for a Bran – Ned Stark meeting! Maybe Sean bean comes back for a cameo? It could happen. Ned starts up the steps again and Three Eyes stops Bran and brings him back from the vision. We are going to have to wait for the Ned-Lyanna scene where we will find out for sure what Ned promised his sister. Take care of my baby? My son? My Jon? 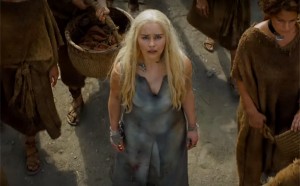 Daenerys is brought to the Dothraki’s only city and meets the Khals Wives Club.
This is not a cheerful group. I guess they’re just supposed to stay in that temple and grow old and die. Great tradition. But don’t worry, Daario and Sir Jorah are on the way! 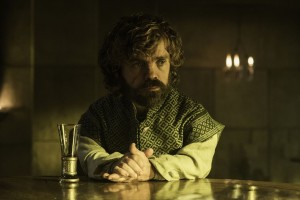 Varys gets information on who is behind the Sons Of The Harpy: The masters of Astapoor, Yunkai and Valantis. Makes sense. Now what? I love the scene where Tyrion tries to have a conversation with Grey Worm and Missandei who just seem confused.

“The history of the world is told by great conversation.” Tyrion
“Who said that?”, Missandei
“Me. Just now.”, Tyrion

Maester Clyburn has gathered Varys’ ‘little birds’ to bribe them with sweets to work for him now. Fickle kids. Clyburn is just a creep. I thought for sure he was going to poison them to make play things for his Frankenstein Knight. We get to see Jamie meet The Mountain and tease him. Do Not Tease The Mountain! Cersei plans to defy the High Sparrow and request Trial By Combat with The Mountain as her champion. Her revenge is coming. But will it go as planned? She needs the Martells on her side, right? She and Jamie can’t do it alone. Tommen wants to be strong for his mom and his queen but when he goes to confront The High Sparrow backed by his King’s Guard he gets manipulated pretty easily. Oh, Tommen, your reign will be short, may not last the season. 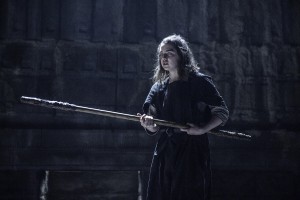 Arya continues her training with The Waif in a nifty montage of The Waif beating the crap out of her and showing Arya smelling some medicinal powders? Poison? Maybe creating an antidote to poison? By the time she seems to be able to defend herself Jaqen H’ghar returns and brings her to the fountain. He tells her ‘if a girl says her name she will get her eyes back.” Arya tells him “a girl has no name.” Jaqen fills a cup with water from the fountain and hands it to Arya. A drink from this fountain usually means a painless death. Arya hesitates but Jaqen assures her “a girl has nothing to fear if she’s telling the truth.’”She closes her eyes and drinks. When they open again she can see. You know she concocted some antidote to the poison. A girl has a list. A girl is determined.

Ramsey is trying to shore up support from the Northern tribes and not getting much respect. But he is brought a gift by one of the tribe’s leader. The long lost Osha and Rickon! The tribesman also produces the bloody head of Rickon’s dire wolf to prove to Ramsey that this is truly a Stark. What will Ramsey do with him? I hate to think. If he’s smart he’ll use him as a bargaining chip to get Sansa back.

“My watch has ended”

Jon Snow is back and the first order of business is to hang those murderous traitors that killed him. “It’s time.”, Eddison tells Jon and Jon goes to confront the four remaining traitors. “Any last words”, Jon asks. “You shouldn’t be alive. It’s not right.”, one says. One asks Jon to write his mother and say that he died fighting the White Walkers. Thorne is most eloquent.

“I made a choice. Betray you or The Night’s Watch. I fought. I lost. Now I rest.”

And he held his head high in the confidence he made the right choice. Ollie, however had no words, just a face filled with hatred. Jon hesitated a long while before cutting the rope and looked quite haunted watching them dangle to their death. he knows where they are going. He’s been there.

When it was done he took off his cloak and handed it to Eddison.

“My watch has ended.” And he walked away.

Who is the Oathbreaker?

Well, since he actually died he has kept his oath to be in the Night’s Watch until death. But, I suppose since he’s alive again that makes him an oath breaker.

Arya also breaks an oath, by cheating the poisonous water from the fountain. If Jaqen finds out will she may lose more than her eyes.

Ramsey asks for an oath of allegiance from the Northern tribes but his father broke his oath to Robb Stark so why would Ramsey be trusted?

Daenerys broke her oath when she married Khal Drogo that when she died she would do as all other wives of dead Khals do and retire to Vaes Dothrak.

And what of Ned Stark? We have yet to know what he promised his sister but we can guess. He didn’t break that oath. But did he break one with Howland Reed?

Charlotte, what was your take on this weeks’ Westeros fashion?

I have to first point out that the best look of this episode was Jon Snow’s naked backside, and the worst look was when Sir Davos threw a blanket around him.

The most frequently worn style of this episode is one that I haven’t seen worn in the real world yet- the leather pullover: Grey worm chose one with tiny circular studs and accentuated shoulders. Definitely my favorite if I had to choose one to wear myself. Sam’s leather pullover was quilted, and covered with his sweat and puke. Gross. Nothing makes motion sickness more uncomfortable than wearing a thick leather shirt. Jon Snow’s leather pullover wins the prize for most flattering, though he could literally wear a Hawaiian shirt and khakis and he’d still look amazing. 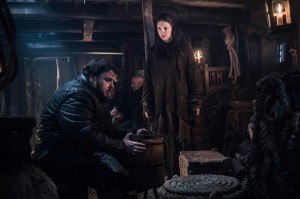 Other things worth mentioning: Ned Stark’s lifetime consistency with the half up, half down hairstyle: I never really realized while watching this show that it was a trademark look for him, but I’m grateful that it is because that Ned flashback would’ve been confusing without it.

Jaimie Lannister’s beige asymmetrical zippered skirted leather jacket: I don’t know if I could pull it off, but I want it. 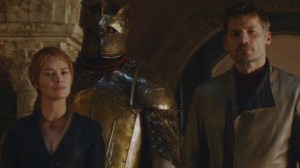 Marjorie’s mother’s scarf hats: she wear a different scarf hat every time she appears on this show, no news here- I just brought this up because I’m really confused about the location of High Garden. Where is it? Can we go? It sounds like it’s pretty.

Anyway, hope the next episode shows us some more Meereen styles because they’re so good. See you next week!

Thanks Charlotte! Next week we’ll be posting a video chat with Charlotte to discuss the episode!

My Favorite line from this episode:

“Nothing. There was nothing at all.” Jon Snow

The ramifications of Jon’s death experience have changed him. Now he knows all there is is the here and now.

Who is next to die?

Hey I was right with my prediction from last week. Au revoir, Ser Alliser!
Next episode is tougher. It could be Margery or Tommen. I think they attempt a rescue.

Until next time! Valar Morghulis!!!