Wow! Even as I am writing this at 1230am my mind is still spinning from everything that happened in this episode! I have had a theory brewing since the fourth season and I was starting to worry if it had any validity any longer. Well, by the end of tonight’s episode, ‘Home”, I’m happy to say it does. More on that later. And we’ll hear from Charlotte Radwell on the fashion sense this episode. Mostly bloody!

Spoilers Ahead! If you haven’t seen the episode yet venture no farther! 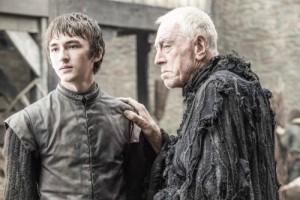 Apparently, The Three Eyed Raven (Von Sydow) can show Bran the past. We watch them observe a rather benign day at Winterfell circa 40 years earlier. We see young Ned Stark and young Uncle Benji practicing their sword fighting skills. We get our first glimpse of Ned’s sister, Lyanna, a spirited lovely woman who seems to be very friendly with a large overgrown stable boy called Willis aka Hodor!!! 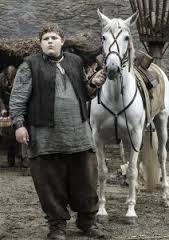 “Hodor talks!” Bran says in amazement as everyone was. What happened to cause him to stop talking? Bran wants to stay in this time longer but 3 Eyes brings him back to the present and their cave dwelling. “It’s beautiful beneath the sea but if you stay too long you drown” 3 Eyes tells him.

It looks like we will be seeing more flashbacks via 3 Eyes and Bran’s time traveling. We will probably see whether R+L= J and how that transpired.

The showdown finally happens as Thorne and the Black Watch gang try to break into the room to get Jon Snows body and kill Sir Davos and the last shreds of the Snow alliance. When they started using a battering ram on the door I started yelling “We need a giant! Where’s the giant?” And right on cue! Our giant comes to the rescue along with Tormand and the wilding gang. In the first of many gruesome deaths in the episode, one Watchman shoots an arrow into the giants shoulder which just pisses him off. Gruesome death #1: He grabs him and slams him against the wall then throws his limp bloody body to the ground like a rag doll. That was enough for the Watch gang to throw down their arms much to Thorne’s disgust! Little Ollie still had some fight in him but Tormund handled him like the little boy he is.

As we all know, soon the White Walkers will be upon them so these guys are going to have to make up and join forces. The old ways of thinking are gone. The Wildings and Watchmen will need to fight side by side.

When Tormand sees Jon’s dead body he says that he’ll have his men gather wood for a funeral pyre. But if Jon Snow is a Targaryen would he even burn? Would we be given the chance to see?

“The Mountain Knows All”

Gruesome death #2. Some drunken commoner is bragging how he shagged Queen Cersei, bad mouthing Jamie, (“Jamie Lannister is half an inch shy of an inch”). When he goes to take a piss he is surprised to find a monstrosity of a creature standing behind him. The Mountain shoves his head into the wall and his brains came pouring out. All in a day’s work as Cersei’s one man wrecking crew. 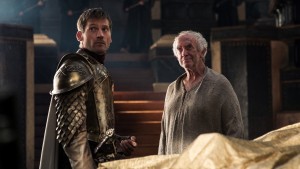 Jamie has a tense run in with The High Sparrow (Jonathan Pryce). Threats were exchanged. But The High Sparrow had the numbers. Is it just me or does The High Sparrow look like Bernie Sanders? The messy gray hair? He even sounds like him! “Every one of us is poor and powerless yet together we can over throw an empire.” A future we can believe in anybody?

Tyrion. He gets braver each season and he gets the best lines!

They are quickly losing control of the city. The slave owners are taking back control. Tyrion comes up with a plan to assert authority. Why don’t we let those two dragons loose that have been chained up since Season Four? Dragons don’t do well in captivity. But what will two hungry dragons do when they have the run of the kingdom? Since dragons are smart, smarter than men some think, Tyrion decides to go visit those dragons. Since he is their friend they will sense it and not burn him into a charred nugget. 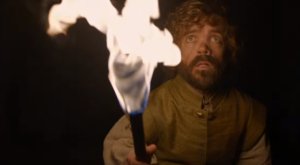 Great scene! Tyrion approaches cautiously, “I’m friends with your mother”, and tells them a story of how, when he was a boy, he had wanted a dragon for his birthday. Then he reaches over and removes the bolt from their collars. They’re free but will they listen to him? My bet is on Tyrion. He drinks and he knows things.

“You’ll always be my first born”

Well, Lady Walda had a boy! Good news! Not to Ramsey. And not for Roose, Walda and baby Bolton. Instead of handing his father a cigar, Ramsey shivs him in the gut. 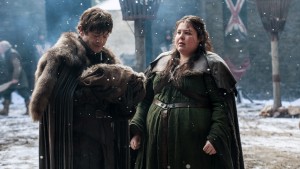 Gruesome death #3: But the real treat(s) is the one Ramsey gives his beloved hounds. He leads Walda and her newborn to the kennel where he, one by one, opens the door to each dog’s cage. Walda begs for her life and for her baby to be spared.

“I prefer to be an only child.” Ramsey tells her then lets loose a whistle.
Lunch boys! And of course we needed to hear a loud crunch as the scene cut away. 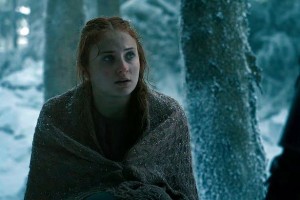 Meanwhile, Sansa’s headed for Castle Black to get Jon’s protection. Word hasn’t traveled yet that he’s dead. (Or is he?) Theon isn’t going with her. He’s headed back to Pyke. I’m not sure what he hopes to accomplish. His sister still loves him.

Lord Baylon’s assault on the North hasn’t gone well. Just like his last attempt to conquer the North. Then while he tries to stroll across a shaky wooden bridge in the middle of a hurricane he is confronted by a guy who calls him ‘brother’. Is this his real brother? Seems too young. At any rate, the guy tosses Lord Baylon over the bridge and to his death on the rocks below. So much for family ties. Now this fellow and Yara are going to fight to be the leader of The Iron Islands.

Arya got beat up again by The Waif. Apparently this was enough for Jaqen H’ghar. He takes some pity on Arya and allows her back inside for further training but he hasn’t given her sight back yet. She’ll need to prove to him that she really believes she is ‘No One’ and has renounced her name. Can she really do that? She has a list that needs tending to.

Alright. The moment we’ve all been waiting for. I told myself if it didn’t happen in this episode maybe he is really and truly dead and then my beloved theories would be out the window! Well. Everyone was right! Jon Snow lives again!

Sir Davos had to really pump up Melisandre’s ego to get her to agree to even try. Her confidence has been shattered. But she finally agrees to try. Sir Davos, Tormund, Eddison and Ghost were present though Ghost looked bored. There was Jon Snow’s naked body with only a wash towel covering his privates. Calm down ladies! Melisandre cleaned off his body and started taking hair samples. She cut hair from his head and his beard. No pubic hair sample? Ok. She put the hair in the fire and started her incantation. Nothing. She kept repeating it. Nothing. This is getting embarrassing. She utters, “Please!” but still no life in Jon’s body. Ghost fell asleep. One by one everyone left the room. I knew if anything was going to happen Ghost would sense it first. Come on, Ghost. Wake up! Ghost! Come on! Then. His head popped and looked at his master. Yes! Cut to Jon. And just like Jack Shepard waking up on the island in Lost, Jon Snow opened his eyes and started breathing! 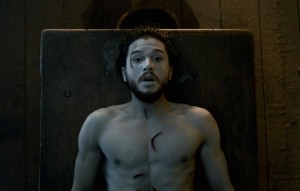 OK. So we all figured he had to come back. The ground work was laid. But how will he be different if at all? Beric Dondarrion said that every time he was brought back he was a little different. Now The Lord Commander is back and he has an army of Wildings that are willing to fight for him. And he’s going to need them. Ramsey Bolton with support from the Carstarks are preparing an assault on castle Black to retrieve Sansa. She hasn’t got there yet but she will. And what about Walder Frey? Won’t he be pissed about the murder of his daughter and grandchild? Will he take a part in this battle in the North?

The Starks are turning into quite a formidable force much like the family in The Incredibles! The god Jon Snow back from the dead with his sidekicks the Onion King and his Giant, Dolorous Edd, Arya the deadly assassin, Bran the Warg, Sansa the…..beautfiul Queen and Rickon…..well I’m sure Rickon will have some new talent by now.

Now I need to share my theory, one I have had since Season Four. It concerns the Final battle for Westeros. There are three dragons and there will be three heroes to lead those dragons. Daenerys will be sitting on Drogon, Jon Stark will be sitting on another and Bran Stark will be inside the third. He will have warged into it. Together they will conquer the White Walkers and save the day. What do you think?

Charlotte, in between all that death and reanimation what did you think of the fashion sense in this episode?

I have to start out by saying that this episode was pretty drab. I can appreciate the effort of sewing together random animal hides in no specific silhouette out of a need for functionality, though.

1. The lady who lives in that creepy tree:

That was a really cool updo. If I had gone to my high school prom I might have considered that one. 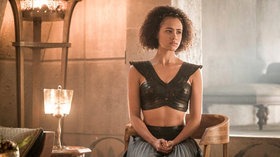 I would totally pair that with a high waisted chiffon skirt and go to a party where people could appreciate the mix of hard and soft fabrics. 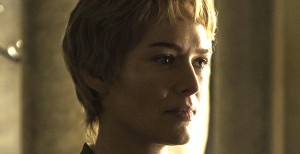 For optimal results, pair this hairstyle with a lighter colored gown than she did.

As uneventful as this episode was for fashion, I don’t mind because Jon Snow!! See you next week, you puppy lover.

My favorite line from this episode?

Who is going to die next?

Jon needs to make an example of Thorne. So off with his head!

That does it for this week! I’ll probably watch this episode a few more times before the next episode. A great one!