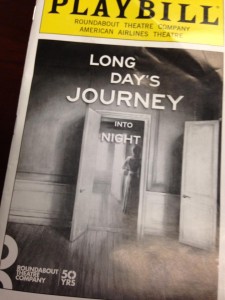 I grew up loving movies. I was also sure I wanted to be an actor in the movies. Once in high school I figured I’d start out on the stage. So I started reading and performing in plays. One of my favorite plays was Eugene O’Neill’s magnum opus Long Day’s Journey Into Night. It was his most personal play. In it, he depicts his own family, his morphine addicted mother, his miserly father, his drunken pathetic older brother and himself, as the sickly younger son. It’s an emotionally grueling, heartbreaking masterpiece. Eugene O’Neil wrote it, put it in drawer and said he never wanted it performed while he was alive and left written instructions that it shouldn’t be performed until 25 years after his death. It was first performed in 1956, three years after his death to critical acclaim. It won the Pulitzer Prize in 1957.

I was drawn to Long Day’s Journey Into Night because of my own family dysfunctional issues. We all have them to varying degrees. This is what makes this play so immediate, even today. It is a walk dawn the darkest halls of love and hate, regret and shame, faith and despair. Anyone who has had a family member addicted to drugs or with mental problems will recognize the characters in this play.

The play takes place on a single day in 1912 at the beach cottage of the Tyrone family. Patriarch James Tyrone (Gabriel Byrne) an aging theater matinee idol who very much loves his wife, Mary (Jessica Lange). It is made clear that she has gone through rehab, going to a sanitarium, as they called it back then, and has been her old self. But her concern over the health of her youngest son, Edmund (John Gallagher Jr.) has caused her nerves to fray. This has not only her husband worried but their oldest son, Jamie (Michael Shannon). They’ve seen her get clean and fall back on the morphine before many times. Mary can see the worry in their eyes and this just makes her even more undone. 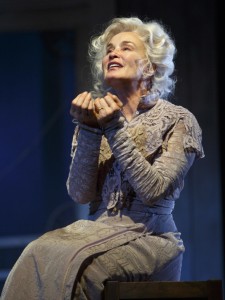 “The past is the present, isn’t it? It’s the future too.”
Mary Tyrone

As the day continues, we see how the past can never be put behind any of them and how it has damaged the present. James is an alcoholic. His son Jamie followed in his footsteps as both an actor and alcoholic. Young Edmund also likes the drink but he’s gone off on his own, away from the family. He’d spent a few years working on ships and found a love for the sea. He’d become a writer, just starting to get published. There may be a brighter future for him. But the ‘Summer cold’ Mary keeps saying he has is much worse. It’s consumption (tuberculosis). He would need to go to a sanitarium. They try to keep it from Mary for fear that the news would push her to start using again but for all their carefulness and hopefulness she ascends the stairs and they know. It will begin again and by nightfall she’ll be far away from them again.

Long Day’s Journey Into Night is a dark play. It is a long play and in the wrong hands could be tough to endure. However, this production is in good hands. The cast is excellent. It is a thrill to see Jessica Lange command the stage. She had me in tears as she struggles to keep from falling into despair and as she gradually fades away into a morphine fog as thick as the fog that begins to engulf the night outside the windows of their home.

MARY
You’re welcome to come up and watch me if you’re so suspicious.
JAMES
As if that could do any good! You’d only postpone it. And I’m not your jailor. This isn’t a prison.
MARY
No. I know you can’t help thinking it’s a home

Lange uses her voice like a fine instrument, sliding from gregariousness to shrieking anger and then to quiet bitterness. There are no choices left to her. They’ve all been taken away by her marriage to this drunken actor whom she loves “despite all his failings”. By the end she appears as if she were a ghost wandering through the broken lives of the three men who love her but can’t even help themselves. 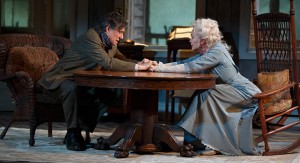 “Oh, we’re fools to pay any attention. It’s the damned poison. But I’ve never known her to drown herself in it as deep as this. Pass me that bottle, Jamie. And stop reciting that damned morbid poetry. I won’t have it in my house!”
James Tyrone

I was really impressed with Gabriel Byrne. I’ve been a fan of his going back to Gothic (1987 Dir. Ken Russell) and Miller’s Crossing (1990 Dirs. Joel and Ethan Cohen). He’s playing a drunken Irish actor who’s given to overacting and exaggeration. This is the kind of part where someone could really chew up the scenery and try to impress the audience with his ‘acting’. Byrne plays it just right. He walks the fine line of playing all of these qualities and still staying inside the part, inside the play. He loves his wife so much. Byrne conveys this so well at the very start that you completely sympathize with his utter disappointment at the very sight of her at the end. 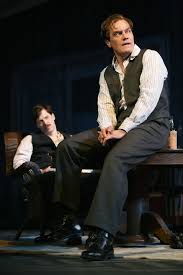 “If you can’t be good, you can at least be careful.”
Jamie Tyrone

Michael Shannon (Boardwalk Empire, Midnight Special) is perfect as Jamie. An utter disappointment as a son and as a namesake but he loves his younger brother. He’s always been there for him to show him the ropes about booze, women and their mother. But his tongue can be as cruel as it is witty. Jamie disappears for much of the second act and I kept waiting and wondering when he’d return. When he does it’s like a shot of adrenaline. Shannon really gets the audience going with some much needed laughter. But then even the laughter becomes tainted when Mary comes down the stairs one last time carrying her wedding dress and faraway eyes.

Edmund immediately strikes Jamie and cowers in shame and guilt.

“Who wants to see life as it is, if they can help it? ………….”
We are such stuff as manure is made on, so let’s drink up and forget it.”
Edmund Tyrone

John Gallagher Jr. plays Edmund Tyrone, O’Neill’s version of himself. Gallagher even wears the same mustache that Eugene O’Neil will later become famous for. Edmund is the starry eyed romantic, viewed by his father as weak. Gallagher and Byrne have a lovely scene in Act Two where they reveal themselves to each other seemingly for the first time and they begin to have a deeper understanding of each other. Edmund chastises his father for being so stingy that he would send him to the state sanitarium rather than a better facility that would be a few dollars more. He shames him into saying he would send him anywhere he wanted ‘within reason and his means’. James explains to his son why he came to be so stingy and why he rails at his boys for not knowing the ‘value of a dollar’. Edmund tells his father of his love for the sea and shows his flair for words and poetic musings.

“Oh lad, you have the making s of a poet in you but that morbid sense of death!”
James Tyrone

The final speech, delivered by Lange, as the three men can only watch in horror emotionally spent, and incredibly drunk is mesmerizing. It’s a wonderful experience. It runs nearly four hours with one 15 minutes intermission but its well worth it. When the play ended and the lights came back up for the actors to take their bow I saw Byrne blow a breath of relief. “Got through another one.” Indeed they all did and as they walked off the stage Lange and Byrne put their arms around each other like athletes after a hard fought victory. Bravo. 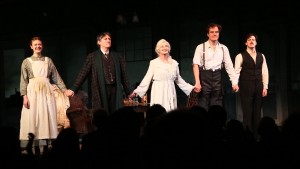 Long Days’ Journey Into Night is being presented by The Roundabout Theater Company and playing at The American Airlines Theater 227 W. 42nd Street in Manhattan through June 26th. http://www.roundabouttheatre.org

Previous MILES AHEAD Next GAME OF THRONES S6EP2 ‘HOME’