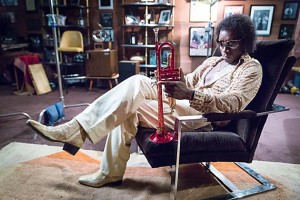 “If you’re going to tell a story, come with some attitude man.”
Don Cheadle as Miles Davis

So begins this semi-factual, dream like story about Miles Davis. Don Cheadle acts, directs and co-wrote this film and, man, does he bring the attitude. This was obviously a love project for Cheadle that was 10 years in the making. Cheadle is a fine actor and he plays the hell out of this part. Just as it was with the Chet Baker bio pic Born To Be Blue, that came out last month, this is another attempt to capture the ‘spirit’ of a musical icon and pay homage to a musical great. Miles Davis was a mystery man, always guarded and protective of his private life. He was a difficult person to deal with and he didn’t suffer fools gladly. He also had trouble with drugs and with being an abusive husband but he was also a musical genius and his music is timeless. Does on excuse the other? This is the question that is always brought up about many artists that may have lived less than ideal lives or were even downright assholes. Some can’t separate the two. For myself, I can. Cheadle seems to embrace both sides in his presentation of the man, the artist and the icon. 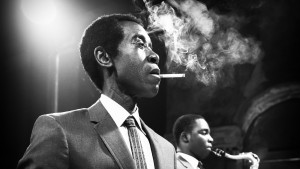 “Don’t call it jazz man, that’s some made up word. This is social music.”

While Cheadle the actor delivers on attitude, Cheadle the director also brings some attitude. He chooses to make the year 1979 the present. Davis spend the late 70s’ holed up in his apartment, not making music or even picking up his horn and spending $500 a day on cocaine. He was in a tailspin and his label, Colombia was desperate for a new album. He had supposedly recorded a session but wouldn’t let anyone listen to it. Enter journalist Dave Braden (Ewan McGregor) who claims to have been sent by Rolling Stone and his label to do a story on his comeback. Davis refuses to deal with Braden but as fate (or the script) would have it, they become uneasy allies as David battles studio execs, gadfly girlfriends, agent/gangsters, rising new jazz trumpeters, and the memory of one of his ex wives, Frances Taylor (Emayatzy Corinealdi).

“Studied piano too, huh?
“Naw, just woke up black. Knew how to play.” 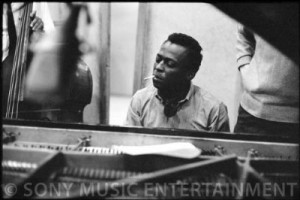 Cheadle creatively weaves in flashbacks to his relationship with Frances which the film insinuates he was at his career peak when he was with her and started to fall into a dark hole when they finally parted ways. It’s obvious he regrets losing her. He mistreats her the whole time they’re together not only physically but emotionally. In once scene he is on the phone with her, begging her to quit her dancing job in Paris to come back and be with him. Once she agrees, he hangs up the phone and returns to the two naked white women in his bed to continue their love making or maybe ‘sex session’. He was not a nice man. 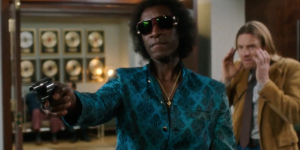 In the present (1979) Davis is a coke head with degenerative hip issues and suffering from sickle cell anemia. The plot line here is a little comic and is the weakness in the film. Cheadle’s Davis with Braden in tow, spends 24 hours in a madcap series of events that culminates in a car chase and shoot out! Miles Davis actually gets shot! Did any of this happen? No. But the idea is that it captures the ‘spirit’ of where Davis was at this time in his life. It leads him to a reawakening of his need for music as saving grace and Davis would make a big comeback in the 80s with a whole new sound that brought him back to public attention before his death in 1991.

“It takes a long time to sound like yourself.” 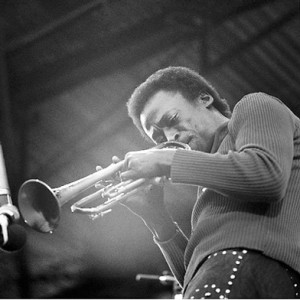 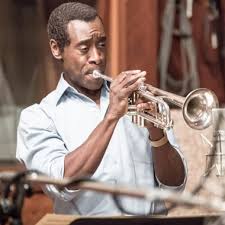 I give Don Cheadle a lot of credit here. He puts Miles Davis on screen warts and all. His performance alone is worth the price of admission. After this year’s Oscars So White uproar there would be a riot in the streets of Los Angeles if his name is not said when the nominations are announced next January. His directorial debut is also promising and I hope he takes more time from his ‘Avengers’ gig to direct more films. He’s got a sure touch.