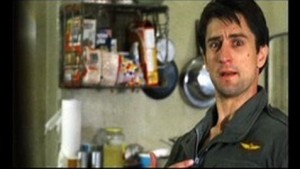 Jane Rosenthal and Robert DeNiro strolled onto the stage at The Beacon Theater. DeNiro began to speak, with a real energy in his voice, which is usually a rare thing indeed. “40 years. Every day for 40 fucking years one of YOU have walked up to me and said….what do ya’ think?” And with that cue the audience said in unison, “YOU TALKING TO ME!!”. Soon after this little interaction with the audience the 40th anniversary screening of Taxi Driver began. 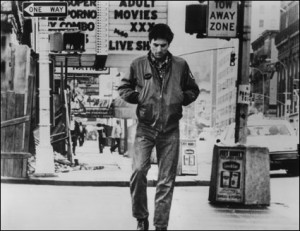 Taxi Driver is a seminal 70s film and a time capsule of New York City circa 1975. It also happens to be one of my favorite films. It personifies the quintessential 70s film: character driven, highly intense and personal, unafraid to delve into difficult places, emotionally charged, the human condition laid bare. Travis Bickle, from the very start, is a troubled person. He keeps a journal and we hear his voice as he writes and it provides a narration through the film. He pulls us along on his journey and we hear his darkest thoughts. He can barely communicate with other people, unable to express himself or perhaps afraid to really say what he’s thinking. He comes close with Betsy (Cybil Shepard) but he is so socially inept and awkward he scares her away. His chance meeting with a twelve year old prostitute (Jodie Foster) gives him another opportunity to connect with someone. His isolation takes a bigger and bigger toll until he snaps.

In the Q and A that followed the screening, writer Paul Shrader explained that he wrote the script as a form of “self therapy”. He was afraid he was becoming like the character of Travis Bickle and that if he could write about him he could channel those feelings into the script and away from himself. 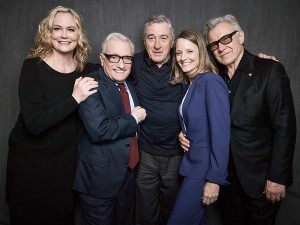 Producer Michael Phillips reflected on receiving the script from neighbor Brian DePalma and described his feeling after reading it as ‘looking into a naked soul.”

When Martin Scorsese was asked what his reaction upon reading the script was, he seemed as at a loss to describe it now as he says he was then. “ I can’t describe it in words.  It just had to be done. That was it.”

The way Scorsese explains it, the film was something they not only wanted to do but had to do and they had to do and quick because all of their careers were starting to take off and other projects were set so time was running out. “Bobby was working with Bertolucci and Kazan, Paul (Shrader) was about to direct his first film, Blue Collar with Harvey (Keitel), we had to do it to get it out of the way!”

Jodie Foster revealed that she had to take a four hour psych test to get The Board of Education to approve her work permit which they were denying her. They felt the film was too violent and the subject matter to adult for Foster, was thirteen at the time, to be a part of. Obviously she passed the test. She also said she hated the clothes she had to wear and feared she would be made fun of from her friends. She especially hated the hot pants, platform shoes and silly glasses. “The first day, when I saw that outfit, I cried.” 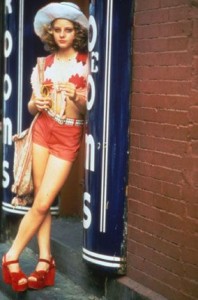 Cybil Shepard was very enthusiastic about being at the screening and very proud to have been a part of the film. She has been in The Last Picture Show (1971) and The Heartbreak Kid (1972) which were two big hits but her next films (Daisy Miller and At Long Last Love) directed by then boyfriend Peter Bogdonavich were both big flops. Shrader admitted he had her in mind as he wrote the part of Betsy and let Scorsese and Phillips know that but they never thought she would do it. When super agent Sue Mengers, who represented Shepard, heard that they were casting the part and looking for a ‘Cybil’ she asked Shrader, “How about Cybil?” Shrader said he didn’t think she’d do it.  Mengers pushed “Have you asked her?”  Shepard was more than happy to be in the film.  She saw it for what it was, an opportunity to be in a quality film and a career boost.  Unfortunately, the career boost didn’t transpire. 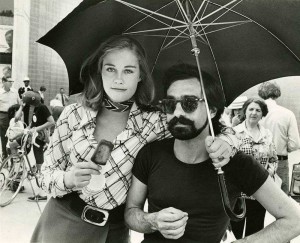 Shepard also talked about how working with Elaine may on The Heartbreak Kid helped her prepare to improvise on Taxi Driver, specifically the scene in the diner with DeNiro. Her scenes with Albert Brooks most certainly were also improvised as Shrader admitted Brooks’ character was underwritten. “Marty likes to cast a comedian in parts that are underwritten to make them more interesting”, Shrader said.  But, of course, the most famous scene in the film is DeNiro talking to the mirror and playing with his guns. “You talking to me?”. All DeNiro improvising as Scorsese encouraged out of frame.

Harvey Keitel was asked if it was true that he worked with an actual pimp to learn how to do it.  Keitel was not willing to talk about it and instead went into the story of how he and Scorsese first met, when he auditioned for Scorsese’s first feature film while at NYU. After he finished the story, which was great, Scorsese yelled, “Talk about the pimp!” It took a little more prodding but then he finally relented. 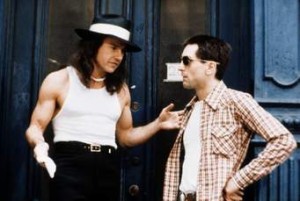 They didn’t take questions from the audience but one of the ones I had was brought up by the moderator and discussed. In the climactic barrage of violence as Travis goes to ‘save’ Iris (Foster) he lays waste to everyone in his way and ends up shot and bleeding out in Iris’s room surrounded by dead bodies and blood. The cops come in, guns raised, to find he him there, blood pouring out of the gunshot in his neck and Iris curled up in a corner scared out of her mind. Scorsese cuts to a shot from above the room, surveying the carnage and tracking out of the room and into the hallway. How did they pull this off with a small budget and short shooting schedule? Scorsese explained that they were shooting in a condemned building so when they discussed the overhead shot they just decided to remove the ceiling and shoot down from the apartment above. Scorsese said it took three months to prepare but when it came down to shoot the scene they only had twenty minutes because the Board of Labor wouldn’t allow thirteen year old Jodie Foster to work longer than that on that night.  Foster apologized to Scorsese 40 years after the fact. She also said that she really enjoyed shooting that violent scene and was fascinated by the prep that went into it. Clearly a sign that she would later became a director herself. 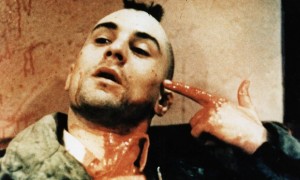 The subject of Bernard Hermann then came up. Hermann had worked with Orson Welles (Citizen Kane) and most famously with Alfred Hitchcock (Vertigo, Psycho) and Scorsese was a long time admirer. He sought out Hermann who promptly said to him, “I don’t do films about cabbies!”. Once he had read the script he liked it. He especially liked the scene where Travis pours peach brandy over his cereal. He agreed to score the picture. “I hear brass”, he told Scorsese. Producer Michael Phillips said Hermann was very difficult to work with and would constantly threaten to quit but he finished scoring and recording the score for the film on December 23rd, 1975.  He died later that night. The score is magnificent and is very much a character in the film. Shrader said he was surprised that Scorsese sought Hermann to do an actual score for the film since, as he put it, “Marty is a needle drop man.” Meaning he used a lot of songs in his films.  Scorsese slightly protested and responded that he grew up listening to a lot of music so it felt natural to use songs in his films. “But Travis never listened to music.” So it didn’t fit to populate the film with songs of the day. Shrader said that Scorsese did want to use two songs: “ Late For The Sky” by Jackson Browne and a Barry White song, meant to be used for the scene where Keitel seduces Foster and they dance. “There is No other music in a film I score!” Scorsese said Hermann told him. But he did manage to get the Jackson Browne song in. It’s playing in the scene where Travis is watching American Bandstand. “You won that one but you weren’t getting Barry White”, Shrader told Scorsese.

One of my favorite bits in the film is at the very end.  Travis has dropped off Betsy at her home and is driving away. As he does you see his eyes in the overhead rear view mirror. Travis thinks he sees something and the film is sped up as he moves to adjust the mirror to take a better look.  It’s a very unsettling moment and one that is intended to signal that Travis may still be a danger. Scorsese mentioned this scene and that he asked Hermann for a little something extra, musically at that moment. “You mean a ‘sting’” Hermann told him. “Ok, yes, a sting, if that’s what it is.” Scorsese told him.  Hermann then instructed someone to hit a note on the xylophone. He did this a few times and then they  recorded it. Scorsese didn’t quite think this was enough or what he was after.

“Play it backwards!” Hermann yelled and left the studio.  That was it. And that’s what you hear in the film. 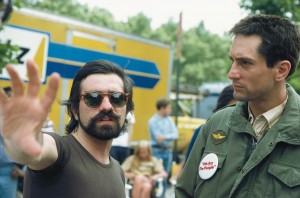 Previous THE DEVIL AND THE DEEP BLUE SEA Next Game Of Thrones Recap: The Red Woman S6EP1