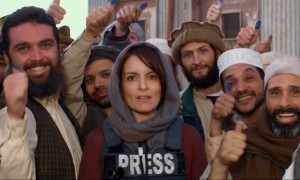 Over the years, many stand up comedians have made the next step to being in the movies, some more successful than others. The ones that were successful making comedies eventually try to expand their range and fan base by making a ‘dramedy’ or even go full on drama. Robin Williams and Steve Martin were successful in becoming thought of as more than just comedy actors. Adam Sandler did not, although I really liked Punch Drunk Love. Tina Fey is a unique case. She started out doing improvisational sketch comedy with Chicago’s Second City then joined SNL as a writer and sometime performer. She won several Emmys as a writer for SNL but she really catapulted into the limelight when she took over doing Weekend Update, first teamed up with Jimmy Fallon and then Amy Poehler. She turned that new found popularity and got a sitcom deal with NBC which turned into 30 Rock. Her fame and Emmy wins started growing. Of course, movies would be the next step.

Her film career has been ‘sketchy’. Fey is incredibly smart and clever and funny but that hasn’t always translated into completely successful films. In Whiskey Tango Foxtrot, Tina Fey may have found her “Private Benjamin’. Fey plays a TV journalist Kim Baker, who is offered an opportunity to go to Afghanistan as a correspondent, mostly due to the fact that she is single with no children. She does have a live in boyfriend played by Josh Charles (The Good Wife) who is not too thrilled about her new assignment but with the understanding that it is only for a few months he supports her. Before you know it she’s in Afghanistan and living in a compound filled with war zone experienced correspondents, photographers and interpreters. It’s the perfect set up for your traditional ‘fish out of water’ scenario. Kim quickly becomes friends with Tanya, a gorgeous Australian correspondent (Margot Robbie) who tells her that back in New York she was probably a ‘4 or 5’ but in Kabul she’s an ‘8 maybe a 9!’. She slowly adjusts to the rigors of the job as well as well as the restrictions placed on a woman in that society. She is greatly aided by her Afghan helper, Fahim, played nicely by Christopher Abbott (Girls). 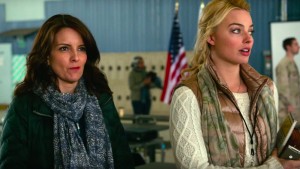 As she gets better at the job and comfortable in the manic environment of the correspondent’s compound, she decides to stay longer than planned which puts a strain on her relationship and eventually leads her to start an affair with a lecherous Scottish journalist, Iain, played with incredible charm by Martin Freeman. Kim also develops interesting relationships with a Marine general (Billy Bob Thornton) who gives her a hard time but comes to respect her tenacity and Ali Sudiq, a local Afghan government official (Alfred Molina) who develops a crush on her which Kim uses later on to assist her in a daring rescue mission. Kim embraces her new life and newfound strength and purpose. She is good at this and the nervous awkwardness that Fey plays so well becomes confidence and fearlessness. But, as movies do, there’s a third act twist that forces Kim to face some tough choices both concerning her job and her newfound friends. 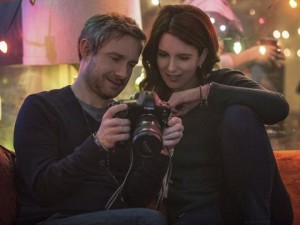 Fey brings her comic charm and timing to the role but also gives her character a real vulnerability. This is a real person in a dangerous situation and the movie doesn’t pull back from this. The movie shows some hard realities of war and the film moves deftly into that area without feeling forced. The script is based on the memoir The Taliban Shuffle: Strange days in Afghanistan and Pakistan by Kim Barker about her reporting experiences. Writer Robert Carlock, making his feature film debut wrote the adaptation. Carlock wrote for SNL and 30 Rock under Fey’s tutelage and obviously knows how to write for her and bring out her strengths. Credit also goes to the director team of Glenn Ficarra and John Requa whose previous films, Crazy, Stupid Love and Focus were also sharp, funny films with strong performances.

Whiskey Tango Foxtrot is not Salvador or Live From Baghdad. It’s not trying to be. It’s a film about someone who thinks their life is going to be one thing and then makes a bold decision that leads her to find that her life could be different. In fact, it could be better than she imagined. It’s funny, it’s sad, it’s touching. It’s a journey. It’s what a good movie should be. And it could be a turning point for Tina Fey’s film career. I’m interested to see where it leads.

Previous THE WITCH Next BATMAN VS SUPERMAN: DAWN OF JUSTICE