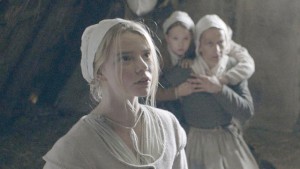 I’m not big on horror films. I’ve seen parts of the original Friday The 13th and I’ve never seen Halloween or Nightmare On Elm Street. But I loved the original Alien (1979) and John Carpenter’s The Thing (1982) and I’m a big Walking Dead fan so I do like some work in the horror genre.  The Witch is a dark fable, a low budget, low broil horror story. It quietly ratchets up the suspense almost as if we’re watching a documentary. It’s more unsettling than horrific. The devil is involved so we call it horror but it’s not a gore fest or built just to shock and scare. It’s a slow burn. I found it quite effective and while I wasn’t jumping out of my seat it did give me ‘the willies’.

The film was written and directed by Robert Eggers and filmed in Ontario, Canada. While this is an American production the film definitely has a European flavor. The acting is realistic as is the setting. It’s very spare. The film takes place in 17th century New England territory. A farmer has angered the community he and his family live in and they are exiled.  The farmer, his wife, young daughter Thomasin, son Caleb, and their twins, a boy, Jonas and a girl, Mercy, journey out into the middle of nowhere until they come to a clearing that the father deems is the perfect place to build a farm and start a new life. The wife soon gives birth to another son and things seem to be going fine until, that is, Thomasin, while looking after the baby, encounters a stranger near the woods. Thomasin looks away for a moment and the baby is gone! 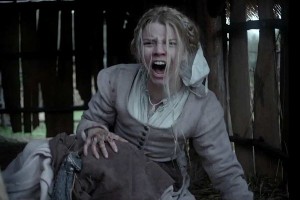 Things progressively go from bad to worse. The mother blames Thomasin for the disappearance of the baby.  The twins claim that the black goat they tend to, Black Phillip, speaks to them. Strange happenings start to pile up. It’s really as much of a psycho-drama as it is a genuine horror film. The family starts blaming each other. Their isolation drives them further apart from clear thinking. There’s also a religious aspect. The father, in committing the sin of pride, gets his family cast out of society and makes them all vulnerable to dark influences. Even as they cling to their beliefs for comfort and safety, they begin to feel the hopelessness that they have been abandoned by God. It builds very nicely to a shocking and surprising conclusion. 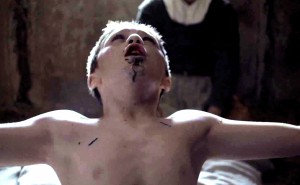 The Witch, is well made, well acted and tells its story clearly and with chilling moments. Anna Taylor-Joy is especially good as Thomasin. It’s the kind of horror film I can appreciate. It offers more than cheap scares. It’s a camp fire scary story. And that’s scary enough for me.

Previous BORN TO BE BLUE Next WHISKEY TANGO FOXTROT