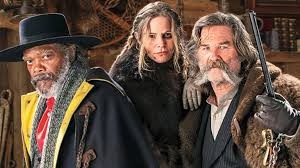 I went to see The Hateful Eight Road Show while it was still happening which meant while theaters were still showing it in 70mm Panovision actual film! There were no previews or commercials of any kind before the film started. There was an Overture. There was an intermission. There was also a souvenir book available with plenty of pictures from the film and a little back story. This was an old school movie experience. One I never really experienced before since they stopped showing movies like this back in the early 60s. But I remember when I was a kid that my dad had all these cool books of epic films that we would watch together, films like Spartacus (1960), The Fall Of the Roman Empire (1964), El Cid (1961) and How The West Was Won (1963). These films were called ‘epics’ for the size of the story, the characters, the production and the presentation. They stopped making movies like that by the time I was born around the time films became more intimate, personal and character driven. Every once and a while a film comes out that you could tag ‘epic’ – your Godfathers, your Saving Private Ryans, your Dark Knights but not like the ones they used to make.

The Hateful Eight is not an epic. It is shot on the same type of film that epics used to be shot on. It was Quentin Tarantino’s way of paying tribute to those types of films and the way that big films were presented in the old Hollywood days. It is beautifully shot by Robert Richardson who has worked with Tarantino before (Kill Bill, Inglorious Basterds, Django Unchained). The film is also a tribute to the Western. Tarantino’s favorite film is Sergio Leone’s The Good, The Bad and the Ugly. So he had Ennio Morricone compose the music for The Hateful Eight. The film mostly takes place in one room, one big room where 8 ‘bad’ people take refuge from a snowstorm. It was very much like a play, the kind of dark, bloody plays that Martin McDonough likes to write and which I enjoy very much. I also enjoyed the Hateful Eight. 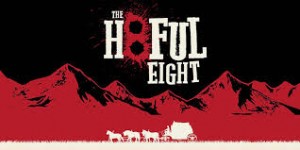 Kurt Russell is John Ruth and Samuel L. Jackson is Major Marquis Warren and they are bounty hunters trying to take their prisoners to Red Rock to collect the bounties. Warren’s prisoners are dead and so is his horse which is why he needs to hitch a ride on the stagecoach carrying Ruth and his prisoner, a hard woman named Daisy Domergue wonderfully played by Jennifer Jason Leigh, to Red Rock. Ruth and Daisy are handcuffed together for most of the film and this creates an interesting dynamic between the two which includes Ruth yelling and punching Daisy a lot. But she’s a tough one and she just wipes off the blood and grins after these encounters. After some macho back and forth between Ruth and Warren, Ruth allows Warren to join them and as they continue their journey Warren reminds Ruth that they’ve met before and this leads Ruth to ask Warren about ‘The Lincoln Letter’. It’s well known that Warren has a letter actually written to him from President Lincoln and he uses it as a calling card to social circles he would otherwise be denied being a black man in the 1870’s.

Suffice it to say ‘The Lincoln Letter’ comes into play quite a bit later in the film.
As with all of Tarantino’s scripts, nothing is said or introduced that doesn’t have layers of meaning or intent. This is what makes him an excellent screenwriter. His use of language is as distinct as Mamet and just as incendiary at times. Once again, the word ‘nigger’ is used many times but, considering the story takes places a few years after the Civil War and some of the characters fought on the Confederate side, it certainly is not out of place.

Once all these characters meet and are holed up in Minnie’s Haberdashery to wait out the storm the real fun begins. None of these fellas trust each other, except Ruth and Warren and that’s really a business arrangement to protect each other’s prisoners, dead and alive so they can collect the bounties. Besides the stagecoach driver, O.B. (James Parks), they pick up another straggler, the supposed new sheriff of Red Rock, Chris Maddix (Walton Goggins) who has yet to put on the badge officially. Already at Minnie’s is Bob ,“The Mexican” (Demian Bechir), o crusty old Confederate general, Stanford “Sandy’ Smithers (Bruce Dern), a British dandy, Oswaldo Mobray (Tim Roth), and a quiet cowboy, Joe Gage (Michael Madsen). Most of these actors are Tarantino regulars and know how to deliver his material but Walton Goggins really stood out for me. Goggins played Shane Vendrell, one of the many crooked cops on The Shield (2002-2008) and then the criminally eloquent Boyd Crowder on Justified (2010-2015). He shines as Chris Mannix and has some of the funniest and best moments in the film. Kurt Russell does a fine John Wayne drawl through his “Tombstone’ mustache. Samuel L. Jackson gets to deliver one of the most intense speeches in a Tarantino movie. And Jennifer Jason Leigh is fantastic as Daisy. She has been an excellent actor for many years but never seemed to get her due. Now after being away from movies for awhile she’s back in a big way and hopefully back to stay. 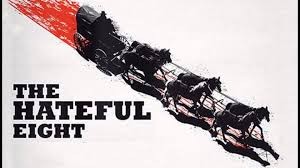