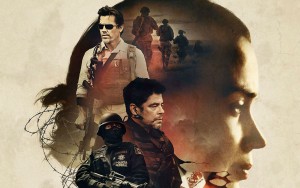 One reviewer said that this movie was what the second season of True Detective should have been. If so, it would have been a helluva lot darker than season one.

Sicario, directed by Denis Villenueve (Enemy, Prisoners), is a dark, gritty thriller about the Mexican drug cartels and what lengths the U.S law enforcement and the CIA are willing to go to make a bust. The film is like entering a nightmare and morning never comes.

The film opens on a kidnapping raid in Arizona led by FBI agent Kate Macer (Emily Blunt). They make a grizzly discovery of dozens of bodies buried in the walls and then one of the team comes across a booby trap and the explosion kills two officers. You can see the toll this takes on Kate. She’s seen too many scenes like this and it never seems that any progress is made. Enter Matt Graver (smug Josh Brolin) a CIA operative looking to put together a task force to go after the group responsible for what happened run by this big drug cartel boss. Kate idealistically volunteers and she and her partner begin their strange partnership with Brolin and his ‘partner’, Alejandro Gillick (the gloomy Benecio del Toro). What follows is a dark journey that starts from a small border town and leads into Mexico. The whole time Kate and her partner seem to be merely observers to a string of events they have no control over. The audience is in the same position. You’re just along for the ride and the movie makes no apologies for the behavior onscreen. 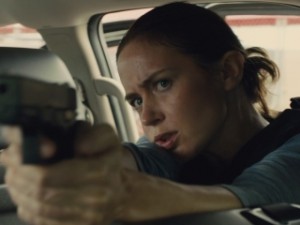 If you’ve seen Prisoners, which starred Jake Gyllenhaal and Hugh Jackman about the search for two missing little girls and the toll it takes on the parents and the detective heading the case, then you will be prepared for the bleakness of Sicario. Personally, I like films that deal with dark subject matter and go to dark places especially if it’s done well. Sicario is done very well. It’s beautifully shot, sad twilight skies and sad hopeless faces fill the screen. It’s also well acted by a strong ensemble that includes Victor Garber (Alias) and Jon Bernthal (The Walking Dead). Del Toro’s droopy eyes and intensity work well here. Josh Brolin with his devilish grin and cockiness talks while Del Toro glares and they make a scary team. Emily Blunt has a difficult part. She’s the lead and she’s also the audience’s POV into the movie. She does a lot without saying much. She conveys everything with her facial expressions and physicality. She really has become the kind of actress I never expected after seeing The Devil Wears Prada. She has really diversified and shown off her talent in recent years. She became an action star in the wonderful 2014 film Edge Of Tomorrow with Tom Cruise. She proved she can do musicals with Into The Woods. She should be on the A List now. She proves in Sicario she is a formidable actress to be reckoned with. Director Villanueve’s next movie will be the sequel to Blade Runner. My guess is there will be plenty of ‘tears in the rain’ but no white doves flying in slow motion to the heavens.

Previous THE WALK Next STEVE JOBS