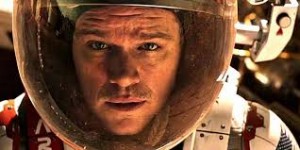 Space. The Final Frontier. It still thrills us. The space rescue film has been done before, some based on actual events (Apollo 13 1995), some fictional (Gravity 2013) and some so bad they made delightful comical fodder for Mystery Science Theater 3000 (Marooned 1969). So we’ve seen this type of film before done well and not so well. We’re an audience that demands something new and authenticity has never been so expected.

The Martian is a crowd pleaser. It has that loveable Matt Damon (despite his recent misstatements on racial and sexual equality in Hollywood), a large ensemble cast of familiar and likeable faces, a space adventure, a rescue mission and director Ridley Scott. It can’t miss! And it doesn’t.

The Martian is based on the novel of the same name by Andy Weir. It tells the tale of the Ares III Mars mission which runs into a Martian sandstorm and must quickly abort and blast off back to Earth, leaving a man behind. You never leave a man behind! That man is Mark Watney (Damon) and, in all fairness, they had good reason to believe he was dead. But Watney is alive and must find a way to survive until the next manned Mars mission can come back for him….in THREE YEARS! Much like Tom Hanks in Cast Away, Watney must use his ingenuity to make the oxygen last, to ration the food and find a way to communicate to NASA that he is still alive. Fortunately, he’s a botanist and a good one! (The best botanist on Mars!) Watney manages to find a way to set up a ‘farm’ in his controlled environment in order to grow potatoes meanwhile the world is mourning his death back on Earth. 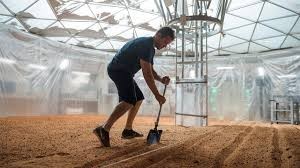 Once NASA notices some movement on Mars they work out a way to communicate with Watney who has smartly recovered the Pathfinder probe, defunct from 1997, and frantically plan a way to send him food and supplies to last him until the Ares IV mission can rescue him – in three years!

Jeff Daniel’s is great as the head of NASA who butts heads with Flight Director Sean Bean (Ned Stark!). Bean feels the crew of the Ares III should be told that the man they left for dead is still alive but Daniels is worried that it might affect the crew’s current mission. Bean eventually does an end a round and Watney’s crewmates end up volunteering to turn back and go get their boy! Jessica Chastain is strong as the captain of the Ares III. Michael Pena and Kate Mara provide some lighter moments as fellow Ares III crew members. Chiwetel Ejiofor gives fine support as Mission Director Vincent Kapoor.

But it’s Damon’s show. He’s the glue that keeps the film together and propels the action. He gibes a very natural, nuanced performance. You feel his anguish and struggles and you’re rooting for him. This is a hip hip hooray kind of movie! You need a worthy hero and Damon gives you one.

The film is long at two hours and twenty minutes but it never feels padded or loses steam. Damon keeps us captivated and the ensemble works just as hard to get Watney home as they do in keeping the audience entertained and engaged.

Ridley Scott redeems himself for Prometheus at least until the Prometheus sequel is released. Let’s hope the energy and excitement he put into this film also goes into that one.

Previous EVEREST Next THE WALK